The Shortness of Life 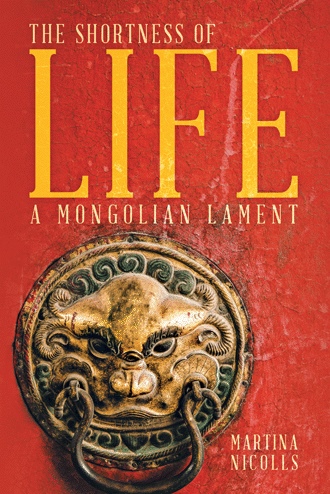 CHAPTER 4 – THE DOG AND THE NAKED MAN

Everything has beauty, but not everyone sees it

Jorja Himmermann arrived in Mongolia in January in the middle of the nation’s coldest month in the country’s longest, bleakest winter on record. Mongolia’s high elevation, and its remoteness from the sea, categorized the climate as extreme continental. Typically, winter temperatures oscillated between minus twenty degrees and minus thirty-five degrees Celsius. However, the winter of 2010 consistently pushed daily temperatures to minus forty-two degrees. It was brutal to the extreme: punishing and life-threatening. Often the wind was unrelenting, reaching forty-four kilometers per hour. Not for the faint-hearted or faint-skinned, the wind cut, stung, and burnt Jorja’s pale skin until it turned red raw.
Construction was booming, especially during the previous five years, but when snow fell, it was temporarily halted; when the wind whipped up, it was halted again, and when the temperature dipped below minus thirty degrees Celsius, it ceased. For the most part, construction ceased in the winter of 2010. Beside her apartment, in the vacant plot of land, pipes, construction equipment, and snow-covered machinery remained in the same place untouched, unmoved. A wooden hut on stilts provided shelter for the guards, but the yard dogs roamed free, leaving paw marks in the snow. The sheep dog, never seeking protection from the elements, seemed to be a statue of security. Solid and square on the white ground, the bankhar rarely moved. Every morning, at the first glow of sunrise, Jorja glanced out of her bedroom window to observe the weather and the great mastiff. In the evening, before switching off the light, she glanced into the construction site to look for the sheep dog. It was always there. Each time she would scrutinize his eyes to check whether they were open, to check their color, and to check whether it was observing her. If the male guards were not present, the great mastiff’s eyes remained closed. Perhaps it detected people by their scent or movement. In any case, it appeared to be a most effective sentinel. Jorja decided that he needed a name, for she had determined that he was indeed male, and she called him Brik.
After switching off the bedroom light, and before climbing into bed, she’d peek out of the side window to the fifth floor below to see if the naked man was undertaking his daily exercise routine. On one occasion, with his back to Jorja, exposing his domed wobbly buttocks, he bent from the waist, to the left, to the right, to the left, and to the right. Another time, as he faced the window, his arms were outstretched as he undertook twenty squats. Rise and crouch, rise and crouch, and rise and crouch. This action led into a swifter crouch and a forceful rise while extending his arms outward as if pushing away a boulder: crouch and push, crouch and push, and crouch and push. As his pale knees jutted forward, his alabaster posterior stuck outward. Sometimes his action was more of a footsweep: standing firm with legs apart and bringing one leg across the other: footsweep left, footsweep right, and footsweep left. Always naked in the coldest of winter, he was always focused, as if in a trance. Almost as large as a sumo wrestler, Jorja named him Bruce.
Brik and Bruce were similar in many ways. They were both the largest of their species. They were both epitomes of concentration, meditation, and utter absorption in their inner being. They both appeared to demonstrate a gentle exterior with an underlying, secret ability to unexpectedly explode with the brute force of a champion conqueror. For this reason, they both compelled Jorja to voyeurism. They differed only in their movements and outer covering. Brik never seemed to move at all: stoic, still, calm, and inert. Bruce, on the other hand, was in constant motion: deliberate, concentrated, defined, and regimented. Brik was all hair and hound, whereas Bruce was as naked as the day he was born.

Jorja’s first meeting with her boss, Dr. Khorgolkhuu Noyonbaatar, head of the nutrition department, sent her team in a flurry. “He’s tough and demanding,” Oyugun advised. “Everything has to be perfect.”
“I think Mrs. A. Rongu is tougher,” said Jorja. “She’s a dragon lady.”
“She is bossy, that’s true, but Noyon is really, really, threatening,” said Solongo. “You can speak your mind, but he is the one who makes the decisions. Just don’t make him angry.”
Oyugun had a pack of cards in her hand. “I think we need a message card today because you need to know what the day will bring to you, Jorja.” She shuffled the pack and placed a card face up on her desk. Jorja moved closer to Oyugun as she stood over the card. “I have drawn the falcon. It is a good card if you obey its message.”
“You must pay attention Jorja,” said Temulbaatar. “It is a message for you and Oy’s card is always right. Oy, you can read it now.”
While she read the card’s message she rubbed moisturizer into her hands. “The falcon says providence is on your side. The opportunity presented to you is congruent with your soul’s purpose. Even if you don’t feel fully prepared or have doubts in your ability to manage the complexities of this venture, you’ll be pleasantly surprised by the support that will come to you in unexpected ways. Stay focused on the goal. Commit one hundred percent of your being to the task. This isn’t the time for over-analysis, introspection, or retreat, but a time for action. Be willing to adjust your course of action as the need dictates.”
Everyone silently looked at each other. Batuldzii finally said, “It is a truthful message. Come on, we can’t be late.”

In the winter of 2010, Australian health expert Jorja Himmermann arrives in Ulaanbaatar to work with the Mongolian Ministry of Health providing grants to clinics and hospitals. Her new job is relentless, and the reputation of her boss is formidable. Her Mongolian colleagues include three efficient women, a diligent government team, and Mr. Irresponsible.

In the longest, bleakest winter on record, a flu epidemic strikes. Hospitals are overcrowded, vaccine supplies are depleted, and healthcare workers are pushed to their limits. Crops, cattle, children, and the elderly are dying.

Amid accusations of sabotage, corruption, and misappropriation, Jorja finds peace from her apartment window, watching Brik the unmoving mastiff and Bruce the graceful wrestler. Jorja finds advice in the prophecies of message cards and ancient Mongolian proverbs.

Then the unthinkable happens, and the shortness of life affects them all.

Based on true events, this novel offers a portrait of strength, solidarity, and resilience in the face of a devastating Mongolian winter.

Martina Nicolls writes from her own experiences as an independent aid worker in developing countries, primarily in postconflict countries and those with transitional or emerging governments, but also countries requesting technical assistance. She was in Mongolia for the winter of 2010.