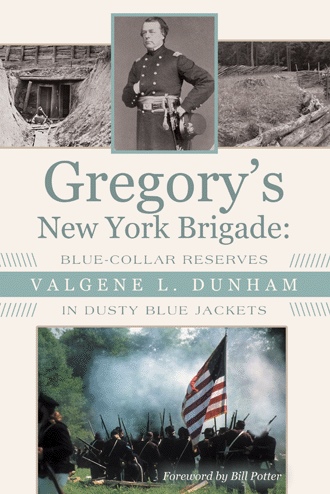 As a fighting unit, the regiment has attracted the attention of most historians in recording the battles of the Civil War. In numerous books and articles, historians have shown the integration of individual soldiers into companies that have brought fame to the regiment. Less often, however, has the larger battle unit, the brigade, been the focus of historians, hence the public. Usually led by brigadier generals, the brigade has played important roles in the strategy of commanding officers such as Grant and Lee and their ability to place a sizeable fighting force in a given location and to identify that force in the heat of battle.
Confederate brigades were often initially organized with regiments from one state. The famous Granbury’s Brigade was composed of eight regiments from eastern Texas that came together after a few major battles including Vicksburg and Chickamauga. As a former resident of Kentucky, I must give recognition to the 1st Kentucky Brigade. Before the end of the war they were called the Orphan Brigade, “a title of nobility” as described by their first historian, Ed P. Thompson. The brigade was made up of five Kentucky regiments and a battery of artillery. When they left Kentucky to fight, they numbered nearly 4,000. At the end of the war, the Orphans mustered only 600. Just as Granbury’s Brigade gained fame from the battles they fought, the Orphan Brigade fought at Shiloh, Vicksburg, Murfreesboro, Chickamauga and every engagement of the Atlanta campaign.1
Organization of the brigade in the Union armies, on the other hand, was often based on a collection of regiments from different states and named for their ethnicity or reputation in battle. The Irish Brigade was composed of Irish Catholics in three regiments from New York, one regiment from Massachusetts, and one from Pennsylvania. Fighting heroically at Gettysburg, the Irish Brigade came with 530 soldiers and left with 200. Another brigade at Gettysburg that gained fame in battle was the Iron Brigade, composed of three regiments from Wisconsin, one from Indiana, and one from Michigan that joined after the initial organization. Known for their fighting tenacity, they were also called the Black Hats because of the Hardee felt hats they wore instead of the usual blue Kepis hats.2
There were Union brigades that were composed of regiments from just one state. The Vermont Brigade was composed of five infantry regiments and one heavy artillery unit, all from Vermont. This brigade had the greatest loss of life for one brigade in the entire Civil War with 1,172 killed or wounded, a loss of 58 per cent. Once again, the brigade was distinguished for its battles, in this case, the Wilderness and Spotsylvania.3
As soldiers fought and died in these famous brigades in major battles of the war, the call for replacements was broadcasted, especially in the summer of 1864, when the war was not going well for the Union and dragged on interminably in the opinion of many citizens of the United States.
This book focuses on a reserve brigade from one state, made up of three regiments from western and central New York that did not fight in what is considered a major battle in the war. The brigade was commanded by a brevetted brigadier general of combat experience but he is not recognized as one of the great Union brigadier generals. They were led by Brigadier-General Edgar Gregory, a general of principle and faith, who took and carried out orders well, recognized the brigade’s role, and changed the trench-digging farmers and lumbermen into a fighting unit.
There were many complaints about new reserve recruits because they were almost untrained and certainly untried. In fact, there were members of this brigade that loaded their muskets for the first time just before lining up in their first battle. The major activity in their first weeks in Virginia was digging.

Gregory’s Brigade of New Yorkers was composed of three regiments: the 187th, 188th, and 189th New York State Volunteer Infantry Regiments. These soldiers arrived in City Point, Virginia in the first two weeks of October, 1864, and in the following two weeks spent their time constructing breastworks and repairing battle-damaged fortifications. They were “blue-collared workers” in dusty blue jackets who fought in their first engagement at the 1st Battle of Hatcher’s Run on October 27, 1864.
Why write a book about such a brigade? My family’s ancestors lived in Allegany, Cattaraugus County, in western New York. My great-great-grandfather was a member of Company A, 188th New York, and was killed in the 2nd Battle of Hatcher’s Run.4 My research has led to an increasing interest in how the brigade was employed as a dependable reserve unit by Generals Warren, Griffin, Chamberlain, and Gregory. The brigade’s evolution into a fighting unit during the dramatic chase of General Robert E. Lee’s Army of Northern Virginia across the state culminated in its greatest battle at Five Forks. After racing toward Appomattox, under the command of Generals Griffin (V Corps), Chamberlain (1st Division), and Gregory, the brigade returned to “blue collar” work when they were chosen to receive the surrendering Confederate troops and collecting all of their weapons of war. On the march back to Washington, D. C., they were assigned to guard the railroad after President Lincoln’s assassination and were part of the “military government” in Virginia up to the time of their participation in the Grand Review in Washington, D.C., on May 23, 1865.
In my attempt to tell the brigade’s story, I have combined background information about the war with personal accounts of soldiers who served in the brigade.
As our country continues to struggle with war and the seemingly constant threat of war, I am reminded of words by Orin Hatch about American military cemeteries:
“Where the marble gardens grow hallowed memories ever live,
Monuments to sacred souls who gave all that they could give.
May the green fields planted here keep the memory ever near;
That there might not be one more row
Where the marble gardens grow.”
Orin Hatch, 2000
Valgene L. Dunham
Conway, South Carolina
January, 2015.

At the beginning of October 1864, the only equipment most Union soldiers near Petersburg, Virginia, needed was a shovel--including Gen. Edgar Gregory’s new reserve brigade, which was digging trenches around the besieged city.

Most of the brigade’s volunteer members from New York had never fired a musket upon marching into the swamps and woods southwest of Petersburg. But the dusty blue-collar workers became a force to be reckoned with as they dug and marched westward to force Gen. Robert E. Lee to extend forces away from Petersburg.

Following the brigade’s largest battle, Five Forks, the Union marched rapidly westward to keep Lee from joining Gen. Joseph Johnston. The brigade was selected to assist in the surrender at Appomattox.

Those acts alone would have solidified the brigade’s place in history, but its men also served as caretakers of the peace during their march back to Washington, D.C.--especially after the assassination of President Lincoln.

Gregory’s New York Brigade deserves to be honored as much as those who fought in the major battles of the war. Find out why in this detailed account of its well deserved place in history.

Valgene L. Dunham earned degrees at Houghton College and Syracuse University before pursuing a career in plant biochemistry with research/teaching positions at Purdue University, State University of New York at Fredonia, and Western Kentucky University. He was the dean of science and associate vice president for research at Coastal Carolina University, where he’s now a distinguished professor emeritus.