Confessions of a Hospital Spin Doctor 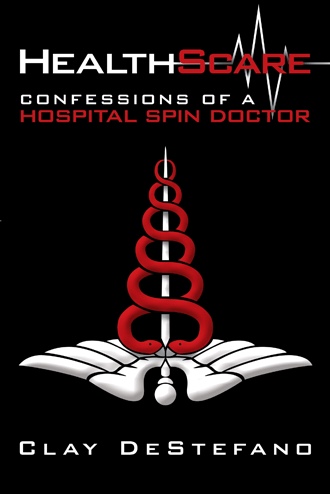 The Great and Powerful Oz

My wife, like my father and many other Americans, is a healthcare junkie. She believes in doctors, pills, shots, implements -- even surgical intervention -- for everything. It’s been a running debate between us for our entire 30-plus-year marriage.

Two winters ago she began experiencing strange pain in her stomach followed by vomiting and diarrhea. The flu like symptoms continued off and on for a few weeks.

By spring, they were back and worse. This time whenever she changed position – from lying flat to sitting up, standing from sitting or going up or down stairs – she’d be hit with excruciating pain, followed by vomiting and diarrhea.

Despite my hesitation, she insisted that I go out of town to attend a corporate training seminar.

While I was away her condition worsened and a friend took her to the emergency room of the hospital where I worked as the director of public relations and marketing. She was treated for pain, given fluids and run through some additional tests. Her case was a bit of a mystery because she was displaying a variety of symptoms but no definitive diagnosis could be given. She was discharged and referred to a gastroenterologist for follow-up.

When she couldn’t get in to see any of the specialists on our medical staff quickly enough, she and her friend decided to go to the hospital in the next town. By the time I returned from my trip my wife was scheduled for a study to check out her gallbladder function. She underwent the test and it showed that her gallbladder wasn’t functioning properly.

After reviewing the test results, the gastroenterologist informed me that her gallbladder needed to come out and he could fit her into his surgical schedule the next day in Austin. My wife immediately said she wanted it taken out. I explained that I was employed by a different hospital and asked if he could perform the procedure there. He told me he didn’t practice there, didn’t know anyone who did and promptly hung up on me.

Apparently, once he realized he wasn’t going to make any more money off of us, he was done. No referral, no hand-off, just a click on the other end of the phone.

I called one of the surgeons on our medical staff that I admired and trusted – no small feat in itself – and asked if he would be willing to give us a second opinion. He graciously agreed to see us that same afternoon. He asked several questions, reviewed her records and the same study the gastroenterologist had. He told us that, even though her gallbladder function wasn’t normal, she didn’t have any of the other classic symptoms to suggest it needed to come out.

Amazingly enough, this surgeon was not recommending surgery.

When I explained that the condition had been going on for nearly 30 days non-stop and my wife had lost almost 30 pounds in as many, he made a phone call to one of the gastroenterologist on our medical staff who also graciously agreed to see us that same day.

While this gastroenterologist also could find no immediate medical reason for the symptoms it was clear that her health was precarious so he admitted her for “failure to thrive.”

A few hours later she was in a bed in our hospital scheduled for more intensive testing. In addition, she was on IV fluids, pain control and a liquid diet. The immediacy of the attention certainly made her feel better emotionally and the IV and pain meds temporarily masked her physical symptoms.

After a few days, the best diagnosis seemed to be “Vasculitis NOS” (not otherwise specified). She was discharged and referred to a rheumatologist for further testing and treatment.

We were told that Vasculitis was an inflammatory disease that comes in different forms. In her case it seemed to be inflaming the veins and arteries that fed her digestive system.

The rheumatologist’s treatment consisted of a combination of steroids and other anti-inflammatory drugs. The steroids worked remarkably well; however, due to numerous side-effects, it was not recommended that she stay on them for an extended period of time. For a while she responded to the cycled up, down and eventually off steroid treatment.

Then we moved on to the big guns – a chemotherapy drug that has had good results with long term anti-inflammatory treatment.

Despite my hesitancy, my wife was game.

To me, it was hard to tell which was making her sicker -- her condition or the stated side effects of the drugs she was on. I wanted her to get off, but she had read and been told that the treatment could take three or more months before you would see any improvement.

Soon we were on to a pain medicine specialist who initially prescribed immediate release morphine. When those were no longer effective he transitioned her to extended release morphine and was about to write a prescription for a wheelchair because she was too week and doped up to walk.

That’s when I threw in the flag.

Winter was nearly upon us again and in less than a year’s time she’d gone from seemingly healthy to almost having unnecessary gallbladder surgery, regularly ingesting a chemotherapy drug along with round the clock morphine and now she was about to succumb to a wheelchair. All of this so called progress occurred while under the care of medical specialists.

By then we’d already spent thousands of dollars, invested nearly a year of our lives and, from my perspective, things were worse than when we started.

My wife and I were emotionally and physically exhausted and desperate to find a better solution. I asked for a referral to Mayo Clinic. The rheumatologist was now serving as my wife’s primary care provider and agreed Mayo was a good idea. He helped arrange the appointment and within a few weeks we were on our way.

We arrived late in the day on a Wednesday in early December -- just in time to do a little reconnaissance on the campus so we’d know where to be for our first set of appointments that began at 7:30 the next morning.

Despite the inhospitable weather we could not have felt more welcome or safe. We picked up a wheelchair in our hotel lobby. The chair would stay with us the entire trip and be my wife’s salvation. It would be mine as well. The chair made it possible for her to be mobile without triggering an attack.

As snow fell and the Christmas lights of Mayo twinkled from across the street we settled into our room for the night.

The Mayo campus, in fact the whole community of Rochester, was warm and friendly. From the Clinic’s physicians and support staff to the shop clerks, waitresses and even locals on the street, all seemed incredibly-oriented towards the patients of Mayo and loved ones accompanying them.

A series of pedestrian skyways and subways connect the Clinic buildings with hotels, restaurants and shopping malls so you never have to go outside if you choose not to.

The assorted buildings that make up the Mayo Clinic campus itself are filled with world class artwork. You hear concert-quality music coming from a grand piano in the main lobby. And despite its vastness and the thousands of people walking through the common halls and accessing care along with you, the beautiful architecture, healing light and meditative spaces help to calm and reassure you that you’re in the right place for whatever it is that ails you.

Everyone seems to be focused only on you.

Clay DeStefano has spent thirty years working in a health care industry, and he’s come to an unexpected conclusion: Medical care should be sought only as a last resort and even then, with extreme caution.

Unfortunately, Americans today seem addicted to health care and all its spinoff industries, and like our other addictions, it’s killing us.

It almost killed the author’s wife: When she became sick, doctors nearly unnecessarily removed her gall bladder before putting her on an assortment of drugs with never-ending side effects. When she stopped taking all the prescriptions, she finally started to get better.

As a “spin doctor” specializing in hospital public relations, the author takes a critical look at the health care system, tackling everything from the Affordable Care Act to Ebola. In the process, he exposes a bloated system that’s often ill-prepared and ill-equipped to solve big problems.

Despite the hype and political talking pints, hundreds of thousands of people continue to needlessly die at the hands of their health care providers each year. Find out how to avoid being a statistic with the insights in HealthScare.

Clay DeStefano is a writer, artist and change agent. Over three decades he helped build goodwill and the bottom line for three of the nation’s largest health care corporations. He and his wife live in San Marcos, Texas.