A Story for Animal Lovers of All Ages 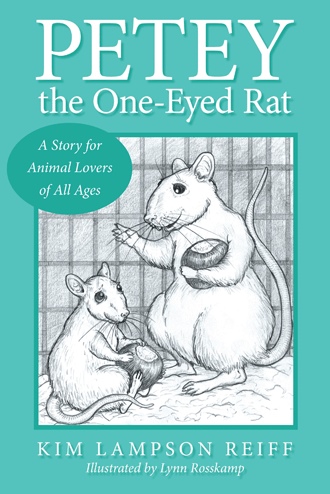 The day I learned about death row began like every other day in the rodent pavilion at CarPet World. The familiar sound of raindrops falling on the metal roof of the store served as background music to the daily activities.

Red shirted employees arrived early to prepare the store for opening. Greetings, jokes, and pleasantries were shared, and then the routine tasks of organizing papers, polishing cars, and feeding animals began.

However, that day something special was going on in the auto department. Car salespeople were peppering the showroom with red, white and blue balloons that hovered above the cars just like sea gulls, buoyed by wind currents, float above the ocean. I watched with interest, my attention riveted by the bobbing motion of the colorful orbs.

Just after the last balloon was blown up and hung, Jag and Cat came in and walked over toward us, already engaged in an animated discussion about ways to rearrange the rodent pavilion. Joe and Fred breezed by with a new delivery of guinea pigs.

Cat served us our breakfast as always. We spent the day dozing, now and then rousing enough to observe any new or interesting occurrence at the store. Hoover, Templeton, and I shared a space in one corner of our bin and diagonally across from us, ER 002, Sketch, and X-Con slept in the opposite corner. The blue plastic sleeping dome in the center of the bin stood empty. We all came together at feeding time, but the remainder of the day, hung out in two groups. It was mid-afternoon and I was sleeping, dreaming about a delicious meal of Swiss cheese, tuna fish, and yogurt drops when the sound of a loud, angry voice woke me. There was a young man with a wild look in his eyes yelling at Cat, demanding to speak with the manager.

Alerted by the man’s angry tone of voice, Jag strode toward him, standing protectively between Cat and the disgruntled customer.

“Excuse me, sir, direct your words toward me. I am the manager,” commanded Mr. Jaguar, his authoritative voice like that of a general leading his troops in battle.

Jag extended his hand in a friendly greeting, then asked, “How can I help you, sir?”

The man did not extend his hand. He held up a box instead. “Here. Take this rat. I don’t want to ever see him again,” he said with some difficulty since he was panting like an exhausted marathon runner.

As quickly as if he were passing off a hot potato, the man thrust a shoebox with small air holes poked in the top into Mr. Jaguar’s still outstretched hand.

Then, the man yelled, “I bought him yesterday as a feeder for my sweet baby, Jimmy, and he almost killed him.”

Jag stood motionless, the box in his hands. The man paused for a moment, his voice cracking with emotion, pulled out a tissue from his back pocket with a hand covered in bandages, dabbed his eyes, then went on.

“If you know what’s good for you, don’t try to sell him as a feeder a second time!” The man paused again, pulled out another tissue from his pocket, then wiped his eyes and blew his nose.

The man was crying. Jag opened his mouth to say something, but before he could, the man had pulled himself together enough to go on with his tirade.

“Don’t bother with a refund. I don’t want to ever touch anything that is from CarPet World again, not even money! I will never set foot in this store for the rest of my life and will make sure that none of my friends do either!” He wiped his hands against each other as best as he could given the bandages on the one. It was as though he were trying to scrape off some undesirable sticky substance.

When he finished, he turned abruptly and stormed out of the store. Jag stared after him, dumbfounded, still holding the small box in his hands.

As this drama unfolded, the rats in my bin migrated to the right wall of our container to have a better view of what was happening. Six pairs of small, round eyes watched the man leave, having no clue what he was talking about. Then, lining up against the glass as though watching a parade, we turned our gaze back to Jag and watched expectantly as he slowly lifted the lid off the box and peeked inside.

He broke into a big smile, the little crinkly lines at the corner of his eyes fanning out in a way that enhanced his expression, and said. “Hey, FR 89, you’re back!”

We stared in disbelief, feeling confused by this highly unusual turn of events. Once rats left CarPet World, they simply did not come back.

I turned to Hoover and whispered, “What did he mean by ‘a feeder”?”

That night, we learned the shocking truth from the “returned rat”.

It turns out that FR 89 was a huge, all white, young male rat with pink eyes; he looked like a stereotypical lab rat. Apparently, Jag took the man’s advice, because he did not put him back into the feeder bins. Instead, he rather unceremoniously introduced him to the rats in my bin.

“Here’s a new buddy for you guys,” Jag explained, then spoke directly to the white rat in his hands. “Guess we have to give you a new name. How about ER 89? I know it’s not much of a change, but it works for me.”

He lowered ER 89 gently onto the shredded aspen bedding on the floor of our bin, muttering to himself, “I have to remember to make a note of that.”

Jag closed the lid to the bin and walked away, shaking his head and chuckling as he murmured something that sounded like, “Snakes 0; Rats 1.”

Next thing we knew, ER 89 was milling around with us, exchanging sniffs in silence, the way that rats do when meeting and greeting each

other. The pounding of the rain on the roof grew louder; a storm was upon us.

ER 002 was the first to speak. “Hey, Pillsbury Dough Boy, have you been rolling around in a sugar bin?” he sneered, poking fun at ER 89’s white fur.

Sketch and X-Con joined in the laughter, obviously admiring the wit of their leader.

Our new binmate, unabashed by ER 002’s attempt to insult him, retorted, “Yeah, man. Made me pretty sweet. Just call me Sugar! That’s what they called me in the feeders.”

The name stuck and from that moment on, we did exactly that. I invited Sugar to join Hoover, Templeton, and me in our nest since we were drowsy and ready to go back to sleep. The remainder of the day passed uneventfully with the rhythmic sound of the raindrops making sleep come easily.

It was a few hours later that Cat fed us our dinner followed by a special treat of cantaloupe squares. All the rats in my bin clustered themselves around the food dish, thoroughly enjoying this delicacy, their heads facing the dish with tails pointed outward like spokes on a wheel.

Pausing with half of the tasty orange morsel held gingerly in his paws, Hoover asked Sugar to tell us his story, “Hey, dude, what happened? You didn’t cut it as a pet rat?” asked my buddy, between bites of cantaloupe.

“No, man, that’s not it at all! Pet rat? Are you kidding? Don’t you know what happens if you are in the feeder bins?” Sugar stared at Hoover in disbelief, his black eyes wide; his voice that was usually so strong and confident was suddenly shaky.

I noticed that he was trembling; something so uncharacteristic of male rats that we drew closer to him as if pulled by a giant magnet. We instinctively knew that what he had to say was very important.

“No,” I whispered, not quite sure why I had lowered my voice. “Tell us.”

When Petey is born, he is a normal, healthy rat with two round, dark ruby eyes. Life is good, and he is happy. Then, things begin to change and his eyes are opened to a different side of life.

Petey and his siblings find themselves at a pet store waiting patiently for someone to adopt them. But one day, a huge fight breaks out in the rat bin, and Petey is severely injured. He’s worried about what’s going to happen to him; he certainly does not want to end up as a feeder rat. Then, through a strange twist of fate, Petey finds a new home with a loving family. It’s an adoption that changes all of their lives.

Based on true events,

is a tale of love, loyalty, despair, faith, and courage. It is a story of serendipity—the amazing way that paths cross unexpectedly to create powerful, unlikely connections such as the one between Kim, the psychologist, and Petey, the one-eyed rat.

Lynn Rosskamp is an animal lover, artist, cartoonist, and graphic designer. The owner of the rattery, Rodents of Unusual Sweetness, Rosskamp is the coordinator of Ratapalooza, Seattle’s rat show and pet rat expo. She resides with her husband, a whole lot of rats, and several cats.