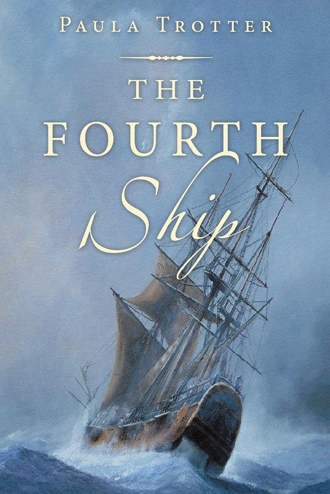 John's eyes fluttered open to the sound of commotion coming from the bow of the ship. He shot up and noticed small, flickering bonfires dotting the French coastline. He raced toward the bedlam and joined the row of deckhands pointing and shouting toward the sea. The faint awakening of dawn stripped decency from the darkness and exposed shame in all its glory.
John marveled at a seascape of debris floating atop the ocean waters. Large planks, shrouds of sail, and several shredded sections of timber drifted past. But when four grotesquely bloated bodies floated by, he gasped.
Ali came rushing over, his face contorted in horror. Charred body parts bobbed up and down on the sea below. Hideous sores, blackened blisters, and decaying flesh riddled what was left of the corpses. Gulls circled and squawked.
A faint cry caught John's attention.
He ran back to the stern. Ali followed close behind. They leaned over the railing listening intently. Something was there. Where? Then John saw the sea froth and heard a loud gasp as a young man hoisted himself from the water. Ali shouted and pointed.
"There he is."
The youth who had survived the blast from the night before clung desperately to a thick rope on a large wooden plank. His skin was as dark as the helmsman's, but the left side of his face was bright pink, burned. One ear was caked with blood and all but hanging from his head. John and Ali heard a weak moan.
John called out frantically.
"Captain. A survivor."
He grabbed the braided rope that Ali had been working on and tossed it toward the boy, but he missed by too great a distance. He gathered up the rope and was about to toss it out again, when he felt a resistance. He spun around and faced Millhouse, who whipped the rope out of John's hands.
"Leave him."
"But, Captain, he'll die."
"He's already dead, he just don't know it. This is some kind of outbreak, and he's part of it. Look at his face."
"He's been burned, not stricken," John pleaded. "You can't leave him."
"And you are...what? A physician? A man of science?" the captain sneered. "How do you know he isn't a carrier? He could be a deliverer of death." He turned away from the rail. "Besides he's a darkie. Leave him to his fate."
The young sailor's eyelids began to droop, but he did not take his gaze off John. His weakened body quivered and he stretched out his arm, his fingers reaching toward his would-be savior.
John shouted. "Avast. Avast. He will not die as long as I'm on this ship."
Millhouse grabbed John by the arms and shook him mightily.
"Do not bark orders as if you command this vessel, or I will punish you as I would a mutineer. Have I made myself clear?"
Ashen, John nodded. The captain bellowed, "Lower the skiff."
As a pair of deckhands began to unravel the ropes, John's color reappeared. Millhouse growled at him, "Well, don’t just stand there, gather your ditty bag go and save your darkie"
John was unsettled as he watched the crew prepare the skiff. Fear overcame Ali. What if John expected him to help? Or worse, go with him. Ali cringed and slowly backed away. John stared at Millhouse, who spoke loud enough for the entire crew to hear.
"You are right, Mr. Smyth. He will not die with you on this ship. He will die with you on your skiff. You commodore it. Head west, you can't be more than twenty nautical miles to England. You brag of seamanship. Sail back to England. By the time you reach shore, he'll be dead, and you'll be a carrier. Start an epidemic, you fool."
Millhouse shoved John toward the skiff. "What's the matter boy? You resisting? You don't want to share a vessel with a plague victim? Ah, you ain't so convinced he's clean now, are ya?"
John yanked himself free of the captain's grasp.
"That's not it at all,"he said, but his mouth had gone dry. He tried to swallow. He dared not look back at the boy flailing helplessly in the water.
The captain screamed in John's face, "Are ya going to save his life or not? Your last chance, boy."
John stood motionless, incapable of making such a decision. All of his being compelled him to aid the young sailor helplessly floating on the frothing sea. But what if Millhouse was right? What if the boy had the plague?
The captain yelled at the deckhands. "Heave the skiff up and secure."
He addressed John with disdain, "Not so sure of yourself, are ya, when it comes to saving your own neck. He's a diseased sub-human. Now walk away. You've not got the stomach to witness this. He will be taken out of his misery."
Rake approached the rail with a musket. He flipped the flint hammer back and John realized what was coming. A sickening feeling came over him. He looked around in panic for help. The crewmen who had gathered to watch remained silent. Ali had disappeared.
The helmsman quietly had returned to the wheel. John's voice cracked as he confronted the captain.
"Your orders are an execution?"
The captain spoke calmly. "On the contrary, my orders are his salvation, to save him from drowning. Unlike your cowardly refusal to go to his aid. His death is on you. You had a choice, and you choose to forsake him."
John's vision blurred. He looked desperately back at the sailor who had hoisted himself on the plank and balanced there precariously. The boy waved feebly. The musket fired.

John Smyth, accustomed to a life of privilege and ease in eighteenth-century England, drops out of school to take charge of his family’s shipyard, leasing out its beloved schooner, “My Glorious C” for quick profit, when his father dies.

The young heir also finds himself drawn to Lady Sideris Douglas, who is betrothed to Aldin “Ali” Langford, son of the baron who arranged the lease of Glorious. Against the objection of his closest adviser, he and Ali join the ship’s crew on what is supposed to be a routine channel crossing to France.

John soon faces agonizing consequences from his misguided decisions. The schooner disappears, the trustees are arrested for fraud, and his shipyard is seized, soon to be auctioned. Even worse, Ali realizes what’s going on between John and Sideris.

Driven to correct his wrongs, John embarks on The Fourth Ship--the same ship whose mast crushed his father to death and that he vowed never to set foot upon.

“With its intriguing plot, competent prose and engaging characters, there’s much to recommend this story. It builds enough suspense to keep readers glued to the pages…”
-Kirkus Reviews

Paula Trotter is a recipient of the Writer’s Guild East screenwriting fellowship. She received recognition from the motion picture industry for several of her feature film screenplays and treatments. She was awarded honorable mention by the American Song Festival, Lyric Competition IV.

Paula is a former U.S. Marine Corps sergeant and retired U.S. Air Force master sergeant. She is married and resides in her beloved Vermont.