Is Lenny a Loser? 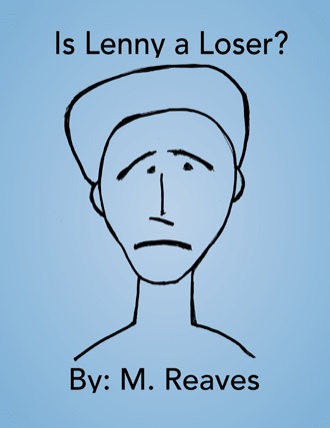 Lenny didn’t get excited about recess. He wasn’t the greatest athlete nor was he worst. He was neither the fastest nor the slowest. He hated team sports because Lenny was one of the last to be picked. When the boys played football it was suppose to be fun. “Lenny just stand there and don’t move” they would say. They never gave him the ball and he never received a pass from the quarterback. When the class played basketball poor Lenny had to run around the court in circles. He never got a chance to score because no one would pass him the ball. It was the same with soccer and kickball. Lenny enjoyed freeze tag because he could at least catch the slow kids. On the other hand he got teased by the faster kids because he couldn’t catch them and he always got tagged. It was here that he got the name Lenny the Loser. “Lenny the Loser you can’t catch me” teased Fast Freddie. The other kids chimed in “Lenny the Loser”.

Lenny the loser, the moniker became like piece of gum stuck to the bottom of his shoe. No matter what Lenny did he could not shake it. If he slipped and fell to the floor and it was because he was Lenny the Loser. Never mind there was wet spot on the floor and three people had fallen before. Lenny felt so misunderstood. Lenny knew things at all time low when he placed in a kindergarten class when his teacher was absent. He usually loved this experience because helped the little ones with their art projects and he passed out the snacks. The kindergarteners would give him hugs. Now, Fast Freddie little brother Aaron was in the kindergarten class that Lenny had been placed into and he remembered Lenny. The first words that Aaron said to Lenny was “ Hi Lenny the Loser and the rest of the class just joined in “Lenny the Loser” Lenny the Loser”. Lenny was hurt but he didn’t let anyone know how he felt.

Lenny Kalou is a third grader who fears he is not good at anything. Always the last to be chosen for team sports, Lenny eventually obtains an awful nickname: Lenny the loser. Unfortunately, just like a piece of gum stuck to the bottom of his shoe, Lenny cannot shed his loser image—until he decides to attend a Boys and Girls Club fair.

As the aroma of popcorn and sugar fills the air, Lenny becomes focused on a large jar full of pennies. All he has to do is guess the correct number of pennies in the jar and he will win all of the coins plus a special prize! After he trusts his feelings and makes his guess, all Lenny can do is wait. Filled with doubt, Lenny covers his ears as the winner is announced. A split second later, Lenny’s life is transformed along with his nickname. As he learns a valuable lesson, Lenny discovers who he really is deep inside.

In this poignant juvenile novel, a third grader with a dreadful nickname must learn to love and believe in himself in order to find the happiness he deserves.

M. Reaves holds an associate’s degree in advertising, a bachelor’s degree in vocational technical education, and a master’s degree. After a twenty-five-year stint as a special education teacher in the New York City school system, he now works with people with disabilities at the Young Adult Institute. Reaves lives in New York with his family.