Squeak and the Capital H 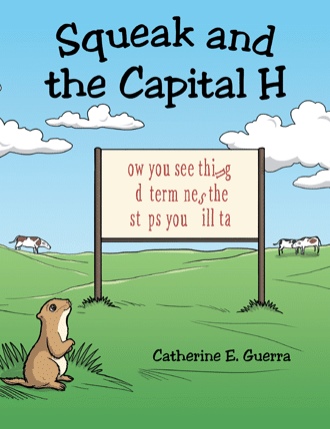 Squeak and his friends lived in a prairie dog village at the edge of town beneath a large billboard on a large empty piece of land. The village relied on the billboard to provide shade during the hot summer months.

Squeak, Chippy and Cheeks, his twin chipmunk friends, and Bunny liked to play beneath the billboard. Here they would run laps around the two poles; they called the two billboard poles trunks because they looked more like trees, from the ground, which held up the sign over head.

Many times they would find objects that people had dropped or threw on the side of the road. On this day, Squeak ran up to their race track (as they like to call it) around the trunks, after breakfast, to find an interesting object leaning up against one of the poles. Bunny, Chippy, and Cheeks were in awe of what it could be.

The object had two bars that were a little taller than Bunny. The two bars were connected by a shorter bar across the middle. The four were excited to have found the object and shared ideas about what this object could be; and more importantly, what it would be used for in their community.

Maybe it could be used to reach things high up. Squeak demonstrated by leaning the object against an old tire, now being used as a wall around Mr. Micah’s hole, standing on the middle bar reaching high above his head.

Each demonstrated with the object their idea as they walked along taking the object back to their village to show what they had found. Each was equally sure the idea they shared was an excellent use for the community but they also agreed that the other’s ideas were very good as well.

Squeak, Chippy, Cheeks, and Bunny love to play beneath a large billboard on a large piece of empty land outside their prairie dog village. One day when Squeak finds a mysterious object that has fallen from the billboard, the four animal friends become curious about what it might be.

With help from a wise old prairie dog, the four learn all about the object and its purpose in their community. As Squeak, Chippy, Cheeks, and Bunny discover how to see things differently and that it is okay if not everyone thinks the same as them, they also learn about the Great Creator and how much He loves them.

In this charming children’s tale, the reader takes an educational journey within the meaning of perspective and learns to see things from other’s point of view.

Catherine E. Guerra holds a master’s degree in Severe Affective Needs and has spent over twenty years helping families and children. In her writing, she shares insightful lessons and biblical concepts she hopes will assist families in discussing life choices that impact their relationships and interactions. Catherine lives in Dacono, Colorado.