Rocket and James Are Locked In! 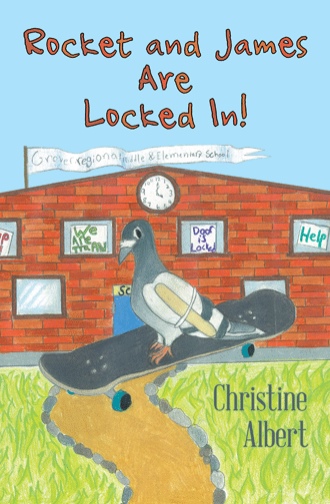 After breakfast, we went to feed Max. “Maximillion ol boy!” I declared upon entering the science lab. I could feel James roll her eyes behind me. “Hey! Check it out!” Max had been pecking away at the wing splint we had made. “He wants it off.” “Should we take it off?” “I think it should stay on at least another day.” I put the food in front of him hoping it would stop him from the pecking. It didnʼt. “Max! Come on, cut it out!” I slid my hand around and under his belly and lifted him up, he didnʼt like it. He started waving his wing around and thrashing in my hand. I put him on the lab table, he stopped thrashing but I could tell he was stressed. “Maybe we should take it off.” James suggested. “Na, I know what Iʼm doing. One more day.” James bent over close to examine the bird. He examined her back. She reached her hand out slowly and began stroking the birds head. He seemed to enjoy it. I stuck out my hand to do the same and he came at me with his beak open, ready to strike. “What the heck?” James was bent over whispering to Max and scratching his head. “Itʼs OK, youʼre gonna be OK, give it another day and weʼll take it off, OK? Whatʼs that you say?” she leaned her ear in “You want me to tell the boy what?” James is such a goofball. She stood and looked at me funny. “What?” “Sheʼs ticked off.” “Whoʼs ticked off?” What the heck was she talking about? “Sheʼs ticked off.” She jutted her chin toward Max. “She wanted me to tell you, she thinks youʼre an idiot.” “Why? What did I do?” I couldnʼt believe I was having this conversation as if the bird was really speaking! I swear, James made me crazy.

“Sheʼs a girl, Rocket. A G-I-R-L. A girl. Sheʼs a girl bird and youʼve been calling her Max. Sheʼs not happy.” James had her hands on her hips and her foot was tapping on the floor. “Are you crazy? You are, you know. There is no way on this earth that you can tell that that bird is not a boy bird.”

“Iʼm calling her Sara. Sara, with no ʻhʼ. Sara is her name. Isnʼt that right Sara?” James scratched the birds head and it responded. “What the heck?” I whispered under my breath. I will never understand girls.

David, whose friends call him “Rocket” is in the seventh grade at Grover Regional Middle and Elementary School. It is the last day of classes before April vacation and he and his best friend, a girl named James, are very excited.

Suddenly they find themselves Locked In! the school.

This novel for middle readers is told in alternating narrative by two seventh graders, Rocket and James. Join them for a whole week of adventures and their clumsy attempts to escape.

Christine Albert lives with her family and a multitude of dogs in New Hampshire. She is a doctor (but not a real one) and a counselor in private practice.