The Eyes of Midnight

A Time of Terror in East Tennessee

by Robert Wilson & With Richard Way 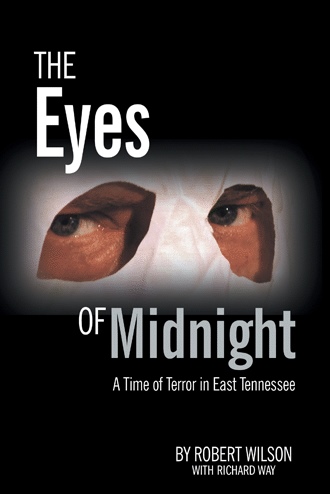 In 1892 the wayward women of Copeland Creek woke one morning to find a bundle of hickory switches -- also called withes -- on their front steps. Attached was a note that advised them to leave the community or face a whipping with the withes. It was signed by the "White Caps." In either defiance or disbelief, the women remained.

But the White Caps weren't joshing and shortly made good on their threat and the women got a thrashing. The White Caps left them with another warning that failure to flee would result in another, even more brutal beating. Having been made believers, the women retreated to Knoxville where their potential customer base was greater, even if the competition for their product was, too. And so it started, demonstrating that the road that leads to the moral high ground sometimes runs through the valley of the shadow of lawlessness.

Without a doubt the Copeland Creek whores were on the south side of the law and imminently short of the glory by community standards. On the other hand, the White Cap response -- irrespective of its moral righteousness -- was assault, plain and simple. And entirely illegal.

The ends having been justified, though, a sense of amused approval spread through the cove, along with a confidence that other questionable behavior might be similarly modified.

And if it had stopped there, the story would be over. But it did not, and what started out as a fairly mild enforcement of Victorian values in an isolated, God-fearing community eventually degenerated into an unabated wave of crime with no moral underpinning whatsoever.

That is how it could come to this. Sheriff Davis knew all that, but still for it to lead to this moment with these people on this wooden platform was almost a stage play. The bell in the 130-foot tower of Sevier County's new courthouse had tolled 1:00. The platform had lost the greater measure of its load. Black hoods covered the faces of the condemned. It was time to hand two sinful souls over to God.

Davis' gaze rose from his boot tops to make eye contact with his deputy standing at the opposite corner with his hand on the trapdoor release.

Davis drew a jagged breath. And he nodded.

But veteran journalist Robert Wilson shines a spotlight on the group with this detailed history. Relying on a primary source--The White Caps: A History of the Organization in Sevier County, distributed in 1899 by the publisher of the City Directory of Knoxville--as well as his own research, he presents the most complete account to date of why the White Caps were so feared.

Wilson has retrieved details from multiple sources and uncovered shocking details about the dark, faceless members who would disguise themselves with a full-body covering of white fabric with holes cut for the eyes.

Though the description may summon images of the Ku Klux Klan, the White Caps focused their wrath on what they perceived as immoral behavior--although some of their activity targeted blacks and Jews, among others.

However, what started out as a fairly mild enforcement of Victorian values in an isolated, God-fearing community became much, much more. Find out how far the group went in The Eyes of Midnight.

Robert Wilson has more than four decades of experience as a journalist, which gave him the wherewithal to take a fresh approach in sharing the story of the White Caps, which terrorized East Tennessee in the 1890s.