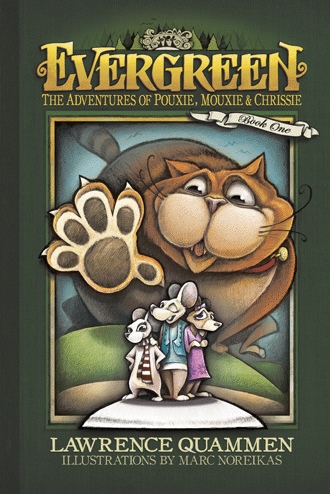 It is one of those fine evenings that come along in a father’s life that you somehow want to keep forever. A wonderful wife, three beautiful daughters, a fine home with plenty of food already stored for the winter, and last but certainly not least, a great place to live with lots of friends. Papa Hopkins is feeling like the king of the pile, not invincible but certainly well blessed, with his whole life in front of him, a life to be shared with family and friends.

After a delightful supper and a little “toot” of the sweetened berry juice that Mama keeps hidden in a secret place for special occasions, Papa decides it is the perfect time for an afternoon walk. Papa shares his plans for a walk with his family after supper. While he finishes the last of his toot of juice, smacks his lips, and pats his tummy, Mama quickly gets her daughters’ attention, rolls her eyes toward the door, and gives a very slight nod. Pouxie, Mouxie, and Chrissie all return a wink and a nod in response, and the plan is set. No sooner is Papa is out of the door than Mama and the girls are up and moving quickly. They wait for a minute or so and then slip quietly out behind him. Papa is spotted in a matter of seconds, and his family settles in undetected, at a respectable distance, for a walk of their own.

Papa decides to walk a bit faster, so he will have time to get back home before dark. As he is zipping merrily down the path, he nears the spot where the path forks. When he is just around the bend from the fork, he stops suddenly because he hears a strange noise. It is a swishing sort of noise that seems to come from in front of him. He creeps forward quietly and listens. Swish, swish goes the noise. Papa continues to creep slowly forward. As he rounds the bend, the mystery is solved. There, sitting directly in front of the left fork, is Sweetpea, with his big face down close to the path, looking directly at him. His ears are laid back, his eyes are narrowed, and he is making a low growling noise while steadily swishing his tail back and forth across the path.

Before the big cat has a chance to move, Papa races past him down the right fork. Sweetpea springs from his crouched position and takes off behind him. Mama and the girls round the corner just in time to see what is happening. Mouxie quickly takes Mama by the paw and heads back down the path toward home. Pouxie and Chrissie scamper off through the underbrush to the right in a wide arc, to get between Papa and the cat. Papa stops to catch his breath while keeping an eye on the path.

Meanwhile, the Crow Brothers are out hunting for supper when they hear the commotion. Circling fifty feet overhead, they watch in fascination as the scene unfolds below them. Things began to happen quickly. The crows hastily devise their own plan, the “assisted flop-over.”

Down below, Pouxie and Chrissie catch up with Papa. Pouxie says, in a calm, reassuring voice, “Come, Papa, let’s go home.”

As he anxiously glances backward down the path, Chrissie chimes in with excitement, “Don’t worry, Papa. I can take care of the kitty.” With that, Pouxie and Papa take a sharp right through the underbrush, and Chrissie waits on the path for Sweetpea to catch sight of her, which happens in seconds. As Sweetpea crests the hill, Chrissie begins running, quickly gaining speed.

Sweetpea is in hot pursuit, dust and gravel flying through the air! Fifty feet up, Festus croaks, “It’s show time!” Sam takes the sentry position and continues to circle while keeping a lookout for any more trouble. Festus and Archie drop into a power dive, rocketing toward the path, happily joining the chase. After leveling off five feet above the path, Archie takes the lead. Dropping quickly within inches of the ground, squinting to see through the dust, Archie uses his large, powerful claws to quickly get a firm grip on Sweetpea’s tail.

He then spreads his broad wings, which drag against the air like a kite on a string, making Sweetpea run even harder to avoid losing speed. With perfect timing, Festus flies forward and gives the cat a sharp peck right between the ears. At the moment Festus pecks, Archie releases Sweetpea’s tail, and both birds fly straight up to meet their brother, who is still circling and keeping watch. With Sweetpea moving at top speed, the combined effect of the peck and release causes the cat to do a complete end-over-end flip before he finally bounces on his big tummy, rolls forward, and smacks his chin. While all this is happening, Chrissie is “going fast.” She is whooping, laughing, hopping, and having the time of her life. She never has a moment of fear, because she knows in her heart that she is the fastest creature around!

After a few minutes, Sweetpea sits up slowly, just in case anything is getting ready to hurt. But no, to his surprise, the only pain is the usual soreness in his chin from the deluxe flop-over he just experienced. What gets his attention more than his sore chin is the silence. No screeching, flapping crows; no hopping, whooping mice. In fact, the only sound is coming from a soft wind blowing through the treetops. Yep, he is feeling better. He stands up and dusts himself off, carefully checking his tail (his pride and joy). Nope, no hair missing. Next he softly rubs his head. Nope, no blood, not even a drop. Yes indeed, he is going to be just fine. The only thing that is not just fine is his pride.

Evergreen is a lively story of 3 sisters, the daughters of Mama and Papa Hopkins, a family of mice. The Hopkins family lives in an old sawdust pile located behind the Hillendale Sawmill and Lumber Company in the small town of Evergreen, Georgia. Evergreen is a little south of north Georgia and a little west of east Georgia. This story follows Pouxie, Mouxie and Chrissie from birth to their early teenage years, times of excitement and adventure. Evergreen is about the magic of childhood, family, love, trust and friendship. The sisters are accompanied in their adventures by a host of great characters and are depicted in a series of excellent illustrations. The principal characters, Pouxie, Mouxie and Chrissie were created by the authors father in the mid – 1950’s for a series of stories for his children. Evergreen is the first book of a trilogy named The Adventures of Pouxie, Mouxie and Chrissie.

Lawrence Quammen spent 23 years in practice as a PA and later joined his wife, Dr. Robecca Quammen in the medical information systems consulting firm she founded. His interest in writing came from a desire to create a fictional work dedicated to his three granddaughters, in honor of his father. Lawrence and Robecca live in Monroe Georgia and Montverde Florida.