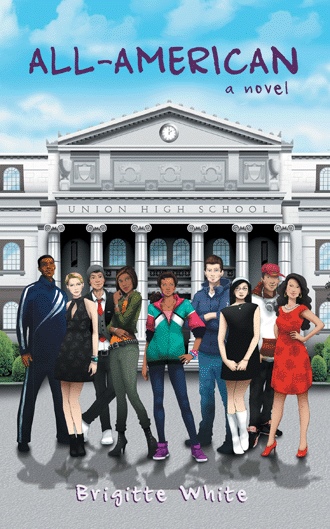 When the first period bell rang, Indigo bolted out of homeroom to get on with the day. Luckily she had American History first period and wouldn’t have to see Emilia again until second period English. Ms. Phillips was actually her favorite teacher, despite her Socratic teaching style, where she randomly called on students to answer questions. She also didn’t mind if her students sat where they pleased, so long as they came to class “ready to think.” Indigo quickly found her seat next to Boris.
“Hey,” she said to the tall hunk who was sifting through his textbook titled The American Republic. Boris rarely took notes in class and always carried around his textbook under his arm as if it were feather light.
“Ciao,” Boris replied looking up and closing the big heavy book like he had just mentally absorbed all five hundred pages through osmosis.
“Um, what the hell is going on with Derek?” Indigo asked bluntly looking at Boris for some sort of explanation for his temporary insanity. For some reason, Indigo was always able to keep it real with Boris.
“I guess he has a girlfriend, huh?” He replied reading Indigo’s inner dialogue.
“Um, yeah! Hi! I didn’t get the memo that psycho beyotches were desirable for the feasting season!” Indigo screamed in a whisper.
She was finally starting to release some of the pressure that had been building up in the last hour and she was about to let a rip when Ms. Phillips came in and called on her to introduce the next unit.
“Ok, class, I hope you enjoyed the beautiful weekend. Let’s get started. Indigo, would you please review the highlights of Unit Nine: Continuity & Change,” the middle aged teacher asked nicely.
Come on! Not today. Not me. Indigo said to herself. Never a fan of reading ahead, she wasn’t at all prepared to launch the next section of U.S. History. But luckily, she had watched a recent special on the History Channel with her father that analyzed the political intricacies behind The Iron Curtain, and she remembered that the Cold War was after Hitler, so she took a shot in the dark.
“Um, the Cold War?” She answered softly in the form of a question and immediately paused for affirmation. Like always, when faced with adversity, the naïve teen began to perspire. Ms. Phillips offered an encouraging smile and in her peripheral vision, Indigo could see Boris pointing at his chin.
“Russia? . .Oh, Communism? . .JFK? . .Cuba? . .Uh, Civil Rights, Martin Luther King” she added with slight uncertainty, gaining momentum almost to the point of stuttering.
“Yes, very good. Those are all correct.” Ms. Phillips finally brought an end to the quiz show madness. She continued, “Today we’re going to start looking at the many events of the latter half of the 20th century that prompted dramatic changes in America and around the world. And we are also going to consider the political and philosophical ideology that motivated this synthesis.”
As Ms. Phillips began to explain the details surrounding the formation of the North Atlantic Treaty Organization between the United States and its Western European allies, Indigo mentally revisited her own lineup of allies and enemies.
I can’t believe Derek is going out with Emily! How could he do this to me? He knows that I hold her in contempt---and for just cause. So why would he do something like this to hurt me? O-M-G, is he mad at me? Is he mad about the alleged John Harper hook up? But I didn’t even do anything. But I should have if I knew it would come to this. Indigo’s mind began to fast-forward through the events that lead up to her love loss, which was another victory for Emilia Valentina.
“Ok, let’s see.” Ms. Phillips scanned the room for her next victim. “Suzuko, please tell us what defines Communism.” Ms. Phillips was up at the large touch screen mounted in the front of the room. She enlarged the underlined term with her stylus.
Suzuko looked up from her note taking, flipped her jet black hair to the side and smiled like she was on a television game show.
“Yes, Suzuko.” Ms. Phillips gave the Honor Student permission to answer.
“Would you like the textbook definition?” she asked.
“That will be fine.” Ms. Phillips said in agreement.
“Communism is a governmental system operated by a single authority or head of state, void of private ownership but categorized by a shared labor force where the economic, political and social goals are for the overall good of the entire community; hence the origin commun, which is French for common. On a personal note, I think it’s aged and morally destructive philosophy.” Suzuko finished, smiling like a champion, as if she just won a turn in Monopoly to advance to GO and collect her $200.
“Thank you, Suzuko. And Tarik, please give us an example of a contemporary communist state?” Ms. Phillips continued to push forward the train of thought.
Tarik Soulemann, who had been murmuring back and forth with Rahman Abdullah hadn’t really been paying attention and was caught off guard when he heard Ms. Phillips call his name.
“Um, can you repeat the question?” He begged the teacher who was clearly wearing a look of annoyance. In Tarik’s favor, the bell sounded.
Ms. Phillips, hurried to finish up her remarks, “Ok, class since we didn’t have time to hear Tarik’s response, tonight’s homework will be a typed two-page proposal for a modern idealistic government. Please draw from the tenets of communism as well as democracy.” And please check your emails this afternoon for the supplemental reading attachment on Marxism. That’s all, thank you.” Moans and groans could be heard over the movement of chairs and zipping of schoolbags, as students prepared to leave the classroom.

Sixteen-year-old idealist Indigo Washington, a student at Union High School in Philadelphia, dreams of becoming a filmmaker but also feels the pressure of her parents’ expectations to find a more practical career. In the meantime, Indigo looks to her older sister, Marisol, and her friends Penny, Derek, and Boris to help her navigate the windy path of life.

Heavy loads of schoolwork and extracurricular commitments keep Indigo away from her interest in filmmaking and from the school’s Earth Day celebration. When she later learns that following the event, her nemesis, Emilia Valentina, has started going out with Derek Johnson, her tennis teammate and secret crush, Indigo is angry and upset. Pushed by her rebellious best friend, Penny Charleston, she decides to make a documentary about her classmates for the spring talent show. As the show approaches, however, drama among Indigo’s friends increases. Indigo is caught between her friendship with Derek and her deeper feelings for him, bearing witness to Derek’s duty to overcome the social obstacles that arise from growing up in one of Philadelphia’s toughest neighborhoods.

Following the trials and tribulations of a small group of teens at a Philadelphia high school, this young adult novel offers an intriguing ride through adolescence and urban youth culture.

Brigitte White was born and raised in the city of Philadelphia. She attended Princeton University and received her degree in dental medicine from the University of Pennsylvania. Brigitte enjoys traveling with her family and organizing cross-cultural youth activities.