Recipes from a Teacher’s Oven 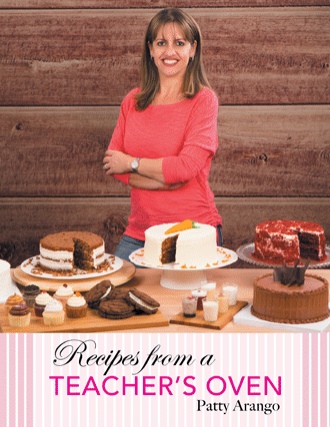 It all started in 1996, with the birth of my son. I had always had a love for the kitchen, making just about any recipe I can think of. I was in my early 20s. Everything in my life revolved around my son and I wanted to give him the best I possibly could. We were living 45 minutes away from the rest of my family. Since I took time off of working to raise my son, I wanted to make sure every holiday was special for him. I would buy pans and decorating supplies and made those famous Wilton star-tipped cakes that you see on decorating magazines.

Throughout many years, even before my son was born, I loved to cook. I would make every meal from scratch, constantly trying to invent different ways of cooking a certain ingredient. I would collect recipes and put them in this giant orange binder that my kids today joke about, calling it “the book”. In it you’ll find a recipe for just about anything you can think of from lemonade to black beans. Some of them are magazine clippings while others are handwritten. You can even say that reading the handwritten ones are like deciphering Morse code – extremely challenging. Today, you can find this big orange book on my bookshelf at home, overflowing with hundreds and hundreds of collected recipes. I often remind my kids about the importance of preserving “the book” and constantly adding to it. Not only would it become a family heirloom of some sorts but it would become a fuel for my passion of baking and cooking.

Halloweens, Christmases, even Easters would pass for about 4 years or so and two major events happened: 1) We moved back into my old apartment to be closer to family and 2) I decided to go back to school. I had always wanted to be a teacher and this was my chance to finish my education to do so. After graduating in 2004, I was immediately hired and began my career as an elementary school teacher. I had given up on decorating and making cakes. I still baked every once in a while, but mostly when there was a family gathering. Around 2005, my aunt began visiting more often. After my mom and her siblings came to America, she decided to head to California instead of Florida, resulting in a very distant side of a family that is just as supportive.

My aunt was always an avid baker. She loved to invent different forms of desserts and would make the most out of what ingredients she had. Running a home daycare as her business, she fed these children with the most amazing Cuban delicacies – the same way my mother fed me and I fed my children. But was even more incredible is that she had my grandmother’s recipes. You see, my grandmother was already very frail and couldn’t really speak so much anymore. Without my aunt, certain recipes would be lost forever, never to be shared and experienced by others.

With my grandmother in a nursing home, she was extremely ill. My aunt came to Miami for a period of three months, making sure to be with my grandmother as much as possible. In 2006, when my grandmother died, my aunt was right there with us. Every day, we would get together and cook. Dessert was always interesting. The same way she kept her recipes, I kept mine. We shared a common bond through the love of the oven, the same way a mother shares her heartbeat with her newborn son. This would only be the beginning.

Over the many years with my aunt, she began to show me the way of certain recipes. She ensured that everyone would savor these amazing creations. Most of these recipes have no written measurements or instructions. In fact, none of them were ever written. They were passed down orally, the same way stories have been spread through generations. In this book, I share three of my favorite family recipes: Arroz con Leche (Rice Pudding), Flan, and Pudin de Pan (Cuban Bread Pudding). Although very tough, I managed to create measurements to each recipe as best as I possibly could.

Time definitely flew. In fact, I had my second son in 2003, and my third in 2006. They both changed my life completely and only inspired me even more to do greater. My youngest son’s third birthday came along in 2009 and this was my chance to get back into decorating. Instead of spending the money on an elaborate cake, I decided to learn all the skills of cake making. I bought fondant, colored it, and learned to roll it. Since the theme was Elmo, I covered a square cake and placed the Elmo head on top which was done with the star tip. Of course, there were some things I didn’t know about, like supporting rods in a multi-tiered cake. The Elmo began sinking by the time we cut it.

After my son’s birthday party, friends and family members began asking me to bake cakes for their kids birthdays and other events. This newfound business gave me the opportunity to practice my skills and use all the baking pans, frosting tips, and other tools I’d accumulated over the years. What started out as a hobby, eventually took over my weekends, kitchen, and spare bedroom.

After baking her son’s third birthday cake, friends and family began asking Patty, then an elementary school teacher, to bake for their special occasions. With no formal training, but fueled by passion, her hobby quickly became a full-time business. In 2011, Patty opened her bakery, Not Just Cakes, in Miami, Florida.

In Recipes from a Teacher’s Oven, she offers a variety of her best bakery recipes which include cakes, cupcakes, cookies, desserts, dessert shots, and frostings and fillings. There are detailed instructions for preparing everything from red velvet cake, to coconut cake, cheesecake, caramel apples, brownies, scones, flan, and more. Patty also includes a comprehensive guide to preparing your kitchen with the proper supplies and ingredients so you’re ready to bake.

With easy-to-follow instructions and delicious results, Recipes from a Teacher’s Oven offers a handy guide for any baking adventure.

Patty Arango is a Miami, Florida, native and former public school teacher who set out to live her dream of becoming a full-time baker. She is the owner of Not Just Cakes which opened in April 2011. In this, her first book, Patty shares some of her best recipes.