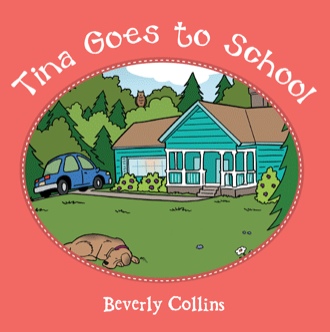 Once upon a time, in a small town on the edge of a deep, dark forest, there lived a very young fairy princess. Her name was Tina.

Tina Tortellini was the only child of her parents and was five years old. She had a dog named Hannah, whom she absolutely loved. Her best friend was Sophie Summers. And she enjoyed walks in the woods with Mrs. Owl and her other forest friends. Since Tina’s parents were both fairies, she was looking forward to growing up and doing all the things that grown-up fairies get to do… and finding out what her special gift of magic would be when she grew up. When she found her magical gift, she would finally get her wings! And become a princess, as all the girl fairies in the realm would when they got their wings.

The next morning, Tina’s mom took her to school. The human way…because in fairy kindergarten, fairies need to learn how to behave, just as humans do.

Tina entered her kindergarten room with high hopes of making new friends and learning new things. Sophie, her best friend, unfortunately went to a different school, but Tina would make new friends, she was sure.

Once upon a time in a forest lived a five-year-old fairy named Tina Tortellini. She enjoys roaming the woods with her forest friends, and she looks forward to growing up and getting her wings so she can do all the things grown-up fairies can.

Fairies need to learn just as humans do, so Tina must go to school. She’s excited to make new friends and do fun things in fairy kindergarten. But on the first day, the children make fun of her name. She is sad and her feelings are hurt.

In Tina Goes to School, a picture book for children, Tina’s mom and teacher help Tina and the other children learn the importance of being kind to each other.

Beverly Collins is a Texas native and author who enjoys hikes in the forest and watching wildlife and her four-legged children.