The Dictionary for Women

by B. Lyric & With Scott Shanks 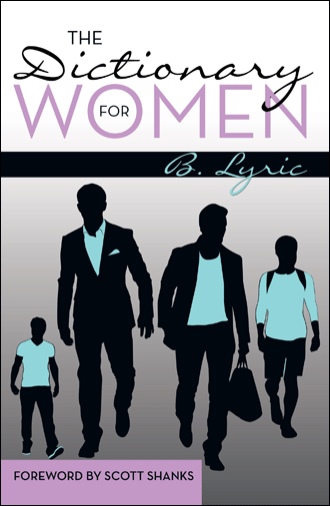 The “3-5 Theory” is one that suggests that it takes the makeup of 3 to 5 different men to be the equivalent of one perfect man.

A little girl grows up, piecing together this fantasy man. She gathers ideas from movies, books, the romantic things she’s seen her friend’s boyfriend do, the relationship between her mother and father, and even some outrageous thoughts she’s managed to brew up herself. She fails to realize;

2.) Her girlfriend and mother probably think about leaving their men on a daily basis.

She’s a woman now. Relationship after relationship has passed and each has left her more disappointed than the last. She decides she’s done with relationships. Only casual dating for her until someone worthwhile comes along. So, she’s dating four men currently. (not having sex with all of them, just dating.)

The first man is a blatant deadbeat. He has no job, no money, and no goals. But this is acceptable because his body is gorgeous, he’s blessed below the belt, and his sex game is crazy!

The second guy is very goal oriented. He’s educated, wealthy, spiritual, and an overall nice guy. The problem is his swag. He has none! He’s boring and can’t keep her interest for more than an hour.

The third candidate is a die-hard romantic. He’s older, likes to spoil his woman, and knows exactly what she needs to feel special- flowers, candy, jewelry, dinner, vacations. All this is great, but the constant malfunction in the bedroom is definitely an issue.

And last but not least there’s “the friend,” the one that’s always there when she needs him. Whether it’s changing a tire, hanging a picture in the house, or just giving her a shoulder to cry on, he’s always there. But he’s stuck in the friend zone. He’s been there for about four years now and it doesn’t seem like he’ll be moving anytime soon.

This woman wakes up one day and concludes that this is the happiest she’s been in years. She can’t really figure out how she could be so satisfied with her love life when she has no real commitment to any one man. She takes out a note pad, jotting down the pros and cons of the four men currently in her life. She realizes that if she combines the positive aspects of all the men, she will find what she has been desperately searching for…her fantasy man.

The foundation of “The Dictionary for Women” is an elaboration of this “3-5 Theory”. Above is a brief description of four types of men that women may encounter in their lifetime. This handbook will go into the many juicy details of the varieties of men we have the pleasure of meeting and will also explore theories and terms that influence our love lives.

What combination of men are you currently dating?

Does it really take three to five different men to make up the equivalent of one perfect man? B. Lyric definitely thinks so. In The Dictionary for Women, Lyric bases the foundation of her fun guidebook on this theory, providing real-life juicy definitions of the variety of male personalities women may encounter while dating.

In addition to highlighting many personalities that include the Baby Daddy, the Mousewife, and the Penny Pincher, Lyric also explores theories and terms that influence a woman’s love life. Through relatable, sometimes humorous examples, Lyric provides ladies with an opportunity to reminisce about past dating experiences, contemplate future relationships, and appreciate that dating is a multifaceted process. Included in Lyric’s handbook are interactive questions, quizzes, and other fun activities that assist women in understanding the complicated—or at times not so complicated—male mind.

The Dictionary for Women shares vivid titles and thought-provoking definitions of the men women date that will help ladies realize that there is no such thing as a perfect man, but instead, a perfect man for every woman.

B. Lyric is a talented author, poet, song writer, and motivational speaker from Philadelphia, Pennsylvania who has been writing since the age of nine. She enjoys writing most about love, relationships, real women issues, and spiritual inspiration. Her biggest hobby outside of writing is spending time with her amazing husband and beautiful baby girl.

When B. Lyric decided to write The Dictionary for Women, she had an anthem for women everywhere in mind. She noticed that men and love seemed to always be a hot topic around her and she had spent so much time talking about the good, the bad, and the ugly of relationships with her friends and family. They had laughed and cried over their male troubles several times throughout the years and she truly believed there was a story that needed to be told. Not just the story of herself and those close to her but the story of so many women in America that had experienced something similar to what the women around her were going through. She wanted to give her readers something that would not only make them reminisce and ponder over past and present relationships, but also laugh along the way over the things that many women say amongst themselves but don’t have the guts to say aloud. A book that would make women feel like they were talking to a best friend or make them pick up the phone to call them. She was so invested in collecting the biggest sample of opinions from real women, that her interviewing began to exceed her friends and family and venture out amongst various women she would encounter. She excitedly jotted down experience after experience until she had enough documented to create what is now The Dictionary for Women.

Lyric does not intend for the book to bash all men but humorously poke fun at real life situations. In fact, she admits that writing this book helped her to realize what a good man truly is and is partially responsible for the great relationship she has with her husband. She truly hopes her readers enjoy the book and all the laughs, questions, and conversation it has to offer.