Secrets of the Cloth

The Powers That Be… 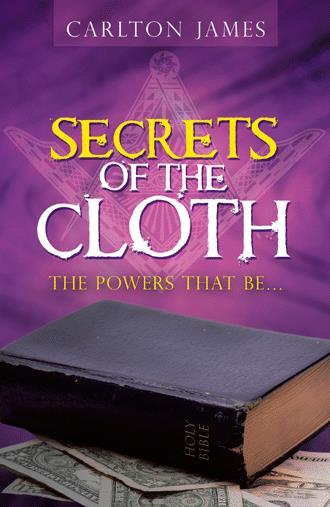 The high spirited conversation ceased as the door of the warehouse opened and the entourage walked in. The mere presence of Wells and Phillips altered the climate of the room. All over the building, men gaped, openmouthed at the unbelievable sight of two of the country's most popular preachers standing where they had expected the Powers that be to stand. There had been rumors about the pastors connections to the underworld, but most dismissed them as just that--rumors. Not too many gave serious thought to the folklore that ran rampant in the streets and they explained the conspiracy theorists ideology away as urban tales. But--here they were in the flesh, standing in all of their grandeur. Not as preachers but as gangsters.
Wells dropped the Louis at his feet and stood there, searching each man's face. His caustic, penetrating glare caused the men to inwardly cringe. Mark Low stared in complete amazement at how Wells was able to captivate the room full of killers with just a look. Not a pseudo-gangster unit but a look that, without effort, announced the undefiled power that he possessed.
Wells held up both hands and brought them together to form the sign of enlightenment. He moved the sign from side to side to make sure that everyone there was able to clearly see what he was doing.
Mark Low wrinkled his forehead, his eyes wide, confused. He glanced around the warehouse to see if any of the men recognized what Wells was doing. A few faces gleamed as they mentally linked the sign to the one made famous by a well-known music mogul, but most stood expressionless naively unaware of what they were witnessing.
"In the beginning, God created the heaven and the earth--" Wells bellowed in a sermonic like voice. "...and the earth was without form and void-- darkness was upon the face of the deep. And God said, 'Let there be Light'. Behold--the pale horse!"
"Oh, shit! I read that book when I was in prison. What the fuck?!" Devante mumbled to himself. He turned to Mark Low. "Bruh, is this shit for real? These niggas Illuminati?!"
Mark Low shrugged. "I dunno--I guess so." He answered hesitantly. He watched Wells and Phillips with a flustered expression knowing that they couldn't have been sanctioned to disclose this type of ritualistic 'lit. What the fuck they thinking?
Mark Low was only a third degree master mason-- a soldier and neophyte. What he was witnessing was above his level of understanding but he knew enough to know that what the preachers were doing had to be a gross violation. He glanced around nervously, paranoia making him feel as though they were being watched.
"No longer will we be the keepers of the dead." Wells said solemnly. "Torches are lit for the sole purpose of Illumination-- enlightenment. Tonight we raise you from a dead level of darkness to a living perpendicular of light. You have proven yourselves worthy to have your grade of consciousness elevated to the pinnacle of understanding. We offer you a 'beautiful system of morality veiled in allegory and illustrated by symbols and character'."
"If you are prepared to pledge your: Life, Love and Loyalty to the movement and to the evolution of this dynasty, we invite you now to approach--one at a time-- the altar of this ghost lodge to have the cornea of your third eye singed, that ye may receive sight."
Phillips grabbed the handle of a branding iron that protruded from a cast iron pot sitting on a table behind Wells. The pot was filled with amber red coals that splintered and danced around the poker as he stirred the smoldering fire.
"Approach the altar with Caution for this is your new name. As a brotherhood, we exercise Caution and due diligence in every area of our life."
Before Wells could completely finish the altar call, G-baby was already halfway out of his shirt and heading in his direction. He stopped and stood directly in front of Wells. His blooming, muscular chest poked out and a grave determined expression on his face. Wells stared into the young man's eyes looking for any sign of weakness.
"Young soldier-- I, illuminate you over the pyramid." Wells pointed down at his feet to show G-baby how to stand. "..and under the watchful eye of the supreme architect. Over and under." He leaned forward and whispered the Secrets of the Cloth into G-baby's ear.

James, Carlos, George, and Arthur met as fraternity brothers in college. Back then, they were hazy representations of the men they would one day become. By some sort of miracle, each of the four develops as a strong leader, pulled to the power of the church. In adulthood, they reach the pinnacle of career success as influential mega-church pastors.

However, things are not what they seem. These four friends hold more authority than any men rightly should. The full package, they have charisma, good looks, money, and Ivy League resumes. To the average layman, these church overseers are the epitome of what a spiritual guru should be, but to the keen observer, they are more feared than loved.

To those enlightened by truth, the reality of their identities is clear. James, Carlos, George, and Arthur are not "men of the cloth" but gangsters who run both their churches and the streets with dictatorial glee. With rumors of ties to the Illuminati circulating, these four prominent pastors are now catapulted from the crime-riddled streets of Jacksonville, Florida, to the forefront of a secret, national movement that threatens lives and even souls.

Carlton James has the uncanny ability to script stories that fuse controversial realism and gritty fiction, producing steamy, movie-like sagas. He writes from Jacksonville, Florida, and on any given day, you may catch him pecking away at his laptop in Hemingway Plaza.