The Transient, the Emperor, and the Man Left Alone 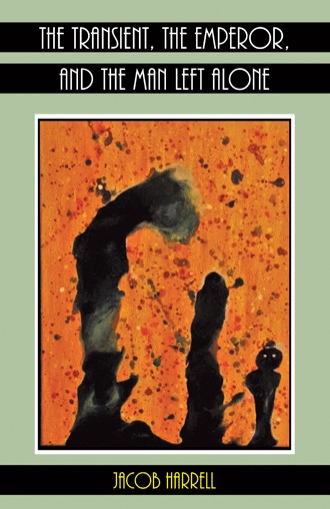 Once again, he was alone in a new land. He turned and walked back down the road, back to the bridge, up the river channel, and back to his pile of clothes on the bank. It was all still there, just as he had left them. He thought about putting them back on, but then, something caught his eye. It was a red fruit hanging from a tree. In fact, the entire tree was full of delicious-looking, red fruit. It hadn’t occurred to him until just then, but Derren was fiercely hungry. He reached for one of the red fruits and pulled it from its branch. It had a skin like that of an orange, but was shaped like that of an apple. He quickly peeled it, allowing the rind to fall to the ground exposing the bright, red flesh underneath. Derren took a quick, juicy bite. It was sweeter than he had first imagined it would be and it reminded Derren of an over-ripened grape. It was perfect, just what his belly had needed after a long journey. Within an instant, Derren had devoured the fruit. It was so pleasing to finally have something fresh to eat as opposed to the processed garbage he had been forced to endure throughout his adventure. Derren marveled at how fortunate he was to have landed here in a land of plenty. All around him, the trees and bushes were swollen with purplish and reddened and greenish and blue fruit. The water that flowed through the forest was clean and free of any contaminants. The wildlife seemed happy and content. It was as if he had landed squarely in the Garden of Eden. And then, the toxins of the fruit violently twisted and turned his gut in all manner of directions. All at once, he bent over in a fit of searing, abdominal pain. Sweat beaded up through the thousands of pores on his face and back as he fell to the ground into a contorted, fetal position. His eyes slammed shut and his jaw clenched together in an effort to hold the pain at bay. The toxins clawed at his insides like a rabid raccoon ripping into each tender organ. It was the most painful experience he could remember having in a long time and it helped to remind him of his own mortality. Not like this, he thought, not like this. Please don’t let me go like this. I’m not ready to go. Not yet. Not yet. Oh, please Lord, don’t let me die like this. He had ignored the one, cardinal rule of interstellar survival and now he was paying dearly for his mistake. Always check the toxicity of the food before it is ingested. How could he have forgotten that? His body did its best to respond to the toxins by attempting to evacuate every foreign object from its borders, but its attempts seemed all in vain. Vomit spewed from his mouth in a violent burst of partially chewed fruit and bile and his rectal cavity exploded in a terrible, fecal spray, and still, Derren received no relief from the effects of the toxins. There was nothing for him to do other than to wait out the toxins and pray they weren’t as severe as they were panning out to be. The sun had just begun to set and if only he wasn’t so caught up in his own internal dilemma, he would have been able to enjoy one of the most amazing sunsets of his entire existence, but he was so consumed by the pain and fear of dying that he simply couldn’t the time to embrace the more beautiful parts of the world around him. Even with the sun taking its gingerly, sweet time, Derren was unable to break away from his self-absorbing behavior to enjoy it for even a brief moment. He just remained on the rock, curled into a tight ball of agony as the darkness crept slowly upon him, and then, with one more ferocious evacuation of his bowels, the day had finally succumbed to the night’s advances. It was one of the longest nights of Derren’s life. Actually, it was the longest night of his life thanks, in part, to the slow rotation of Mellona. But, for him, it was made even longer by the compounding effects of food poisoning and chilly temperatures. There was no rest for him throughout that long night. The air temperature had dropped to uncomfortable levels, and the rock he was curled up on was even more uncomfortable than that, and in between the periodic bouts of gastro-intestinal exodus, Derren convulsed and writhed in his pain, and the night wore on and on and on. Finally, the day broke and with it, so did the sickness, but not without leaving Derren in a state of extreme exhaustion. He had emerged from the poisoning drained of any physical energy He was severely dehydrated. His muscles, being taxed by the sickness, were tight and sore. He crawled along the rock to the river bed and put his parched lips to the water. He could feel his cells swelling with the re-introduction of fresh water. He sucked up handfuls of the water until his belly was quite full and felt as if it were to pop.

Derren Washington’s life has never amounted to much, and lately it has become boring and stale. Sure, he does well for himself. He has a job, a place to live, and is breathing and living—enough for most people and all Derren believes he needs. And then one morning, Derren is awoken to an unexpected knock that changes the course of his life, spurring a mad journey that he never could have possibly imagined. Confronted with the sudden loss of his apartment and, subsequently, everything he has ever owned, Derren must face the insensitive marriage of blind chance and sheer coincidence. His situation becomes even more dire after a regrettably made phone call finds him abducted by a group of towering extraterrestrials who have mistaken him for their long, lost emperor. Now Derren struggles to navigate and survive in a baffling world amid suffocating seas of deceit and absurdity in hopes of one day making his way home and finding some meaning in his life. This science fiction novel tells the tale of one man’s unintended adventure as he stumbles from one confusing world to another in an attempt to regain what he has lost.

Jacob Harrell is an aquatic biologist, an avid reader, and a passionate outdoorsman with a fondness for pancakes and syrup. This is his first published work. He and his wife, Kyrstin, live in Cincinnati, Ohio.