A Story of Addiction and Recovery 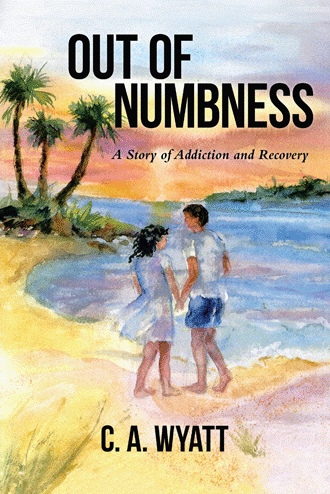 In his book Out of Numbness the author shares his experiences from his days in active addiction to a spiritual solution in recovery. He tells of his introduction to drugs in his youth- seeking acceptance from others while the obsession and compulsion of his addiction is unleashed. He grows up in that drugs, sex and rock and roll culture of the early 70’s. The story goes on- following the downward spiral of a young man getting a promising career as an aerospace engineer in 1976, but whose nights fuel his self-destructive addiction with his nightclubbing and use of drugs. He’s haunted by the death of his diabetic father, unable to handle his mentally ill mother that moves in with him, and is broken hearted by unstable romantic relationships with women he meets in bars. This is the author’s chronicle of disillusioned nightlife in the late 70’s and early ’80s, before he’s introduced to recovery in 85- where he’s introduced to a new way of life, but still struggles with some of the drama and chaos of life and a long relapse.

The recovery discussions in this book are compatible with stories and principles in twelve steps programs, but this book is not to be mistaken for approved literature from a twelve-step group, such as Alcoholics Anonymous (AA) or Narcotics Anonymous (NA). Quotes from literature from the above organizations will be found throughout this book, and references to other books on recovery and psychology, as are quotes from religious literature.

Suggestions are made in this book and hopefully those who read these lines will meet those suggestions with open minds. The book is also intended to familiarize the reader with the inner workings of the mind of an addict and subjects related to addiction- such as codependence, enabling, relapse, suicide, and contraction of illnesses sexually and intravenously.

Author C. A. Wyatt was introduced to drugs and alcohol in his youth, seeking the acceptance of others while growing up in the predominant culture of sex, drugs, and rock and roll in the seventies.

In Out of Numbness, Wyatt shares his life history and experiences from his days of active addiction through his search for a spiritual solution in recovery. As a young man, he began a promising career as an aerospace engineer in 1976, but his self-destructive addiction prompted endless nights of clubbing and drug use. When his father passed away in the early eighties, Wyatt was haunted by the death; when his mentally ill mother moved in with him, he was unable to cope. He found himself constantly brokenhearted by unstable romantic relationships begun with women he met in bars. Disillusioned with nightlife, Wyatt finally set out on the road to rehabilitation in 1985, when he was introduced to a new way of life. Although he experienced drama and setbacks in the chaos of life, the spiritual enlightenment of recovery has served as his guiding force ever since.

This memoir, seeking to offer understanding and hope for those struggling with addiction, shares one man’s lifelong experiences on the path to recovery.

C. A. Wyatt holds a BS in electrical engineering from the New Jersey Institute of Technology and a master’s degree in engineering management from the University of Central Florida. He worked for more than thirty-two years as an aerospace engineer at NASA’s Kennedy Space Center before retiring in late 2008. He is the author of several short stories as well as a work of nonfiction, Memories from the Land of the Intolerant Tyrant, on the Cuban Revolution and life in Cuba.