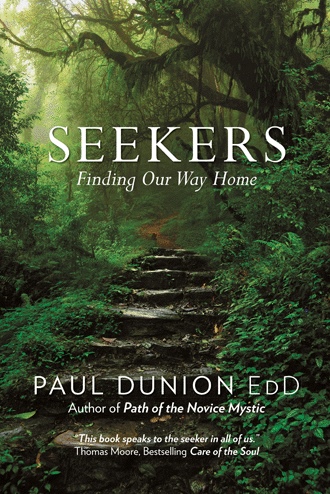 Do you find yourself living with an ongoing, unquenchable restlessness or passionate curiosity and wondering why this is the case? You can restore your faith in your destiny as a seeker—someone in search of a genuine understanding and experience of home.

Seekers: Finding Our Way Home offers a vivid portrayal of seekers as pilgrims questing for home. Seekers are threshold dwellers, and home takes on both an ancient definition of the word — “a place to linger” — and an active ideal, involving doing what it takes to make peace with change and therefore with the journey. This exploration presents an account of seeking that strengthens a facility for identifying where to linger and how to move in order to avoid spiritual homelessness. It also offers concrete guidelines for seekers’ self-care. Strengthen your capacity for presence, imagination, and enchantment, and learn from the example of a heartening illustration of an aging seeker.

Encouraging and inspiring, this guide invites you to sustain the faith that seeking was always what you were meant to do.

Paul Dunion, EdD, LPC, has been in private practice for over thirty years. He is the founder of COMEGA (Connecticut Men’s Gathering), Boys to Men (Mentoring Project for Teenage Boys), and the Croton Mystery School. He has written four books: Temptation in the House of the Lord, Shadow Marriage: A Descent into Intimacy, Dare to Grow Up: Become Who You Are Meant to Be, and Path of the Novice Mystic: Maintaining a Beginner’s Heart and Mind. He lives with his wife Connie and dog Bo in eastern Connecticut.