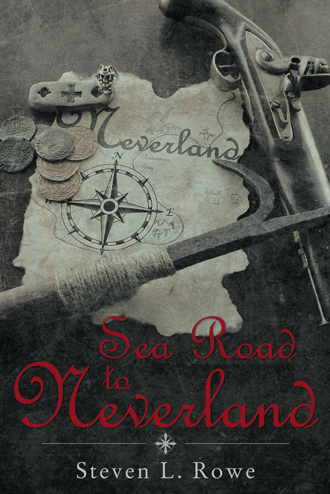 James proved to be magnificent with his blades, the rapier for offense and the dagger in his left hand to fend off attacks.

He had learned to fence at Eton, as he had learned so many other useful things. Because of what was common rumor about his background in those days, he often had to pit his fledgling skill against two and even three boys his senior in years if not in ability. Those lessons in the unfairness of combat had stood him well in the years since, and never more valiantly than on the docks of Isla de Tres Palmas.

Ah, if only his father could have seen him at that moment. No doubt the man would have disapproved of why his disgraced and disowned son fought, but even he would have to admire the skill with which an English sword stood against Spanish steel. Slash, parry, thrust and thrust, parry again and riposte to fend off three blades at once.

How his blade sang in the early morning air with joy at being wielded by a cool wit, a keen eye and a firm wrist! A moving net of gleaming steel that baffled the blades of his foes and left two opponents gasping their last breathes on the stones even as three more crowded in to replace the two disposed of.

It was a noble, even epic effort from James, though his cause was not a noble one. His rapier and dagger formed a wall of deadly steel thorns that kept back five of the Spaniards while Cecco dispatched another and Dusk, aided by Jacob, took down two more. The curls of his long black hair flying wildly, James was at last in his element, the place in all the world where he was at his very best, and moved naturally and without thought in the very best of form.

His every move was true, without deception or even a hint of malice. What he did with his sword was what had to be done, and done in the purest of intent. It was a battle against odds in which he never took unfair advantage, pitting only his superb skill against those who sought to match their ability against his.

For the moment, the only motive James had was to complete that deadly dance as it should properly be done, without thought to anything but the terrible beauty of mind, body and steel acting together in a contest where only one man could be the winner.

It was not bad form on the part of James to see that as a battle that only he could survive. It was, because of the unconscious purity of the moment, the very best form possible. He did not even note that his mouth told the others to get the wounded aboard and prepare to cast off, or that they obeyed him with frantic haste. He did not see Dick Brown pause too long and meet his end on Spanish steel. He did not even feel triumph as another soldier and then yet another fell to the inevitable sharp sting of his blade.

It might have gone on until the Spaniards were all dead or scattered in defeat but for the actions of the fat old sergeant. He recognized a supreme swordsman when he saw one dispatching his soldiers one after another. One thing he was certain of in a case like that: A swordsman was much less a threat without his sword.

Sergeant Pacheco had been many things in his career. A thief, a murderer, and many things even worse that had been cloaked by his service to his king. He was not, however, a coward, nor was he slow to act when danger threatened.

Dropping his own blade, Pacheco swept up an empty barrel and hurled it with all the considerable strength of his rotund body. The ungainly missile struck James and swept him from his feet, the sword and dagger flying from his hands.

Dropped thus suddenly from the dizzying height to which the perfection of his swordplay had lifted him, he was momentarily as any other mortal man bereft of his weapons in the face of several armed enemies, dismayed and uncertain.

Captain James Hook, the villain who battles the Boy Who Never Grows Up, is one of the most famous pirates in literature. But regarding his past, only a few fragments are known—a scandalous birth shrouded in mystery, service as Blackbeard’s bosun, and a reputation that inspired fear in even the worst of pirates. Set against the colorful background of historical piracy on the Spanish Main, Sea Road to Neverland tells the story of the man who would eventually be known as Captain Hook. As a young man, James turns his back on his family and set out to sea, earning the name “Hook” along the way. He takes command of the Jolly Roger from the despotic Red Michael Conner and finds a jovial Irishman named Smee among the crew. He also meets a ship’s boy named Tuck with no memory of his past—and the boy offers friendship to a man who believes he needs no friends. When the ship is driven off course and brought to a strange and unknown shore, the men instinctively fear the place, for they know they are unwelcome invaders in Neverland. Filled with swashbuckling adventure and intrigue, this novel presents the story of the life of Captain James Hook, showing a classic figure of literature from a fresh perspective.

Steven L. Rowe is an electronics technician trained in the US Army. Rowe is experienced with small-arms, from flintlock pistols to modern military-style rifles; and a collector of swords and axes. A student of history—especially the Golden Age of Piracy—he lives with his wife, Christine, in Ruskin, Florida.