Steal the Wind Reap the Whirlwind 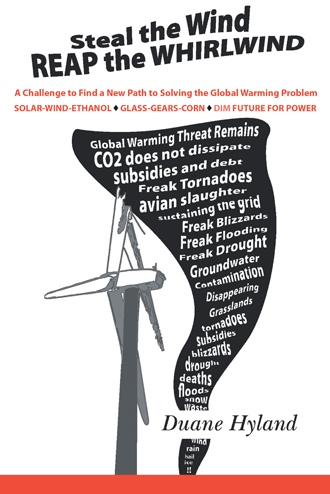 Wind is the Essence of all weather. Wind is the breeze, the squall, the gale, the blizzard, the hurricane, the cyclone, the flood, the rain, the thunderstorm, the tornado, the hail, the snow. Lasso, stifle, shackle, tame, harness the wind with man-made forests of giant machines and you disrupt the very nature of wind. Without wind, all dies. Wind is a wild mustang; free, wild, galloping, mane flowing, watchful, sometimes violent, sometimes gentle, sometimes still, defending its territory, doing everything in its own time, its own way, at its own choosing, in its normal pattern, driven by nature, not controlled by man. Lasso it, try to harness it and it rears and bucks and twists and turns, eyes glaring, nostrils flaring, violent, ears laid back, desperately fighting to be free, sometimes destroying what is in its path.

The level of CO2 (carbon dioxide) in the atmosphere has risen from about 280 ppm in 1800 to 397 ppm in January 2014, with much of the rise coming over the previous 50 years. Has this rise in atmospheric CO2 been responsible at least for some of the warming that has been recorded? Likely. Has the rise in warming leveled off somewhat over recent years? Yes. Is it likely that the earth and its population will suffer severely over the next 50-60 years from Global Warming? Probably not. Should we be developing solutions to reduce emissions of greenhouse gases into the atmosphere? Emphatically, yes. We are polluting the atmosphere just like we pollute our streams and the oceans and previously severely polluted the air in our cities! Will the renewable energy actions/initiatives we are pursuing today significantly reduce the level of greenhouse gas emissions over the next 30 to 40 years? Not much, if at all. Will the renewable energy actions/initiatives we are pursuing today significantly reduce the level of greenhouse gas already in the atmosphere? Not at all. Are these initiatives costly? Yes, extremely. Are there solutions that can be initiated that will reduce greenhouse gas emissions, in particular, CO2, much more rapidly? Are there solutions that can reduce the level of CO2 currently in the atmosphere? Yes, but it will be difficult to overcome embedded government initiatives. Are the United States and the European Union facing other more serious threats than those that may result over the near term from Global Warming? Yes, geo-political threats, stalled and failing economies, terror from a growing radicalism, new non-lethal but equally dangerous weapons of mass destruction, unmanageable debt, high unemployment, low-paying jobs, ultra-high paying jobs, disappearing jobs, uncontrolled spending, uncontrolled borders and no solutions in sight.

“The Inconvenient Truth” is that the United States will be challenged to retain its “World Leader” status. It has massive debt, growing more massive each day, with no end in sight, becoming easier each day to expand and ignore. Its leaders are impotent and “ignorant” to the damage they are doing. Our nation is leaderless on the world stage. We have lost the respect of our allies, the respect of the many nations around the world that relied on this one country to maintain international balance, and most especially, we no longer command the respect of our adversaries. Today we live in fear of the smallest countries and the tiniest groups.

This Work does not question the concern about greenhouse gases. The relationship between CO2 levels and the warming phenomenon is real and the concern is real. The level of concern, however, may not be warranted. Of equal or greater concern is that we approach solutions rationally and scientifically.

The purpose of this work is to try to influence a more thoughtful and rational process for addressing the greenhouse gas problem facing the planet. It is a real problem but we need to recognize that it is not “our most fearsome weapon of mass destruction”. It needs to be addressed but we have many problems facing this nation and the world and we cannot become obsessed with this issue and in the process hurt our environment and destroy economies and jobs and create problems that may be extremely costly or impossible to reverse.
We cannot base solutions only on what many people are “against”. We must find valid solutions that get us to where we need and want to go but transition to that goal so we don’t destroy industries and jobs that did not need to be destroyed. We must be driven by science and economics and not by social fanaticism. Our environmentalists demonize “fracking” but they supported and still support the Ethanol renewable energy initiative that has resulted in millions of acres of marginal land and open land and pastures going under the plow with an increasing need for more fertilizers and insecticides and pesticides being poured onto the land and contaminating near-surface groundwater as well as our streams and rivers and ultimately the oceans and Gulf waters that rivers flow into. These environmentalists I refer to as socio-enviro-emotionalists (socioenviroemotionalists). They are driven by emotion and twisted social values rather than science and rational thinking. They are what this author would refer to as “Woodstockers” (a metaphor for the participants in the great social upheaval that began in the 1960’s). For the last 50 years we have lived in a “Woodstock” era.

One of the great harms of the Woodstock era is that we have not educated enough brave scientists and engineers with an unbiased focus on science and engineering. We teach Woodstock social skills! This is demonstrated by the desperate need for Silicon Valley high technology industries to push for larger and larger numbers of high technology immigrants educated in foreign countries to be allowed into this country, which, by default, leads to forced acceptance of millions of uneducated immigrants which in turn leads to pressure on our educational system and even fewer highly skilled graduates of our own.

My overwhelming concern is that there are too many people with little or no scientific expertise who have too much influence and power over our leaders and politicians. Unfortunately, it is our leaders and politicians who have the ultimate power to define and mandate renewable energy initiatives. Many politicians, in fact most, lack the intelligence to properly judge whether approaches are valid and they also are very susceptible to making decisions based on re-election prospects rather than on science, and are influenced by the socioenviroemotionalists and lobbyists of every persuasion. These are self-serving “socio-politicians”. These are politicians who have no concern about saying “we need to pass this Bill so we can find out what is in it”. We have too many Woodstock Scientists whose research is driven as much by social values as by science, and Woodstock Professors who are still, in their later years, educating our susceptible students who were educated by socially driven elementary and secondary teachers. They have far too much influence and are driven almost completely by social issues rather than reality and practicality and science. This has led to Renewable Energy Initiatives that this author believes are anti-environment and economically unsustainable and are driven mostly by what these groups are “against” rather than being guided by rational thought.

The premise of this Work is that the entire Renewable Energy concept entailing Ethanol (biomass), Solar Power, and Wind Power is flawed. It is likely that the majority of supporters do not even recall the original motivation behind their rise. These initiatives are, to an extent, anti-environment and are incredibly costly in their implementation. They are subsidized in the United States and the European Union with borrowed money and are unsustainable over the long term. The long-term costs, particularly of Wind Power, will be far greater than anticipated.

Democrat Hillary Rodham Clinton says climate change is one of the “most urgent threats of our time,” and has compared her plan to install five hundred million solar panels on homes and for every home in America being powered by clean energy by 2027 to President John F. Kennedy’s goal to land Americans on the moon and return them safely to earth.

That’s an affront to America’s greatest scientific achievement and to those who made landing Americans on the moon possible. Her plan would do nothing to reduce the threat of global warming.

So says Duane Hyland, who shares the concern that CO2 can result in warming of the planet. He looks at the problem rationally and scientifically, arguing that spending hundreds of billions of dollars to stop the oceans from rising, subsidizing the construction of thousands of wind turbines and millions of solar panels, and producing billions of gallons of ethanol will do little to reduce global warming.

Join the author as he questions false assumptions and makes the case that courageous, brilliant scientists can tackle global warming by developing totally new, nonpolluting forms of energy in Steal the Wind, Reap the Whirlwind.

Duane Hyland has a degree in geology and eighty-two years of life experience that makes him skeptical of the predicted cataclysmic impact of global warming. He believes that rational science and brilliant scientists can find solutions that can carry us into the future. This is his first book.