The Quest for Hope 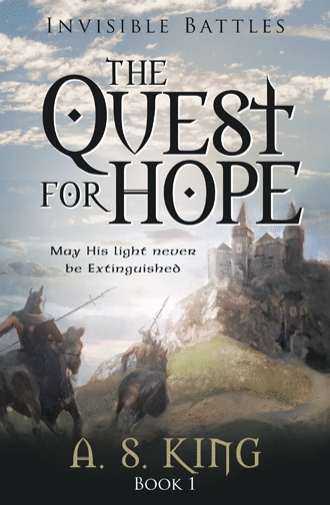 Prologue
Into the company of the crowded hall entered an Erela: a warrior, seemingly sculpted of diamonds—the many facets of his form catching the light and releasing it in dazzling patterns. He paused for a moment, facing the King and Queen of Novus who were seated on the raised dais at the far end of the room. Then, he began to move slowly and purposefully toward them. His dark eyes pierced deeply into their souls. Once he arrived at the foot of the thrones, he spoke. It was a strong and powerful voice—a voice not easily ignored. “I, Zohar, Chief Commander of the High King, have come to you on his behalf. He knows of your worries and has sent me to ease your concerns.” His tone became soothing, melodic.

“The High King is concerned that this task He assigned you is simply too much for you to bear. I have requested, on your behalf, to be allowed to relieve you of some of that burden, so that your lives might be easier.  In time, you will be better equipped for your new responsibilities. Until then, I have been tasked to share with you my wisdom and strength until you are ready to rule on your own. The High King did not mean to leave you so unprepared.” Reaching into unseen folds of iridescent cloth, Zohar withdrew a small object. “As a token of my solidarity, I bring you this, the Gem of all Knowledge. With this in your possession, you will be able to serve and protect your people, especially, your daughter—”

The Queen let out a sharp breath and her eyes widened with longing. Zohar gave her a kind, understanding smile, and focused the full force of his spirit on her alone. Very slowly, he held up his hand. The jewel sparkled, taunting her with its untapped beauty and power. Colors soared through the room in a mesmerizing kaleidoscope of light and shadow. “Come now,” he whispered, offering the Gem up to her. Malka, Queen of Novus, rose carefully and took a small step forward, scarcely aware of her action. The beauty of the Gem was hypnotizing and she found that she could not look away. Wisdom, he had promised. She would be able to better know how to serve those around her. Queen Malka moved to the end of the dias, stopping within reach of the gift. A hint of doubt crept in and she tore her gaze away long enough to look back for her husband’s approval. King Lev sat frozen, as though in a trance. Something did not ring true. He had heard of this—the Gem of all Knowledge—there was something he should know … no.  He fought to remember. What was it about this Gem? The High King had said to … or not to … not to what?  King Lev shook his head. Something did not ring true—and yet his wife looked so hopeful. He should do something.  He should— Zohar’s hand shot out and seized Malka’s outstretched palm. The queen’s eyes snapped back to connect with His. She was almost completely in his power, and yet, the choice had to be hers. Ever so slowly, he moved the Gem closer. Glancing back once more, Queen Malka beheld no movement from her husband, no indication that he was even aware of the situation. Very carefully, very consciously, she reached out with her free hand, and took hold of the Gem of All Knowledge. The instant she made contact with the Gem, a rush of energy flowed through her being. A joyful, knowing smile lit up her face. She reached out to pull her husband nearer, to give him the opportunity to share in this wondrous gift. He did not get up.  He did not take her hand. She turned to look at him, still holding the wondrous gem. “My king, it’s wonderful. All the knowledge we will ever need is within this jewel—I can feel it pulsing within me—Zohar speaks the truth; we will be able to better serve and protect our people with such knowledge. Come, take hold of it.  Join me—” The Queen held up the jewel toward the King, enticing him to come forward. Releasing the Queen’s hand, Zohar watched carefully to see if Lev would respond to his wife’s beckoning. The King, finally seeming to come out of his trance, reluctantly stood up and stepped forward. He placed his hand on the gem—connecting himself to the knowledge it possessed. His eyes widen and, like his Queen’s, his face lit with enlightenment. Zohar, smiled and reached out to cover the King and Queen’s hand which held the Gem. “And this is my real gift to you, your Majesties. May it bear much fruit.” A second pulse of energy shot through the King and Queen. The thin veil of light Zohor had been wearing since his arrival dissipated. In its place was a darkness which radiated from him into the Gem and the surrounding hall. The suddenness of the dark knowledge stunned them both. They realized, belatedly, that perhaps it was not wise to know everything all at once. The initial enlightenment they had experienced disappeared. Their faces fell. Joy gave way to pity, sorrow, disgust, shock, desperation, horror, despair … guilt. The Queen closed her eyes and shook her head violently as though to free herself of things she did not want to see. Unable to escape this knowledge by closing her eyes, she opened them again and reached frantically toward her husband. King Lev held his wife, but felt helpless to console her.  What had they done? A black fog swirled about them, and sprang out in every direction, like ink splayed across clean white paper. Dark thorns grew instantly out of potted flower basins.  Once mild animals became fierce and stood with bristling hair, ready to attack. Slowly, yet with fearful persistence, the dark fog spread throughout all creation, devouring everything it touched.  What once was good, was now broken. Suddenly, as if another fog had been lifted, King Lev’s memory returned. The Gem of all Knowledge was something the High King had promised to give them himself, a little at a time, once they had finished their training. They weren’t supposed to receive all of it at once! And certainly, they weren’t supposed to receive it from anyone else! How could they have forgotten something so important?  He looked into the beseeching eyes of the woman he loved.  Wide eyes full of remorse and uncertainty stared back. He knew he should find a way to lift her from the despair he saw encroaching in the corner of her eyes.  He knew he should beseech the High King for forgiveness.  As if reading his mind, Malka quivered her head back and forth.  She was afraid, and so was he.  They had no choice; their mistake was far too grave.  King Lev took his Queen’s hand, and a darkness that had gained a foothold within her latched more into them both.

“The High King will be furious with us,” the tormented King whispered.

In the dark land of Novus, a Light is beginning to move. As the true High King attempts to rally his forces, crystalline beings move among mortals, seen and heard only by those specially attuned to their existence. One of the Erela stands supreme above all the rest. Known as the Dark One, Zohar has all but succeeded in erasing the name of the High King from the hearts and minds of everyone in Novus. It is now up to the rest of the Erela to stop his wrath.

In an unknown community tucked away in a hidden valley, an Erela recruits a young apprentice to help carry out their important mission. As Levi embarks on a dangerous quest to fetch a princess and bring her to Zion to fulfill her destiny, she is struggling to understand why she has been chosen to be the new Queen of Novus. After twelve-year-old Aliatta learns the truth about her identity, her life intertwines with Levi’s. As the pair begins the long trek to Zion, they have no idea that the Dark One’s fury has just begun.

The Quest for Hope begins an exciting saga of good versus evil as a young apprentice and a princess journey through a perilous land so she can fulfill her purpose to become their new queen.