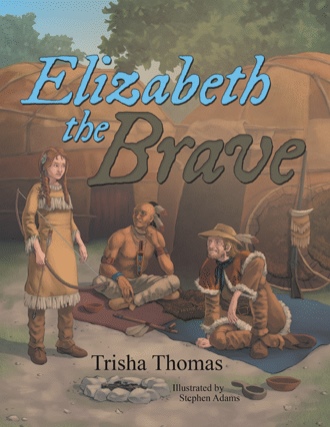 Behind the house Elizabeth’s father was chopping wood. She heard the steady thud of his axe. Job was working in the cornfield. As she glanced up from her ironing, Elizabeth noticed a group of Indians coming out of the woods on Keener’s Knob and running towards their cornfields. Their faces were painted red and black and they were holding tomahawks.
“Pa,” she called, “Indians are coming,” Her father put down his axe and came around the house. Just then the group of Indians reached Job in the field and with a swing of a tomahawk knocked him to the ground. William Spicer turned to Elizabeth.
“Run get help,” he said calmly, and stepped into the house.
Still gripping the heavy iron, Elizabeth flew down the path heading for the woods on the other side of the valley. She saw little Billy playing at the lower end of the field. She realized she was still holding the iron and tossed it into the bushes. With her free hand she grabbed Billy’s shirt yelling, “Indians are attacking, RUN!”
The two ran as fast as they could. They entered the forest and headed up the steep trail. They were breathing hard. Suddenly they heard footsteps behind them.
“Come on on Billy,” Elizabeth urged, “they’re after us.”
Faster and faster they ran, but the footsteps got closer. Elizabeth could hear them getting nearer and nearer. Then she felt a strong jerk on her braids that tugged her backwards. She fell to the ground. A tall Indian warrior stood above her holding his tomahawk high.
“NOOO,” she yelled, jumping to her feet, and trying to take off again. He grabbed her arm, jerked her back and looked her in the eye. She stared up at him silently. Slowly, he lowered the tomahawk. Two other Indians were holding Billy’s shirt as he squirmed and struggled to escape.
“Stop it Billy, or they’ll kill you,” Elizabeth ordered. The Indians spoke among themselves and then pushed Elizabeth and Billy onto the trail in front of them heading back towards the house.
When they came out of the clearing the Indians stopped and called out to the other warriors. Several Indian warriors emerged from the house. They were carrying some of the family’s belongings. Elizabeth couldn’t see any of her family. Job was still lying in the field where he had been struck down.
They didn’t go back to the house, but headed up the trail towards Keener’s Knob. Elizabeth tried not to cry. Billy choked backed tears and a sob. An Indian gestured to him to be quiet and raised his tomahawk. Elizabeth reached for Billy’s hand and squeezed it tight.
They walked until it got dark and kept on walking. Billy began to stumble and an Indian picked him up and carried him on his back. Elizabeth walked on. Her feet ached and she was tired all over. After many hours, the large warrior scooped her up and carried her on his back. They went on and on. Elizabeth did not know it, but they were heading to Ohio. Finally they stopped. The warriors put Elizabeth and Billy down. They sat with their backs against a tree holding hands and watching their Indian captors. The Indians gave them some of the food they had taken from the cabin. In the dark, tears rolled down Elizabeth’s cheeks as she ate her mother’s bread. She knew her mother was dead.
Suddenly they heard the sounds of horses and men yelling to one another. “They must have gone this way,” a voice shouted. The warriors grabbed Elizabeth and Billy and shoved them into a gully on the side of the trail. The Indians flattened themselves on the ground and were silent. One of them pushed Elizabeth against the ground. She wanted to yell out for help, but knew better. The horses galloped past.
Throughout the night they heard horses and men’s voices. The next day they lay quietly in the hollow. Elizabeth watched a line of ants busily marching along near her. She took a small stick and blocked their path. The ants seemed momentarily confused. Some went around the stick; another struggled to get over the stick and then rejoined the others. “Are they going home,” she wondered. The thought made her want to cry, but she held back. She then pretended the ants were the Indian warriors and squashed eight of them. This made her feel a little better. When night came again they went on, walking for hours and hours.
Finally on the dawn of the second day they came to an Indian camp along a river. Small wigwams dotted the camp. Indian women were cooking at fires and children ran in and out among the wigwams playing. The warriors took Elizabeth and Billy up to a woman sitting by a fire. She had two long braids that were black with streaks of gray hair. Next to her was a beautiful young woman holding a tiny baby. They said a few words to the older woman and gave her a bag taken from the Spicers’ house.
The Indian warrior who had carried Billy knelt down by the young Indian woman and stared at the baby. The Indian woman spoke rapidly and smiled and laughed. The warrior gently touched the baby’s head. Elizabeth did not know it, but she had arrived at the Wakatomika, the Shawnee village on the Muskingum River.

Twelve-year-old Elizabeth Spicer is a plucky pioneer girl living in a time when settlers and frontiersmen are pushing Native American Indians off their lands, invading their hunting grounds, and killing them. As she and her family go about their daily life in a log cabin in Pennsylvania, they begin to hear rumblings that the Indians are on the warpath. When she glances up one day and sees Indians approaching their cabin, Elizabeth does not realize that her life is about to be changed forever.

Without any idea of what has happened to the rest of her family, Elizabeth is captured along with her brother, Billy, and taken to a Shawnee village by Singing Arrow, a fierce warrior. Fearing her parents are dead, Elizabeth bravely attempts to learn the Indian culture and befriends the daughter of Elizabeth’s adoptive mother, Raincloud. While Elizabeth nurses a grudge against Singing Arrow, Billy throws himself into his new life. As they learn to survive in different ways, Elizabeth and Billy discover the bonds of friendship, the value of peace, and the significance of unconditional love.

In this tale based on a true story, a feisty pioneer girl and her brother must find happiness among a Shawnee Indian tribe after they are captured and taken away from their family and home.

Trisha Thomas is an American-born journalist who has been working in the Rome Bureau of the Associated Press Television since 1994. In addition to covering two Papal Conclaves, she has traveled around the globe with Popes John Paul II, Benedict XVI, and Francis. Trisha is a blogger, mother of three, and lives with her husband in Italy.