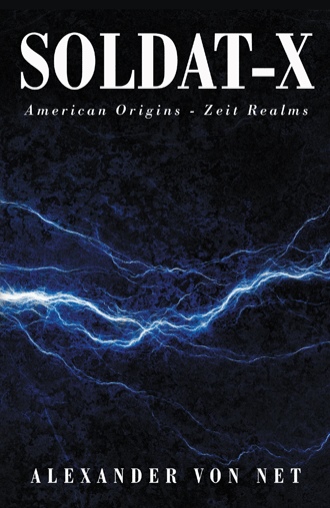 The rocket’s payload was finally in orbit, having narrowly missed all the space junk floating around. Com-Boy deployed from its delivery shell and activated its thrusters to obtain the proper geosynchronous orbit around Earth over the East Coast.
Earth was a dreary, apocalyptic world. The cities on the East Coast had long since been leveled. Debris and wreckage of vehicles and buildings littered every mile. The roads were simple trails people had cleared of junk.
The sky was filled with dark clouds and straight, parallel rays of bright blue and purple that periodically flashed.
Strange insects, half-metallic and half-organic hummingbirds, hovered around certain small areas in each colony of humans.
Some refugees huddled around encampments made up of wrecked vehicles, scrap metal, and parts of ancient buildings. These men, women, and children were attempting to survive another day in a clearly hostile world.
Above them, flying in formation, were three small, tube-shaped aircraft with lights and long, straight, tapered wings and propelled by small jet engines. From a distance, it seemed they had dropped small payloads that exploded when they hit the ground. “Run! Drones!” someone yelled. The person yelling had been a woman, her son, along with another woman who had raced to find for shelter, and refuge.
The drones fired electromagnetic energy beams and wire-guided rockets that hit their human targets as cybernetic ground forces advanced on the people. Explosions and bright lights permeated the ruins the people were trying to navigate to safety.
Another woman was running with a baby in her arms, desperately seeking shelter. A beam of energy fired by a drone reduced them to charred skeletons.
Before the two women and the boy could reach the crowd ahead of them, enormous mechanical creatures caused the ground beneath them to shake. Marching in military unison, holding lightweight machine guns, were five foot ten cybernetic beings, the Beneficiarius infantrymen, cold and cruel combatants governed by artificial intelligence software that controlled most of the planet Earth, Centron Control.
A group of men fleeing the creatures desperately ran to a bombed-out shelter for cover. The Beneficiarius troops got them in their holographic sights and opened fire. The men, gunned down mercilessly, lay in pools of their own blood.
“Tye, hurry up!” the woman barked at her son. The boy was struggling to keep up with his mother and escape an enormous mechanical creature stomping the ground and causing it to shake with each step.
A different-model Beneficiarius soldier that had a fixed, built-in, cylinder-shaped rail gun on its arm, targeted the women and the boy, but luckily, the three jumped into a pit, a trail that led to a damaged, ancient skyscraper. “I’m okay, Mom!” the boy yelled.
“Run, boy! Run to that building. Anci, grab his hand!”
Anci, an attractive, dark-haired young woman, was a close friend of the boy and his mother. She held his hand as they made another desperate break for the building. They felt and heard a massive force crash on the ground behind them. Anci looked back. “It’s the giant ones! They might be trying to capture us!” Anci yelled.
Anci, the boy, and his mother ran into the building and up the stairs. The behemoth was using its large, hydraulic-powered hands to climb the building as if it were a primate climbing a tree.
Anci was still holding the boy’s hand as they made it to the fifth floor. “Anci, I have to rest,” the mother said between gasps.
“Andria, we have to stick together. We have to hide in here somewhere.”
Andria, who was thirty-nine, was leaning against a wall. They heard the behemoth climbing the building and saw its claws piercing the walls. Andria screamed as the mechanical hand pierced the building, retracted, and pierced it again. “Mommy!” the boy screamed. “Tye!” she screamed.
The creature’s hand, coming through the wall, clamped around Andria and pulled her out as she screamed in terror.
Anci clapped her hand over Tye’s mouth and dragged him behind a pillar. Through the large hole in the wall, she saw Andria being dropped into a cage fixed to the creature’s body.
The searchlights turned on and flooded and flashed all around the fifth floor. Anci sheltered Tye from the four powerful claws that groped for more victims.
The pillar behind which Anci and Tai were cowering blocked their thermo radiation from being detected by the creature’s software. Its claws withdrew. It stomped off in search of other prey
“Mommy!” Tye cried. Anci tried to settle him down. “We can’t remain here long, Tye. I need you to be strong for me. We’ll head for the tunnels the ancients used for transport. I need you to be courageous and save your strength for me.”
Young Tye cried and hugged Anci. “I love you, Anci!”
She held him tight. “I love you too, sweetheart. We’ll find Andria when we can, but now we need to run. In about two hours, the swarm will migrate to our side of the river. That will block their sensors and give us a chance to reach the tunnels.” She kissed him on the cheek and hugged him before she tried to rest.

Andria awoke from her state of shock and disbelief. She looked around and realized she was in a cage hanging from the gigantic robot. She saw two thin, worn-out, and bruised men wearing only white loincloths. They had long, grey beards and hair. She saw a dark-skinned, middle-aged woman holding a dehydrated nine-year-old girl who was being comforted by a five-year-old boy.
She also saw a human resistance soldier sitting by a young woman in a weathered burlap dress. The human soldier was wearing a distinctive uniform. “You’re a private in the Volk Nationalist Army, aren’t you?” Andria asked him.
“Why yes, my fair woman. I am a proud soldier among the ranks of the Volk infantry. The Beneficiarius have decimated my countrymen and have captured me.”
Andria shook each time the monster took a step. “The Volk Nationalist forces are far from here. Have you come to link with Brenn’s men?”
“Yes, that was our objective. At least we were instructed to do so until we had spotted those aerial drones and their ground troops. We ad no choice but to engage the enemy early before we could link with Commander Brenn’s friendly forces.”
Andria noticed that the creature had stopped and boarded a barge. The soldier looked outside the bars and saw the island across the river. “They must have a prison for us on the island. Only the Lord of Light knows what they will do with us.”

Two soldiers, from two different periods in world history, live in the present. One is heroic, decent, and somewhat religious. The other is anger-filled, vicious, despotic, and evil.

John Barnsmith was an African American soldier officially listed as missing in action during the Vietnam conflict. Unknown to all, John is accidently awakened from his state of suspended animation, placed there by a mysterious syndicate. Waking on a deserted tropical island, he’s rescued and realizes it’s no longer 1969. He tries to adjust to the modern world in Las Vegas, but struggles. He’s soon summoned for a new mission, boldly risking everything on an adventure into the dangers of time and space.

Baron Dietrech Von Tor was a myth in history. His actions were so terrorizing many historians thought of him as a fantasy figure. Originating from the Prussian line of aristocratic officers, the Baron stormed onto the New World as a leader of mercenaries, called in when the situation mandated an iron fist. After a battle against his enemies of Boston, the Baron’s life, death, and unholy resurrection by a sinister cult drastically altered his path. Now he walks among everyday people in the modern world after a long and secret hibernation, working with terrorists who harbor plans of devastation.

The two men, both possessing the same power and martial arts skills, emerge in the present to engage in a duel over humanity’s fate.

Alexander Von Net spent five years in the Marines and ten years serving in the National Guard both as an infantryman and as a military police officer with the security forces. He was an American football and martial arts athlete. Von Net lives in Boston, Massachusetts.