The Rights of Women in a Democratic Republic 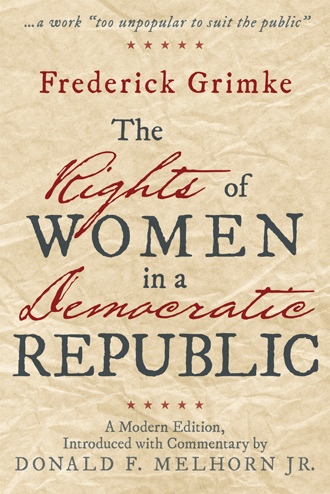 From the Introduction: “A Work Too Unpopular to Suit the Public” “I had no idea I would find it so difficult to get it into circulation,” Sarah Grimké wrote to a friend in the feminist movement, telling of her efforts to find a publisher for her brother Frederick Grimke’s provocative essay, The Rights of Women in a Democratic Republic. Frederick (who spelled their family name without the accent on the last letter) lived in Chillicothe, Ohio. Since his resignation from the Ohio Supreme Court in 1842 he had devoted his life to interests in political and social theory. Self-absorbed and eccentric, a lifelong bachelor, he was famously uncomfortable in female society. But he was immensely proud of his sisters, Sarah and Angelina, whose personal accomplishments in the service of abolitionist and feminist causes inspired his vision of the future of women in America. “This is a question of infinitely more importance than is generally supposed,” his essay began. “The placing of men and women upon precisely the same footing in political society will be one of the greatest revolutions in human affairs since the beginning of society.”

One of the publication prospects Sarah approached rejected the essay “because it would make so small a book.” But Sarah “did not want it in a pamphlet, because pamphlets are despised, and because it could not in that form have circulation beyond our own circle.” So she submitted it to Putnam’s, a magazine with a general circulation that later became Atlantic Monthly. That submission brought another rejection: the magazine’s editors found the essay’s message “too unpopular to suit the public.”

Sarah then called on an influential supporter, “one of the first to espouse our cause,” who had given the women’s rights movement sympathetic coverage in his New York Tribune. But Horace Greeley told her that “so much had already been printed” about the movement that “nothing new could be said.” Recounting their meeting in the same letter to her friend, Sarah said she thought “poor Mr. Greeley” was “worn out with espousing Reforms.” Whether he actually read Rights of Women is unknown. But Sarah did not give up easily. She was “discouraged,” she told her friend Harriot Hunt, “but determined to persevere until I get it into some Periodical.” Sarah’s letter is dated “February 1st”; an internal reference and other correspondence reveals the year, 1857. . . . But efforts to get The Rights of Women into print would not succeed in [Frederick's] lifetime.

The obstacle was the essay’s conclusion. Frederick went beyond asserting that women were inherently as intelligent as men and fully equal in their in potential for intellectual development – a claim beginning to gain acceptance even beyond feminist circles. It was in forecasting the consequence of women’s realizing this potential that the work was radical. “[A] revolution is set on foot,” Frederick wrote, “which although destined to be the most gradual as well as the most searching of all revolutions, no arm will have power to arrest.” He predicted that American women – even married women with children – would eventually enter into all of the occupations and professions in which men engaged. Realization of this prediction would be gradual. “If society does actually undergo this change, it will not be in a single precipitous leap,” he cautioned. “It will be after a long preparation for this new state of being. The present generation will only witness the discussion of it; the next will stop to ponder upon it; the third will probably enter upon the experiment of it.”

From “Free Institutions 2d: on Women’s Rights – an Awkward Silence” Frederick’s sympathetic interest in the women’s rights movement as it gathered momentum in the early 1850's, his pride in Angelina’s role in determining the movement’s organizational structure, and his awareness of the effectiveness by which its goals were being pursued in Ohio through sophisticated political activity, all make it remarkable that the second edition of his treatise, Free Institutions, published in 1856, again contains no mention of women’s claim to be next in line for admission to full political equality, but simply repeated the first edition's characterization of the franchise’s restriction to males as “a mere abstract limitation.” The logical, plausible and timely application to American women of the insight Frederick had articulated in the first edition is thus notably missing from Free Institutions 2d. We now know that he chose instead to make that application in a separate work, his Rights of Women essay, enlisting Sarah as his literary agent to find a publisher.

This choice is not surprising. Demands for women’s access to the ballot and entry into occupations outside the home traditionally reserved for males were relentlessly lampooned in the 1850’s popular press, whose cartoonists delighted in depicting women wearing the distinctively feminist dress style of short skirt and pantaloons attributed to Amelia Bloomer, publisher of The Lily, an organ of the women’s rights movement. Although the New York Tribune and other leading city newspapers occasionally took serious notice of the cause The Lily supported, “Bloomers” were gleefully seized upon by the tabloids as an image for stereotypical portrayals of women’s rights advocates, which misrepresented as their claimed insistence, that women should participate in “men’s” occupations not only to the same extent, but with complete similarity of workplace lifestyle, social customs, and behavior. The result was a public relations disaster for the movement. The cartoonists, as Kathryn Kohrs Campbell wrote, were “successful in ridiculing the Bloomer costume to death.” Gary Bunker put it succinctly in describing the power of their relentless derision: its victims “had two alternatives. They could wait out the storm or protest against the misrepresentation.” But Frederick could have done neither.

Frederick Grimke is the last person anyone – including scholars who have recounted the careers of his two sisters Sarah and Angelina in the nineteenth century feminist movement – would have suspected of having a sympathetic interest in women’s rights. An intellectual with quietly held opinions on secession and slavery reflecting his antebellum southern heritage, who spent the last two decades of his life pursuing interests in political theory, he was famous among fellow townsmen for his aversion to female company. But his affection for his sisters and his admiration for what they had achieved in their public careers inspired this essay, “The Rights of Women in a Democratic Republic,” in which he made a remarkably prescient forecast of the vocational future of American women – including married women with children – once given access to higher education.

The essay was nearly lost. Grimke himself had doubts about it, and after appealing to Sarah to help him resolve them, died in 1863 leaving an instruction that it be omitted from the edition of all his writings which his executor published in 1871, in a cheaply fabricated volume with very small distribution. Melhorn’s Epilogue reveals who the executor was, and how he came to disobey the order for the essay’s suppression.

With new research findings revealing Grimke’s influence on his sister Sarah’s writings, and the discovery of feminist issues as an undergraduate debate topic at Yale where he was educated, Melhorn’s Commentary broadens the scope of the history of women’s rights in America.

Donald F. Melhorn Jr. is a lawyer “who practices history without a license,” pursuing encounters with curiosities others have never reported on. Free of the urgencies of getting published that typify an academic career, he pursues research efforts that might not turn up anything significant – and shares the pleasure when they do.