Heaven in a Mirror 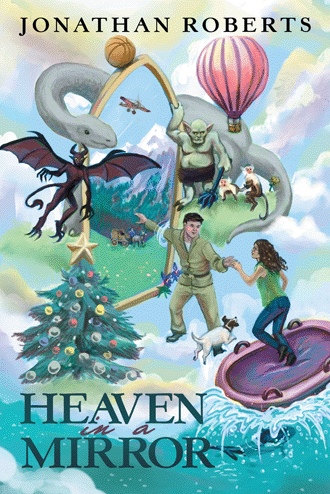 She planned to go to the best university she could find for forensic science. She knew eventually she would meet someone and hopefully fall in love and marry but it seemed so unlikely to her at that time since she hadn’t even had her first kiss. Her loneliness for someone to share her time with and to fall in love with became even more upsetting to her as she watched her 16 year old sister enjoy the attentions of boys since the age of 13. In fact her sister had her newest boyfriend coming over for Christmas Eve dinner. She became even more depressed at the thought that she had never even been on a date with a boy. “What’s wrong with me? So I’m not a blonde and not a swimsuit model. Why can’t I attract a boy like my sister?” She began to think about Christmas and realized it wasn’t so special after all unless you were a kid. “I wish the Christmas holiday would never come,” she said aloud. “How do we even know God exists and was born on that day? It’s all a fabrication for companies to make money,” she continued aloud.

Alexi remembered that Christmas Eve she wore her dark blue jeans, her light purple top and purple Australian boots from Uggs. She also had on snowflake ear rings. She always thought her ear rings were a nice touch for her. She had a jewelry box full of all kinds of ear rings. She wore her long hair down over her shoulders that night. She loved the way she looked on that Christmas Eve but she said to herself, “Big deal, no one but me will say I look good. I could be wearing a yellow raincoat and no one will notice.” As she sat in the living room, looking at the Christmas tree, she found herself so lonely that when the dog, Shelly, came and nudged her hand, she pushed her away, something she never did. Waiting for her mom and dad to get home from work and her sister to arrive with her new boyfriend was more than she could bear at that moment. She turned the television on and there was a Christmas movie just ending and the girl and the guy fell in love. “Great,” she thought.

It was snowing that Christmas Eve in 2014. Alexi went to the living room window that overlooked the front driveway. Snow had always been one of her delights and once, when she was 12 years old, she tried to collect snowflakes to see if they were actually all different but they melted as fast as she could catch them. She smiled at the thought of her silliness doing that as she looked out the living room window. Sometimes her loneliness pushed her to a dangerous precipice where she had suicidal thoughts. She remembered looking at her father’s razor in the bathroom once and thought, “How easy it would be to just end it.” Lucky for Alexi, these thoughts were few and she never acted upon them. “Well, back to the loneliness,” she said aloud as she turned away from the window. She walked back to the couch, sat down and again admired the Christmas tree, full of ornaments and lights. It seemed to be more beautiful than normal. As she stared at the tree she thought she could see a face in one of the large silver balls her mom had hung on the bottom of the tree. She moved closer to get a better look and there was a smiling face in the silver ball, looking back at her. It was a cute young man and he said, “I would notice if you had a yellow raincoat on.” Then he just disappeared.

Alexi is an elderly woman, lying in a hospital bed on Christmas Eve, 2085, nearing the end of her life. As her pain medication causes her to drift, she thinks back to the true love she has never forgotten, even though those memories are more than seventy years old.

In 2014, Alexi is eighteen, and although she doesn’t know it, this Christmas will bring magic. She discovers she is able to walk through her mirror into another world, where she travels to a placed called Azure City and meets a young man named Ethan. She learns that this is, in fact, a gateway to paradise--a place for people to encounter their soul mates before moving on to heaven. Alexi spends seven days with Ethan--visiting a water park, flying in a hot air balloon, riding a dog sled pulled by rabbits, and so much more. She also finds that living a good life on earth will bring her soul back to paradise after death--to spend eternity with her soul mate.

In this fantasy novel, a young woman visits a spiritual realm at the age of eighteen and discovers that she has a soul mate waiting for her in heaven.

Jonathan Roberts has written financial white papers and corporate research reports for thirty-five years. He has also written poetry and songs and has played and sung with a pop group in North Jersey for many years. He enjoys traveling and current lives with his white Jack Russell, Jilly Bean, in Pennsylvania.