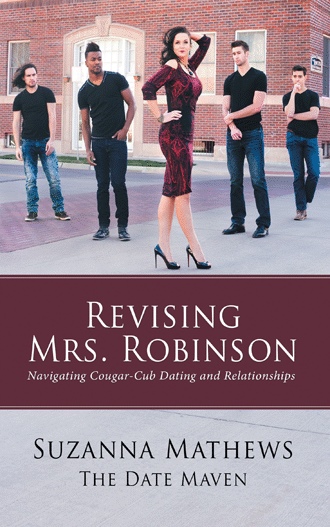 The plane had just landed in Denver. It was a full flight and the passengers didn’t hesitate a moment to unbuckle their seatbelts and jump to their feet to collect their bags from the overhead bins. Except the young man sitting next to me. His body had been slumped forward, barely moving during the nearly two-hour flight. When the beverage cart had come by, he hadn’t even looked up.

Now, his 20-something buddies – who had been seated across the aisle, and in the seat behind him – prodded him. He begrudgingly came to life, as if he might never recover from whatever his weekend in Las Vegas had entailed. The guys lamented having to return to work the next day, that their weekend of fun was over. They reveled in the fresh memory of their raucous weekend. Then they turned on the most exhausted member of their party: “Dude,” his friends joshed. “You ditched us for a woman old enough to be your mother!”

This book is written for all the women who’ve heard – or fear hearing – the words: “You’re old enough to be his mother.”

During the final stretch of researching and writing this book, I was driving along in my car listening to the radio when the song that was on concluded and the DJ came on to transition to the commercial break. Top 40 stations often dabble in celebrity gossip as “filler” as they move in and out of the programming blocks, and this DJ reported that Jennifer Lopez and her backup dancer boyfriend Caspar Smart had broken up. She was in her early 40s; he was 26. The female DJ’s nasally reassurance was hasty: “That’s OK, he’s too young for her anyway!”

While we don’t always expect insightful, informed cultural commentary from radio personalities, her squeaky dismissal got under my skin for being both too easy and cliché and for being, well, prejudiced. I couldn’t restrain myself from an eye roll.

What if she had been talking about a different couple? What if, instead of the word young, we substituted another adjective? If she had said he was too black for her, too gay for her, too disabled for her, too rich for her, too poor for her, or anything of that kind, the radio station hot line would have lit up like a Christmas tree. But no one’s pulse will quicken or temper will flare (except maybe mine) over “he’s too young for her” because that statement reflects a culturally acceptable prejudice: that people should be in love with people who are approximately their same age. And that we (the public) know what’s good for celebrities. (Also an outrageous assumption, if you think about it.)

Labels like these reflect varying degrees of judgment and even disdain. Many of them simply express the cognitive dissonance (the mental conflict, confusion, or disconnect) the onlooker experiences when encountering the older woman/younger man couple. But none has had quite the cultural sticking-power as the term “cougar.”

If you’ve picked up this book, you likely already know – or have some idea – what a “cougar” and a “cub” are. The bigger question for someone involved in such a relationship is how should they navigate the special challenges and opportunities of their relationship? It was a question I found myself faced with nearly five years ago when, shortly after filing for divorce, I became the object of unexpected attention from men in their mid-20’s. It was thrilling, puzzling, and a wee bit intimidating.

Was I the only woman this was happening to? (No, as it turns out.)

Where was the “How To” manual for how to respond? As a dating coach, my bookshelves were lined with dating advice books and self-help relationship books. But not a one said anything about relationships with younger men. Or about how to re-enter a dating market that has always favored youth and beauty as an aging-almost-single woman.

This lack of attention (and the fact that the attention which is given tends to be full of shallow sexual hype and salaciousness) has prompted me to seek to fill this void. It is a void first filled by information, empowerment, and self-acceptance.

To gain a better understanding of the challenges of intergenerational relationships, I have turned to two distinct sources for information:

1. The scholarship. You will notice a number of academic and expert sources from the fields of anthropology, biology, communications theory, psychology, neuroscience, and the social sciences cited in the coming pages.

2. The real-life women and men who have experienced these relationships. Through numerous personal interview, they have graciously allowed me to share their stories, and I have changed their names to protect their privacy.

So, if you have ever been the older woman in an intergenerational relationship and felt awkward, confused, embarrassed, ashamed, or condemned . . . This book is for you.

Have you ever been the older woman in an intergenerational relationship that didn’t blossom as fully as it could have because of social stigma? This book is for you.

Have you ever been the older woman in an intergenerational relationship and found your character, your patience, and your beliefs about love put to the test? This book is for you.

Thank you for joining me on this journey.

In this modern era of dating, opportunities abound for older women and younger men to find each other. But those women dating younger men must be proactive about managing the doubt-filled self-talk and the outside commentary that could derail their romance.

Revising Mrs. Robinson offers an examination of the personal and social responses to relationships between older women and younger men. Author Suzanna Mathews explores the term cougar as a cultural phenomenon and considers what draws cougars and cubs together. She also provides advice for managing the unique challenges of an intergenerational relationship. Most of all, Mathews tells middle-aged women how to be honest with themselves and feel empowered to pursue whatever relationship they choose, regardless of age difference, and armed for the cultural critique that often accompanies any nontraditional relationship.

This practical guide seeks to assist women involved with or interested in relationships with younger men, presenting methods for dealing with both external and internal obstacles.

Suzanna Mathews is a dating expert specializing in flirting, first-impression management, soulful-spiritual relationships, and gender dynamics. Known as the Date Maven, she is the Midwest’s premier dating coach and matchmaker and lives in Wichita, Kansas, where she is also a speaker, a wedding officiant, and image consultant and works as a voice-over and on-camera actress for industrial and commercial clients. She has a BA in communication studies and an MA in theater/drama.

Her blog is found at www.thedatemaven.com. This is her first book.