The Secret Door of Osiris 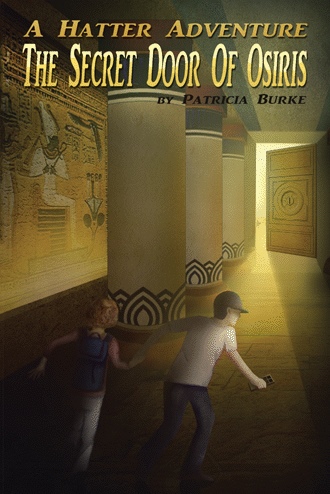 When you are young and find yourself caught up in almost unbelievable, strange adventure, it might be wise to forget it. As the years pass, it would become more like a distant memory and eventually forgotten. However, for Jonathan Hatter, suppressed memories have a way of popping up again proving a most unbelievable, strange adventure did happen and even more bizarre, is connected to a mysterious family heritage.

He drilled his pencil into the paper forming a large, black dot on the last sentence, then wrote in the upper left corner of his paper.

"THE AVENGER" in large bold letters

All his teachers called him Jonathan but his friends called him Jack, which he preferred––plain and simple. "I'm done," he said throwing the pencil down and wiggling his numb fingers. Two hours of wasted time to finish this unjust assignment and he couldn't think of another word to write. Exhausted, he sprawled across the desk and stared into the fireplace at the slow burning logs. He got up, stretched his arms over his head, and vigorously scratched his head causing his sandy brown hair to fly everywhere. Jack was nine years old but tall for his age. His hazel eyes burned as he rubbed them with his fists.

"Total overload," he mumbled falling back into the chair and spinning it around scanning the walls in his father's study. Dark, wooden bookshelves lined the walls. William Hatter, Jack's dad, acquired a vast collection of books from all over the world. He was an architect, but collecting old, rare books was a hobby. Jack stared at the shelves puzzled at the way his father organized the books, first by country, then by the century. His father told him it was easier to locate the information he needed. Jack didn't understand and honestly didn't care. Computers and video games were more his style, books...not so much. But the most important thing in the room was the old, familiar, overstuffed chair. They called it the story chair. They would nestle in the chair and listen to their father's mesmerizing stories about important people and places. They both agreed their father was an excellent storyteller. He described the story characters with such detail, Jack felt like he knew them––the way they looked, their personal habits and secrets about their past. He enjoyed stories filled with excitement and adventure like the swashbuckling escapades of Black Beard the Pirate prowling the seas for ships carrying gold and treasures then narrowly escaping the clutches of the English navy. His favorite story was the wild adventures of Robin Hood and his Merry Men dodging the slings and arrows of the Sheriff of Nottingham and disappearing into their secret hideaway in Sherwood Forest. Jack kicked the desk again and spun the chair around surveying the study. It stopped in front of what he would describe as the strangest thing in the room...a hat rack but not like any hat rack, he had ever seen. It reminded him of a misplaced tree growing out of the far corner of the study. The trunk, carved out of rough oak, stood at least 10 feet tall. Gnarly branches twisted and turned up toward the ceiling not quite reaching the second landing and on at the end of each branch hung a 'hat'. Jack stared at the hats. They were all old and from their appearance, well worn. A black, three sided hat hung from one of the higher branches. The thick gold braid once proudly displayed across the top dangled limply over a military emblem. On the next branch, hung a straw sombrero with a faded red and green bandana tied around the brim. Each year, the collection of hats grew. Neither he nor is sister understood why their father collected hats. Possibly, because their last name was Hatter and their family were milliners or hat makers many years ago. Regardless of family history, the hats were off limits. The two of them were never to touch them, and their father made the rule quite clear to both of them. Jack didn't realize just how special they were, but he was soon to find out. Jack admired the green boat-shaped hat with a tattered, gray turkey feather. Who knows, Robin Hood himself might have owned it, he thought. He spun the chair in a circle, staring at the collection and sizing up what he would have to do to reach the green hat.

"Wearing one hat wouldn't be so bad," he muttered, completely blocking out his father's rule from his head. What if he did try one on, he would be careful. What's the big deal, he convinced himself.

Eagerly, he climbed on the arm of the story chair. Carefully balancing himself, he stretched his arm out to reach the boat-shaped hat. Determined, Jack climbed on the back of the chair. Steadying himself, he lunged for the hat. His fingers barely touched one end of it. With his arms waving in the air like two airplane propellers, he lost his balance and fell to the floor with a THUD. Everything went black. A few minutes passed before Jack regained his senses and pulled himself up on his elbows. He looked up. The branch was empty. The hat was gone. He crawled toward the desk––not there. Then he saw it nestled in the old story chair. Without thinking of the consequences, he scrambled to the chair and scooped up the hat. The real Robin Hood would have worn this hat. "I'll try it on once and put it right back. No harm in that." He debated for a moment then without another thought, slipped the boat-shaped hat on his head. "Off to Sherwood Forrest," he shouted joyfully and charged across the room. Suddenly, his legs started to shake. He felt dizzy and the room began to spin. The bookshelves whirled around him and his stomach felt nauseous. His eyes rolled back in his head and just before he hit the floor, something grabbed his arm. For the second time this evening, everything went black.

When Jack opened his eyes, his whole body was limp. He was lying in the middle of a dirt path, surrounded by tall trees. Beams of sunlight pierced through a thick blanket of foliage like silver swords. Rambling shrubs and bushes stretched along an expansive, seemingly endless road.

"Wha...what happened? Where am I?" He said focusing on the surroundings. "Am I really in Sherwood Forest?"

After their father’s disappearance, Jonathan Hatter and his sister Jillian are sent on vacation to visit their grandmother, Nora. While there, they learn something incredible. Apparently, the hats in their family shop are not just for fashion. They are a means of time travel, and it turns out Jonathan and Jillian are related to a community of Time Travelers known as “The Hatters.”

Their real adventure begins with an article in the local San Francisco newspaper, claiming that Egyptian artifacts—including the crown of Pharaoh Seti—are missing from a highly secure area of the British Museum. The brave, young siblings are now on the hunt for Chi, a despicable Hatter who has fallen from the ranks and stolen the Egyptian items in question.

Chi has used the secret Door of Osiris to transport the stolen artifacts, but while searching for Chi, Jillian slips on the crown of Aset and is transported back to 1300 BC Egypt. It’s up to Jonathan to go back in time, help his sister, and return the pilfered treasures. First, they must battle giant crocodiles and colossal stone guardians. They will meet Osiris and the mystical goddess Aset as they weave in and out of grand palaces, dungeons, and even the underworld.

Patricia Burke lives in Northern California. She graduated from the University of La Verne and worked as an accountant for many years. Now retired, she wants to continue the writing passion that started many years ago.