Oliver and the Great Acorn Theft 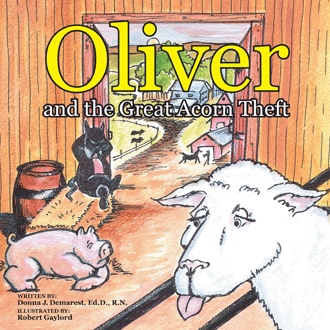 Standing tall and important looking in Farmer Pickeral’s largest pasture was Oliver. Oliver was an oak tree – the most majestic tree that anyone had ever seen. His branches reached out and up so high that you would have to go up in an airplane to see his top! Oliver was surrounded by many of his children who had grown from tiny acorn seedlings that would soon become oak trees. Because he was so generous, Oliver also dropped enough acorn seeds each year to feed many of the surrounding animals, especially the squirrels and chipmunks. He also offered his great branches and trunk as a home for many animals and birds. Even farmer Pickeral’s large farm yard animals used Oliver’s rough bark to rub against when they needed to scratch their itchy parts. Oliver’s full leafy branches provided the animals with protection from the summer sun and rain and served as a warm companion throughout the snow and wind of the long, cold winter seasons. Oliver was a regular neighborhood. Bert and Bertie Crow nested each year in Oliver’s high branches. Fall and winter birds nested in him, giving way in the spring to summer bird families. Oliver was especially popular with the blue bird clan who seemed to arrive in large numbers right around the fall harvest of acorns. Sammy the Owl lived on a branch about half way up the tree and Lottie and Leonard Squirrel and their large family shared a nest just a few branches away. Wilbur Possum had lived in Oliver all of his life and liked to hang upside down by his tail in the tree thinking and pondering about this and that. Hilda queen bee and her very busy hive occupied a hollow part of the tree closer to the bottom. Other neighbors were Sammy Tree Frog who was a quiet fellow until the sun went down and then he began his very noisy, croaking serenade and Carl and Clara Chipmunk and their children shared the deep holes in and around Oliver’s huge root system.

The Squirrel family and their neighbors are all set for winter in Farmer Ebineezer Pickeral’s meadow. Thanks to Oliver the oak tree, they have shelter, and they’ve gathered plenty of acorns to get them through the winter. Or so they thought.

Oliver and the Great Acorn Theft, by author Donna J. Demarest, EdD, RN, tells the story of how Oliver helps the animals on Farmer Ebineezer Pickeral’s farm. His branches provide a home for animals and birds to live in harmony and with good will toward each other, and keep them cool in summer and warm in winter. The peaceful community is shattered when the acorn stash the Squirrel family has so patiently hidden away for winter is gone. They turn to Oliver for wisdom and guidance. With his help, the neighborhood works to discover the culprit--who learns an important lesson about living in a community where respect and caring for each other is expected.

Although told through the eyes of animals and a tree, the lessons learned in Oliver and the Great Acorn Theft apply to people as well. The ability to live and work with others is an important part of growing up.

Dr. Demarest is a retired Nurse Educator who has frequently utilized story telling as an important communication technique in the education of student nurses. She firmly believes that age appropriate stories with a message can explore and clarify complex issues such as the identification and internalization of cultural and social norms when delivered through the non-judgemental voices of story characters.