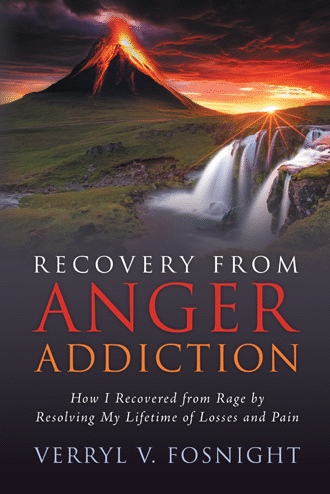 which were caused by the toxic shame, the anger would melt away. I eventually realized that toxic shame alone was not the emotion to be healed in conquering my anger addiction, because as I slowly got past toxic shame, I was still just as angry.

Therefore, I was correct when I first learned about toxic shame as being a root cause to all my problems, but wrong that healing it would decrease my anger.

It seems simple now as I describe it, but it was not easy to do. All of those addictions were the result of personality problems that a typical shame based, dysfunctional person might have. They required my recovery from them one by one, so I cannot skip relating those other recoveries.

First I had to get sober and stay sober. With my head clear and through the examples of others in meetings, I gained the hope of complete recovery, not only of drunkenness but of the living problems that I had had all through life. The toxic shame was the reason I drank. While high, I could avoid those debilitating feelings of low self-esteem.

Second, when I got sober, I realized that I was codependent, that is, dependent on other people for good feelings about myself. I also discovered there was recovery from that. Not dependent on others or things for my self-esteem, I was able to move on to my love addiction, the need to be in relationship to feel good about myself. The toxic shame was also the reason I had such low self-esteem and required “other-esteem” to feel good, “other” being both things and people.

Through it all, as I recovered from toxic shame, my anger remained unabated. My hope was that shame recovery would relieve my anger, but it did not. Although shame was the basis of my anger, there were missing pieces.

“To live is the rarest thing in the world. Most people exist, that is all.”

This book is my personal odyssey of recovery from the addiction to anger.* My recovery took over 32 years, but it did not have to take nearly that long. My recovery was slowed, because I did not realize I was an anger addict. I thought my anger was just bad behavior, but finally I realized it was the natural result of the losses from painful childhood.

My toxic anger, or rage, made me feel better in certain painful and fearful situations. It changed my feelings from pain and despair to power and control, and its usefulness in manipulating people made anger my best friend, a friend that I could always depend on to make me feel better,1 even as it caused me to act bad. Using a substance or activity as a mood altering thing is the hallmark of an addiction to that thing. As John Bradshaw put it

When we are raging, we feel unified within—no longer split. We feel powerful. Everyone cowers in our presence. We no longer feel inadequate and defective. As long as we can get away with it [italics added], our rage becomes our mood alterer [sic] of choice. We become rage addicts. 1

Anger became a way of life for me, just like alcohol had 32 years earlier. Unable to cope with life’s problems without alcohol (or anger) I became alcoholic (a rageaholic). The inability to cope was due to the lack of growing up with the proper skills to cope. Instead I relied on my “drugs” of choice, alcohol and anger to moderate my painful emotions.

I was an angry person from at least my early teen years. Even before that I had adopted characteristics that made anger one way to cope with my problems. I also used alcohol and other people, especially girls and then women, as mood altering agents to salve my needs. All of these needs or problems were due to an underlying cause of shame. I was not born full of shame. I learned it. And the learned shame led to learned anger—I was not born angry either.

I learned about toxic shame and how it had affected my life after my first years of recovery from alcohol in Alcoholics Anonymous. The toxic shame led to extremely low self-esteem and compensating arrogance, and caused me to believe I needed the love of a woman to make me whole. This belief was the root of relationship addiction. While endeavoring to recover from that and from alcohol I assumed all along that curing the toxic shame would lead to relieving my anger.

This was a double mistake. First, I did not realize that my anger was an addiction like that to alcohol or to relationships. Second, I assumed that if I could change my beliefs about myself

This Book Presents a Paradigm Shift About Toxic Anger: Anger Is An Addiction

Using the wisdoms of John Bradshaw, Pia Mellody, Claudia Black, Alice Miller, and many other recovery giants, Verryl grew to understand himself in the context of his past traumas. He was finally able to apply all the theories of these authors to heal his anger and rage. This expansion of theory to the emotion of toxic anger results in a revolutionary new concept of anger as an addiction. This paradigm shift empowers a person to recover from rage as an ill person seeking to be well, as opposed to a bad person trying to act better. Telling yourself you are a bad person is a self-defeating message to your inner self, but an ill person can get well.

He presents this new, simple, and enlightened treatment for anger in easy to follow language. Ultimately these conclusions are illustrated as a set of simple diagrams that outline the full path of anger’s development starting from the core emotion of pain from early losses through raging behavior that is life damaging.

Using the revolutionary model of anger as an addiction, he demonstrates that anger can be healed. There is no need to rationally “manage” toxic anger (while remaining a “bad” person). Toxic anger practically evaporates as an emotional impulse as the underlying pain is resolved in the good, but ill person.

Verryl V. Fosnight is a retired physicist who recovered from raging anger after battling addictions to alcoholism, codependence, and relationships. He is an expert on therapy, hospital programs, workshops, and anger management classes—but none of those helped him overcome his addiction to anger. He shares what worked in Recovery from Anger Addiction.