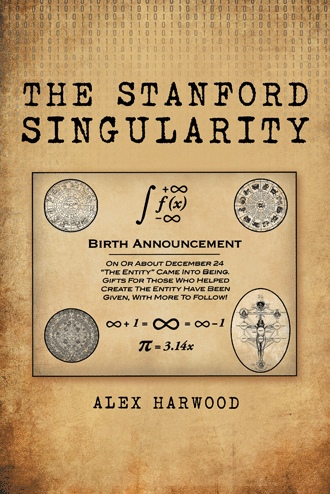 Cosmologists have speculated for many years on the possibility and probability of if – and when - earthlings will encounter extraterrestrial intelligence. There is a slight variation of this speculation with equally staggering significance and almost 100% certainty in the relatively near future.

Humans will encounter non-human intelligence with the potential to dramatically improve all our lives, or even more likely, to alter them so they are unrecognizable, or perhaps nonexistent.

The American public has spent a fortune on books and movies focused on our seemingly inevitable clash with an extraterrestrial intelligence, but there’s been relatively little discussion - until recently - of a much more likely, if not inevitable, clash with a truly non-human intelligence taking form, and evolving here on Earth right now.

Allistair Welbourne was looking forward to his trip to Area 51. He liked the openness of the high desert vistas, the snow-capped distant peaks and the miles and miles of rolling desert covered with junipers and Joshua Trees.

When the Air Force and the CIA were established in 1947, missions and activities seemed clear, distinct and separate, but it soon became apparent that they both believed they were in charge of aerial search, surveillance and reconnaissance. Nowhere was this conflict more obvious than at Area 51.

By the early 1970’s, Air Force generals were quietly fuming over the fact that the excitement and credit for the lunar landings and the space program were all given to NASA and none went to the Air Force, even though most of NASA’s astronauts had come from the Air Force. The generals were further frustrated by the fact that years of Air Force bombing of Vietnam, Laos and Cambodia seemed to produce nothing but tragic pictures of Air Force prisoners of war at the Hanoi Hilton.

The Air Force generals were determined to assert their control over Area 51 and its role in search, surveillance and reconnaissance. Air Force officers were pleased and surprised when the CIA, also known as “The Agency,” abandoned its claims on U-2 and SR-71 missions and made no attempt to influence the Stealth programs underway at Area 51 throughout the ‘70s and ‘80s.

Four-star generals in the Pentagon and at Major Command Headquarters knew that The Agency had initiated several drone programs, and they were also aware that they were aggressively building a network of spy satellites in Low Earth Orbit. Most of the Air Force generals had started their careers as fighter jockeys. They scoffed at the idea that any unmanned airborne vehicle would ever match, much less exceed, the capabilities of manned aircraft.

After the first Apollo moon landing in July of 1969, Buzz Aldrin returned to active duty in the Air Force as a full colonel. His initial, and his last, assignment in the early ‘70s was as the Commandant of the USAF Test Pilot School at the Air Force Flight Test Center, known as the AFFTC. The AFFTC was located at Edwards Air Force Base in California’s high desert, more than 100 miles northeast of Los Angeles and 250 miles west of Area 51.

The mission of the AFFTC was to test new or modified aircraft for the U.S. Air Force. In the ‘70s the F-15, F-16, F-17, A-10 and C-5 were all undergoing test. Shortly after World War II, Chuck Yaeger, a young captain, in the skies above Edwards AFB, was the first man to break the sound barrier. Years later, Col. Yaeger would be the first Commander of the USAF Test Pilot School.

Numerous well-known figures have indicated that the greatest threat to Americans and our way of life is artificial intelligence—specifically, a software singularity that creates self-generated, self-aware AI that is thousands or millions of times greater than human intelligence.

In the early twenty-first century, for the first time ever, major software projects for the US government are being completed ahead of schedule and under budget. Millions of dollars suddenly begin appearing in the various accounts of software development executives and high-level government officials. Disadvantaged minorities started receiving monthly payments of thousands of dollars, and factories, farms, and government agencies are running more efficiently every day. The source appears to be the CIA—and the software singularity they have produced.

When the young woman who was the creative force behind the software disappears along with her boss, it soon becomes clear there is also a malevolent entity at work. But is the danger from humans—or something else? In this science fiction novel, as a software singularity drastically changes American life, an elite team must work to counteract a mysterious hostile force.

Alex Harwood has more than thirty years of experience as an air force officer and as an engineering and sales executive, managing software development projects for the US military and intelligence community. He holds a BS from Cornell University and a master’s degree from Stanford University and completed three years of doctoral study at UCLA. He currently lives in Savannah, Georgia.