The Adventures of Mr. D 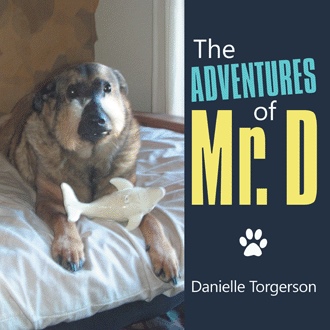 Hi, my name is Danielle Torgerson of Killeen, Tx and this is a true story of how my love for a puppy grew into a life changing story for us both.

The summer of 2007 I was working as a vet technician and it was a crazy day...I had worked for this vet for appox. 3 years and had seen some bad things...but nothing could have prepared me for this days events.

I was working with a client and her animal in one of the three exam rooms and was finishing up...when I had an unusual urge to go to another room down the hallway. This had never happened to me before and was totally against the clinic rules and policy. As I was pulled by this strange force to the room down the hall. I could hear the sobs of pain and moans of which I’ve never heard before. When I glanced inside the room, I saw what appeared to be a puppy on the exam table. He was in horrific pain and was also scared out of his mind. The man who owned him had brought him to the clinic claiming that the pup had been “stung” by bees, but the overwhelming stench of gasoline and burnt flesh and hair told a different story. “Someone” had poured gasoline on this baby and lit him on fire...Burning off his eyelids, melting his ears and lips, melting all of the hair off his head, down to the skull and all of the hair to his shoulders. This poor baby was here to be euthanized. I just cried and cried and could not imagine what kind of pain he was suffering through. Then my tears of pain turned to tears of anger! Who could do such a cruel act? What kind of an animal does this to another innocent life? I could not let this baby’s life be extinguished before he had known the single joy that every dog should know. I wondered if he could be saved? And if he could ever have a life of normal after what he had gone through. Could he ever have a bed of his own? Go for walks down my street? Would it ever be possible that this puppy could experience love and be able to show love back? Well, “I don’t know” said the Vet, “I just don’t know if he’s worth saving, he’s in pretty bad shape and treatment if it can be carried out will be thousands of dollars”.

That was all I needed to hear, besides, I had my mind made up, that puppy was going home with me. I told the man who brought the puppy in to sign over custody of the puppy to me. My boss did not want to get involved and would not call the police. I then called the office of Dr. Elaine Caplan of Austin and we went to see her for a surgical consult to see what could be done to put him back together again. It was decided that he needed major skin graft surgery to reconstruct the ears and mouth and he had hair implanted around his face, nose and head, back and shoulders and soon his condition improved, he began to function on his own.

I named him D’Artagnan (who served Louis XIV as Captain of the Musketeers of the Guard), but I called him Mr. D for short. This was just the beginning of what was to come. And in a matter of days I brought Mr. D home to meet the rest of my furball crew.

Time passed and Mr. D had grown into a large and beautiful dog and earned quite the reputation for his generous nature. “He lets the cats sleep with him and shares food with them all”. But I will tell you, he has earned his stripes in protecting his momma. On the street there have been those that regard his as beast. He is kinda scary looking at first, like a werewolf, because of all of the skin grafts, but he’s just an adorable angel. And I know that because of me saving his life, that he returned the favor and helped save mine.

You see, in 2010 I was in a terrible motorcycle accident, I tried to avoid a collision with a car that came speeding through my neighborhood and came flying around the corner, it would have hit me, but I dumped the bike and hit a curb. I went airborne with the bike landing partially on top of me. Regretfully, I was not wearing a helmet and it fractured my skull. I was at the brink of death door and hat to be life flighted to a hospital with a trauma center where I stayed in a coma for 12 days without any brain activity. My will stated that was and wanted to be an organ donor, so arrangements were made that on day 13 I would be taken off of the resperator and be unplugged, so that my organ could hopefully give life to others. But while I was in that coma, I could hear voices far away and I saw my precious Mr. D, who I knew was missing his momma. When day 13 arrived...I could hear a man who turned out to be a priest at my bedside. He was reading me my last rights and I could hear him as he prayed. Then a miracle happened, I just woke up, like I had just been asleep and my first word I said was “Mr. D”. As weeks turned into month, my rehabilitation to learn to walk, speak and function dragged on. But the motivation to be back with Mr. D and my other fur babies drove me forward to show these doctors that said I would be wheelchair bound for life a thing or two. And I did show them, that not only is God great, He is our Healer and The Great Physician and still works miracles today but that our souls and ability to recover from great tragedies is in us. Now fully recovered my greatest hope is that this story will inspire people of all ages to not ever give up on yourself or your loved ones and to show people the importance of rescuing animals from shelters instead of buying animals through puppy farms. Because you will find, that the love and bond between yourself and an animal can be one that is selfless and enduring and can never be broken. I hope you can laugh and cry as we share our experiences and lives with you. And it is my prayer, that they will brighten some of your darkest days.

These are the true stories of some of the warmest, heartfelt moments between humanity and beasts. It will truly brighten your day and leave you laughing and crying.

Danielle Torgerson is a retired veterinary technician. She has always been an animal advocate—speaking up for those without voice. Her main goal is to bring a more focused awareness to the importance of pet and human bonds.