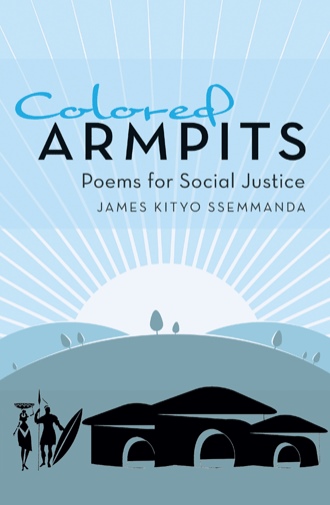 This book is divided into three parts. The First one is called The Mzungu. This is a jocular term commonly used in East Africa to refer to White people. Here, the African seems to be judgmental on the outlandishness of the Mzungu. He ridicules the Mzungu only to strangely imitate him. Much as the matter is shameful to the other Africans, the observable patterns give room for contemplation, as both the Mzungu and the African share their commonalities in the second part of the book called The Armpits. In the last part of the book, The African African, the independence of the otherwise docile being is tested. On the whole, Colored Armpits by James Kityo Ssemmanda creates diverse Social justice impressions perceived from society, ranging from abuse, double standards, debauchery to racial discrimination.

And pay is time; this he knew,

For the concept of time

Native Ugandan James Kityo Ssemmanda is all too familiar with the fragility of humanity. In his debut collection of poetry, he speaks to the human condition, explores racial issues, and shines a light on social injustices.

Ssemmanda presents thought-provoking verse in three sections, the first of which explores and sometimes judges the Mzungu—a term commonly used in East Africa that refers to white people. While encouraging contemplation, Ssemmanda also shares a compilation of wide-ranging poems that not only highlight the differences and commonalities between the Mzungu and Africans, but also examine life in a busy world, the importance of man’s word, and the price for wishing to be like Mandela.

Colored Armpits offers a powerful volume of poetry that draws attention to diverse social justice issues and encourages reflection among all who desire change in a complicated world.

James Kityo was born in Uganda. After studying at Leeds, United Kingdom, he worked in Uganda to help communities affected by HIV and AIDS. He is a beneficiary of the International Ford Fellowship for leadership in social justice, a recipient of the Phillips Livable Cities Award, and in 2012, was recognized by the Hrant Dink Foundation as an inspiration for humanity.