Percival, a Mouse in the President’s House 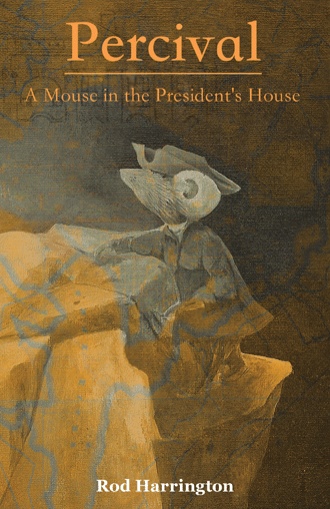 Suddenly there was a great groan followed by a quantity of foul breath as the jaws of the beast opened in a yawn. Balfour was stirring. The morning hours were beginning to draw light around the edges of the tent, enough light to see a bit, and to be seen. The mice froze in place, eyes staring. The great red tail moved slowly like a huge snake. Then everything was still. The only sound was the Admiral’s snores. It suddenly seemed too quiet.
Without warning, Balfour’s head rose like a dragon’s with eyes of fire. His teeth shone, white legions of death. The huge dog-fox pounced upon the keg knocking it into the tent wall. Mice exploded like grape shot from a cannon and ran along the edge of the tent with the monster’s heavy breath right behind. Desperately they sought an opening as the beast shouldered everything in his path aside, snapping furiously at them amid the crashing furnishings.
They ran into a rolled up map that had fallen to the floor, but the huge teeth pierced right through, clashing together and separating Percy from his friends like ivory bars. Balfour shook the map, throwing the two rescuers through the air where they landed on Admiral Cockburn’s cot. By this time the Admiral, astounded, was sitting up. “Guard, guard!” the Admiral shouted. Balfour dropped the map with Percy still inside and leaped at his master’s cot. The momentum brought the cot smashing into the wall of the tent. “What is happening? The enemy is upon us!” shouted the Admiral as the cot collapsed, bringing the tent down around it.
Soldiers surrounded the writhing tent from which screams and growls were filling the air. A bugle sounded as the whole regiment arose for what appeared to be a major assault; indeed, three mice and a half-bred dog fox were attacking their commanding officer. With bayonets fixed the guards held at the ready. The growling and screams intensified as one soldier carefully grasped a corner of the tent and slit it with his bayonet. Others grasped the edges and ripped the tent wide open.
There sat the Admiral in his nightshirt on the ruins of his cot, Balfour upon him snarling and struggling in his grasp. The Admiral’s curses did credit to the worst gutter-trash in England. There was a moment of surprised silence from the troops and then the whole assemblage burst into laughter.

It is Washington, August 24, 1814, and the president’s house is burning. Percival Mouse and his wife, Annie, have known for years this was coming, and they are not unprepared. They have risked everything to live in this time and place, hoping to save their present and future families. Their enemy, Balfour, a red dog of war, killed Percy’s father and has arrived with Admiral Cockburn, commander of the English troops, hoping to destroy the entire mouse family.

This is how life in the president’s house is for one mouse family. Rod Harrington’s Percival, a Mouse in the President’s House combines fantasy and history to create an entertaining and interesting book. The Mouse family finds itself involved in historical events and close companions with many important historical figures of the times. Among them is Percival’s friend, Benjamin Banneker, America’s first black man of science, who uses his knowledge of the universe and the physics of time travel for good, even from beyond his humble grave in Maryland. Readers will find themselves caught up in the history of the United States through the eyes and experiences of some of the country’s smallest citizens.

Rod Harrington is a former arts educator, songwriter and regional humorist from Connecticut. He wrote and performed the classic CD, Welcome to Maine. With his wife, Lucile, he wrote, In November, a collection of short stories set in Nantucket and along the coast of Maine where he spends summers.