Not Just a Recipe 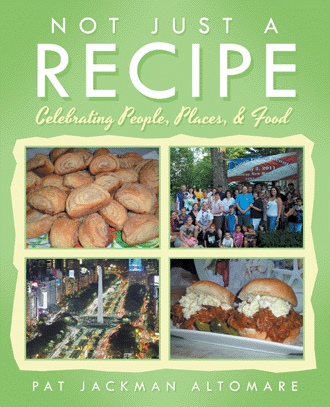 INTRODUCTION
More people than ever are “reading” cookbooks, seeking more information about a recipe, the “who, when, and where” that gives it life. I have poured over my collection of 500- plus past newspaper columns and have chosen recipes that were popular, interesting, and dependable, recipes of home and tradition that have been devoured by food lovers and home cooks who enjoyed them.
NOT JUST A RECIPE is culinary prose containing stories of experiences, family, and travels that came together during my years as a newspaper food columnist, all centered around an infinite variety of recipes. Utilizing a significant human interest component, I present these stories and recipes in a down-to-earth writing style that is relaxed and informal.
It all began in 2003, when I offered a recipe each week to our local paper from a huge collection of recipes I had inherited from Mom, both grandmothers, and Aunts. I started with the best recipes and kept going through the collections that came from these strong women of my past. The recipes had an aura of home, family, and tradition; I couldn’t throw them away. They represent years these women spent cooking for their families and how important that was to them. To the recipes I started adding what information I could gather about them. For example, my mother’s cinnamon roll-ups were a way to use extra pie dough. I added who made them first and when and how they were named “Just-a-Minute’s”. The response was overwhelming, interest was piqued as readers learned about my family, life, and travels; always letting me know that they loved more than just a recipe. I never lost sight though that the recipes couldn’t take a back seat, they had to be good.
I have gathered those recipes and stories that generated a lot of positive feedback and expressions of appreciation, along with thoughtful and enjoyable recollections of events, family, and experiences.
There is a fine line between living in the past and appreciating the past. All I have to do is remember my grandmothers, aunts, and my mother as they were in their kitchens, so much in their element, and it conjures deep feelings of respect and gratitude for their cooking, teachings, and love of family, much of it represented by the recipes they left behind, almost like a signature.
In Chapter five, you will be engaged by delightful home cooks who sent recipes, wrote suggestions, gave feedback and most of all taught me a lot. Meet just a few:
Barbara lives in Australia and introduced me to a Lamington, which is as popular to Aussies as our brownie is to us. Lamingtons are cake squares, chocolate frosted and rolled in coconut, found in bake sales and every convenience store in Australia. Barbara’s brother lives in New England and would send my column to her every week, and she would write me of her life in Australia.
Meet Ethyl, originally from Colombia, who graciously shares her family’s Hanukah traditions, along with her Colombian variation for Potato Latkes.
And the surprise of meeting Dennis (from Michigan) whose note was in my inbox one morning, concerning a past column I wrote on old cookbooks that focused on the famous Mama Leone’s restaurant in New York. He remembered his mother often making a famous dish from that restaurant, and asked if I could find the recipe.
In NOT JUST A RECIPE you will find a story you identify with, a good recipe that is new to your collection, and more than a few minutes of enjoyment; a cookbook to read that will trigger a memory and bring pleasure.

For over ten years, Pat Jackman Altomare shared beloved recipes from her vast inherited collection through over five hundred newspaper columns that highlighted a sense of home, family, and traditions created by strong women in her past.

In Not Just a Recipe, Altomare not only shares traditional recipes from her family as well as other home cooks from around the world, but also provides proven kitchen tips and homemade gift ideas, recipe reviews and comments, and food memories. Featured recipes include cinnamon roll-ups that utilize leftover pie dough, pulled pork sliders, buttermilk fried chicken, Columbian ajiaco, Texas caviar, fried green tomato BLT sandwiches, Australian lamingtons, and snickers candy. Included is advice on how to make rubs, spices, and marinades, grow fresh herbs, and create an annual “to do” list for the kitchen.

Not Just a Recipe shares entertaining stories, proven recipes, and time-tested wisdom sure to please home cooks passionate about creating memories and delicious meals in their own kitchens.

Pat Jackman Altomare was a newspaper food columnist from 2003 to 2014. In her columns, she shared many recipes from her vast inherited collection. Pat is a past member of the Association of Food Journalists and currently resides in Douglas, Massachusetts. Not Just a Recipe is her first book.