Dancing in the Desert 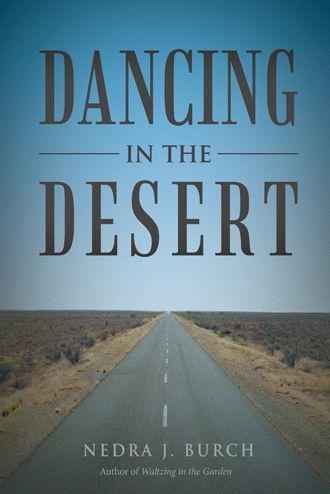 What was it that drew Clare to the window every night? She peered at the silver- shadowed desert, taking in the grey shapes that seemed alive. She knew there was nothing that she could see that was living except the grass, mesquite bushes and tumbleweed that swished with the desert breezes, it was the almost constant winds that made the blowing shrubs look like shadowy figures creeping across the desert. She knew they weren’t real people but sometimes the quiet got to her and her imagination took over. As Clare gazed out the window, she saw a blinking strobe light in the distance. It seemed too far away to be on the highway but that was no doubt where it was, probably a state patrol officer giving a speeding ticket to a late night traveler, or maybe a border patrolman stopping a suspicious vehicle looking for “undocumented” aliens or drugs. Being only forty miles from Mexico, there were numerous border patrol vehicles in the area as well as frequent flyover’s by drones and National Guard helicopters. She wondered how many illegal aliens were actually apprehended crossing the dry desert. She’d once seen a man flying one of those little gliders over her house. Later she learned that usually drug smugglers used that method to carry contraband over the border to a rendezvous point somewhere in the desert on the American side of the border. The little gliders could fly under radar and meet up with their counterparts, make their delivery and return to Mexico in relative safety.

As she gazed at the lights in the distance she noted that the strobe was no longer flickering but colored lights continued to glow. As she watched, the lights were suddenly extinguished. It was total darkness, as total as one could get on a moonlit night anyway. It was unnerving. She didn’t see taillights indicating vehicles driving off to the east, no headlights showing them heading west. Strange, she thought. Then headlights again lit up the distance and headed into town along the roadway. It seemed funny. Only one set of headlights came toward the junction of Hwy 9 and 338. Shouldn’t there have been two sets of lights at least, one going east and one going west? It seemed strange but she didn’t dwell on it….then.

The single gunshot tears through the night and brings sorrow and tragedy to one of Portland’s premier families. Young Clare Goforth is now fighting for her life, while her mother fades away, trapped in her own private hell. Her father, Alex, is left trying to pick up the pieces of their shattered world, but he has several demons of his own.

Time allows for healing as the Goforth family struggles to make a new life for itself, still wondering why such a terrible tragedy could befall them. Clare, in recovery, seeks quiet solitude to work out her problems; meanwhile, Alex’s wife exists in her own imagined world. He’s caught in an emotional web that ties his wife and daughter in limbo.

New home and friends are helpful in the fight to regain a semblance of a happy life, but it’s truly up to the Goforths to find their way back to fulfillment. Steps forward are heartbreaking and sometimes rewarding. Yet, Alex fears life may never be what it once was. Will his beloved daughter and wife ever find peace again, and will he have the strength to be the man they need?

Nedra J. Burch worked for the government for over thirty years and also enjoyed being a military wife and mother. She enjoys reading, writing fiction and poetry, quilting, and cooking. She is also the author of Waltzing in the Garden.