Sylvie and the Star Tickler 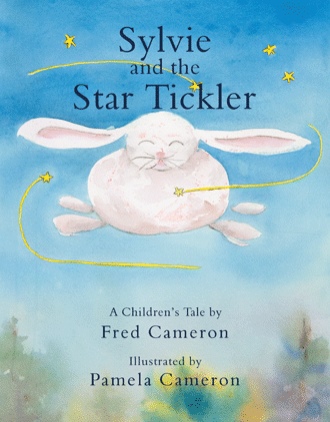 Once there was a small rabbit named Sylvie. She lived in magical Abergreen forest, in a small box with a funny sticker on one side. And she liked to eat the pink grass that grew nearby.

Everyone in the forest could do magical tricks, except Sylvie. Trot was a friendly cocker spaniel who came to visit Sylvie sometimes. He liked to make the fish swim around in circles and jump high out of the water so he could see the sun shining on their bright, silver scales. Sasha the Fox, could make apples fall from the tree just by staring at them. She would run off with a juicy apple held delicately in her mouth to share with her two new kits who chased each other in dizzying circles when they played, steadily rising in the air until a POP sounded, tumbling them back to the ground.

Even the Great Tree that grew near Sylvie's box would sprinkle hidden drops of water from its leaves on the hottest days to cool off any animals that came to sit underneath it.

But Sylvie was very unhappy because she couldn’t do any magic. She could not charm apples or fishes. She could not even make herself invisible like the other rabbits could when there was danger. Instead she had to run away and hide. She tried and she tried, but she couldn't do even one magical trick.

One day Sylvie woke up and remembered it was her birthday. She ate some pink grass which she had stored in a corner of her box, and then jumped out and scampered down towards the Great Tree to see who was there. Maybe someone would teach her how to do magic today.

Sylvie Rabbit turns three years old today. But instead of being happy, she’s sad because she can’t perform any magic. She can’t even make herself invisible as can all the other rabbits in Abergreen Forest.

So she embarks on an adventure to find the great wizard Star-Tickler, who Mr. Littlefrog says can surely help her do magic.

You are invited to join Sylvie on an adventure to discover the very best magic of all: the magic of kindness that lives in everyone.