The End of Democracy and Faith 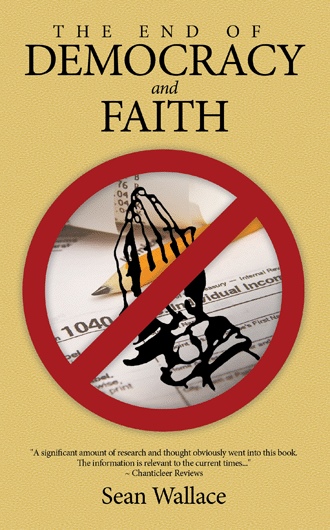 The individual has an objective identity as an object in reality. An identity that has a fundamental right to life, a fundamental right to retain the efforts of his labor (production, capital, property, etc.), a fundamental right to not have aggression used against him. The U.S. government has eroded the influence that the individual was able to exercise within its borders. The individual had the ability to keep his own income. Now, the majority decides how the individual should use his income. The individual no longer makes those choices. We can see that the “wishlist” that Karl Marx wished for around 200 years ago has almost come to full fruition. Many people even celebrate democracy as if it is the greatest thing since sliced bread. Perhaps, they compare it to communism or totalitarian regimes and pride themselves with their “voice” and “influence” they believe they have through democracy. This majority thinking is so prevalent that even groups that consider themselves bastions of freedom such as the Libertarian Party still run candidates for president and other public seats.
Investments can affect you at the most fundamental level. We are surrounded by the basic theft and thievery of monetary inflation and high frequency trading. Various investments can be manipulated at the margin or more or even much more. Often, we can go for a while and not have a bubble or crash. How many people knew of CDO (collateralized debt obligations), CDS (credit default swaps), MBS (mortgage backed securities), total return swaps, interest rate swaps, forward rate agreements, forward contracts and other derivatives and securitization before the 2008 “great recession?” How many people were aware of the OTC (over the counter markets) where investment banks make markets in the above derivatives and do transactions with hedge funds, commercial banks and other investment banks?
The assault against the individual will continue in varying degree. The 2008 “great recession” was aided by money being given (loaned at almost zero percent) to banks by the government. The banks funneled much of this money and risk into derivatives. The government stepped in again and “insured” the money that they had just given to the banks. Through a bailout of AIG, derivatives use by Fannie Mae and Freddie Mac, FDIC accepting derivatives debt from bank issued bonds and setting consumer deposit insurance of at least $100,000 for each consumer account that the banks can use as insurance against their speculation in stock or other markets; the government assaulted the individual through collectivism. Fueled by this almost free money and the security of the insurance that the government provided to use it, banks had the license and leverage to make more loans on lower standards of creditworthiness. This government money and insurance increased the size and damage of the housing crisis. The free money and insurance given by the government is a product of majority rule and democracy. The individual left to himself would not loan money to the bank for free. That would be all risk and no reward. When groups take other people’s money politically through majority rule, the individual connection of risk may not be felt. It is not their own money. As I said before, investments can affect you at the most fundamental level. The majority or collective helped cause the last “great recession” of 2008.
The answer to the problem of free money and insurance that helped cause the “great recession” is not more free money and insurance. That is exactly what has occurred. The government still hands out free money and insurance. Derivatives have grown from a notional value of $95.2 trillion in 2000 to $672.6 trillion in June, 2008 according to the Financial Crisis Inquiry Report which cited the Bank for International Settlements data on semiannual OTC derivatives statistics. The gross market value of these derivatives grew from $3.2 trillion to $20.3 trillion in the same timeframe. From June, 2008 derivatives have grown from $672.6 trillion to an estimated 1.2 quadrillion or 1,200 trillion now in 2014. The world’s GDP is around 85 trillion by comparison. Of course, some might be quick to point out that only interest payments may actually change hands in many swaps. Or that the notional value is a leveraged multiple of the actual money put up for collateral or that will actually change hands in an exchange. So, they might argue that comparing world GDP to the notional value of world derivatives is misleading. They might argue that derivatives are notional. That is mostly true. In the case of a CDS (credit default swap) the notional value could become the actual value. The purchaser of a CDS makes payments for a certain period of time. The seller of the CDS accepts payments from the purchaser in return for an agreement to pay off the debt of a third party loan that is owed to the purchaser of the CDS if that third party defaults on the loan to the purchaser. The global CDS market alone equals a large majority of the value of our annual U.S. GDP. You can make a comparison between world GDP and world derivatives as long as you make distinctions in the nature of derivatives.
However you want or are able to measure it, the fundamental assault against the individual is growing with each “cure” usually being more collectivism to “solve” the last dose of failed or damaging collectivism. All the while, we embrace majority rule and collectivism hoping this time will be different. This is the same sentiment that a gambler has when he or she pulls the lever of the slot machine hoping that this time will be different. This is part of the danger of the fall of the individual. Most individuals don’t understand the damage to their freedom and finances. They don’t understand the individual at the most basic levels. This lack of understanding helps to affect the individual’s own demise and fall.

We are born into an automatic social contract--democracy--that we never consent to. While seemingly championing the individual and the value of individual choice, democracy ultimately degenerates into collectivism and mob rule. Coupled with a reified religious mythology, widespread economic and market collapse, and deep political corruption, the individual is lost within a democracy to the collective majority. However, can a just, viable form of governance and society exist without the coercion of democracy?

The End of Democracy and Faith presents an alternative vision that wrests the value of individual choice from mob rule and restores the consent and supremacy of the individual in the social contract. Eschewing faith and hope instead for a movement toward building bonds with our fellow men and women and for taking the reins and helping each other save our future, it explores the connections between our morality, identity, history, philosophy, and economy. And with the introduction of the concept of the voluntary state, it offers a philosophical foundation in support of using freedom instead of coercion to handle our responsibilities regarding our own income, retirement, health care, and way of life.

The promises of democracy and any individualism inherent to the founding of the nation have been largely replaced by a perilous, disenfranchising collectivism. Pursuing an alternative social reality--one that can truly enable free markets, overcome religious myth, and restore individual choice--represents a true challenge to the moral depravity of democracy and faith.

“There are certain elements holding back our economy, the author asserts, though economists rarely make mention of them, due to their status as societal sacred cows. His arguments against democracy are the most engaging sections of the book, in part because such cases are so infrequently made.”
-- Kirkus Reviews

Sean Wallace received his bachelor of arts degree in economics from California State University, Hayward, and he has passed the Series 3 National Commodity Futures Examination. Trading and investing in futures, options, ETFs, ETNs, and stocks, he works in manufacturing and lives in Colorado with his wife and stepson.