The Short Man of Nuremberg 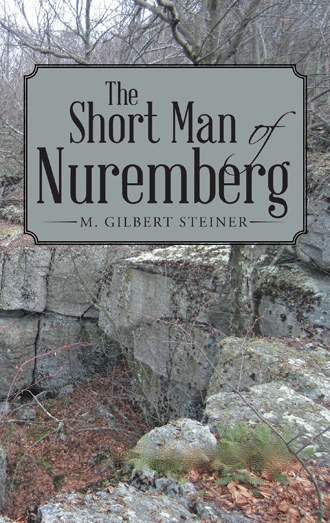 The stranger maneuvered his pickup alongside Maynard’s, established eye contact, and proffered a polite wave. Maynard exited his pickup with the picnic basket. As the stranger climbed out of his pickup, he said, “Come, Gus.” At this beckoning, Maynard turned his attention to a black, furry behemoth lunging out of the pickup. Named after Gustavus Adolphus, the canine goliath stood at the side of the stranger. The stranger observed Maynard’s uneasiness and walked over to extend his hand.

Maynard reciprocated and grasped the hand of the stranger. Still concerned about how the dog would react, Maynard thought, “He has a firm handshake.”

“Hello, I am Maynard Perriwinkle. My wife, Amelia, and I wanted to welcome you to Nuremberg. Amelia thought you might enjoy some corn chowder, biscuits, and coffee cake.”

The man replied, “That is very kind of you and your wife.” As he accepted the basket, he said, “Please, come in and allow me to offer you a cup of coffee.”

Summoning his determination to master his awkwardness in conversing with the stranger and his wariness of the dog, Maynard accepted the invitation of the stranger. “Thank you. I would enjoy a cup of coffee.”

Maynard followed the stranger and his dog into the house. Maynard reflected on the last time he entered Aunt Linda’s house. After her death, Donnie held an estate sale. He recalled Hugo Kleinkoenig the auctioneer donning a John Deere ball cap starting off the bids with his rapid-fire, mechanical delivery. Each successive bid was acknowledged with a hand signal resembling the chopping motion of an ax and a “Yep!” Hugo was known for his ability to squeeze maximum bids out of the crowd.

“Please have a seat, Mr. Perriwinkle.”

“Thank you. Ah, call me, Maynard.” Maynard watched the man as he measured out exactly six tablespoons of coffee grounds and poured ten cups of water into the coffee maker.

“Please allow me to place this wonderful meal from your wife in the refrigerator.”

The aroma of hazelnut wafted through the kitchen as the coffee brewed. “Maynard, would you like a piece of peanut butter coffee cake?”

While the stranger sliced generous pieces of coffee cake and placed them on a dessert plate, he said, “This coffee cake is one of Cousin Frieda’s creations.”

Maynard said, “Yes. Cousin Frieda is widely known in these parts for her baking.” He thought to himself, “Yes–baking up gossip”

As he poured the coffee, he asked Maynard, “Were you raised in Nuremberg?”

“Yes. I am third generation.” Maynard elaborated further on his lineage.

“Thank you. Gus is a Black Russian Terrier.” Upon hearing his name, Gus strutted toward his master and rested his head on his master’s lap.

Maynard thought for a moment. “Oh, yes. I recall reading a description of that breed in one of my magazines. They are described as loyal, courageous dogs.”

“He is a character.” Then, the stranger shifted the conversation. “Maynard, I noticed a gun rack in your pick-up. Do you hunt?”

“Well, I try my luck at deer hunting. Nothing tastes finer than Amelia’s venison chili.”

“Speaking of Amelia--” began his host as he presented an object he retrieved from the floor to Maynard. “Her earring must have fallen off when she placed the dishes in the basket. I noticed it on the floor when I poured the coffee.” Maynard recognized the piece of jewelry instantly. This earring was part of a matching set he gave Amelia for their fifteenth wedding anniversary present.

“I am certain she will be delighted to have this back. I bet she is tearing the house apart as we speak trying to find it.” Unconsciously, Maynard began devouring his coffee cake. His sudden preoccupation almost resulted in forgetting to invite the stranger to the potluck dinner. “We would like to invite you to our church potluck dinner tomorrow evening. We always have a good turn out.”

“I am delighted to accept your invitation. Would you like me to bring anything?”

“Just your appetite. There is always enough to feed the United States Marine Corps. We’ll look forward to seeing you there.” Maynard stole a glance at his watch and said, “Well, I better get back or Amelia will send out a search party for me. Thank you for the coffee and coffee cake.”

“Thank you for the basket of food.” Gus escorted Maynard to the door.

Fifteen minutes later, Maynard stood in the kitchen of his own home. Amelia was preparing her dishes to pass. “Well, it is done. He accepted the invitation. But, I must say, you should be ashamed of yourself sneaking into his place.”

“How did you find out I went into his house?”

“I did not know for sure until you just admitted it.” He extracted the earring from his shirt pocket and placed it in her hand. “I believe you lost this during your fact-finding mission.” Amelia’s countenance acquired a crimson hue. Maynard stared out of the kitchen window and said, “I find it ironic that you, who have always declared how violated you would feel if someone slunk through our home, should violate his home. You are poking your nose where it doesn’t belong.”

Her eyes transfixed on the earring, she did not dare inquire of Maynard if he thought the stranger suspected she had been in his home. She knew all too well that if Maynard knew, the stranger knew.

The Green Mountain near Nuremberg, Pennsylvania, attracts both hunters and lovers with its magnetic pull. But when it provides a sanctuary for a stranger with a dubious history, the village and the lives of its residents are inexorably altered forever.

After the short man arrives and begins a home restoration, he gains the attention of curious locals who engage in wild speculation regarding his identity and reasons for moving to Nuremberg. Determined to convince the stranger to adopt their ways, two of the village’s female residents embark on a fact-finding mission that leads them to pronouncements that pale in comparison to the truth. But when one of the women finally receives a glimpse of truth about the stranger, she must now decide whether to shun the potential risk and act on her affection as everyone else wonders whether the lure of Green Mountain or divine intervention will determine their future.

The Short Man of Nuremberg shares the tale of Pennsylvania villagers’ persistent quest to learn the truth about their new resident with a mysterious past.

M. Gilbert Steiner was raised on a dairy farm in the Midwest. Missionaries who visited his small Lutheran congregation fueled his interest in foreign travel. He has traveled extensively through Europe, Asia and the Middle East. Along with a Doctor of Ministry degree and a Fellowship at the University in Klagenfurt, Austria, he holds Masters degrees in theology, psychology and national decision-making. One of his many cherished memories of childhood was reading books on a fence post while he filled the water trough for the calves. He has written various religious works including a book on spiritual warfare and he contributed to a study Bible.