The Dolphin among Orcas 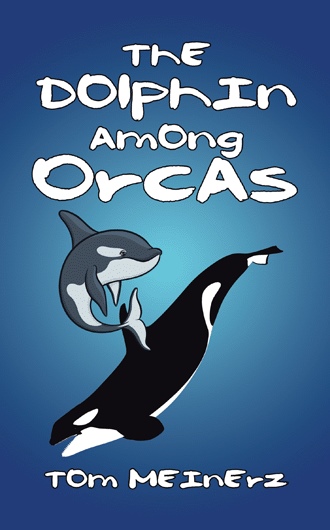 Antonia immediately carried the newborn to the surface, to get its first breath of air. She had seen that Miretta was exhausted and had lost some blood at the birthing. She signaled that other dolphins should go to her aid.

This was never a good thing, as there are always numerous predators that come to this area, just because there are increased chances for finding newborns, or injured mothers, to prey upon. Any animal that is bleeding, even if just a little, runs the risk of attracting a predator. Miretta knew her only chance was to get her calf and herself, with the rest of the dolphins in the pod, near the surface.

Antonia looked at the newborn, but something was wrong, the calf did not look like a normal dolphin calf. There was something wrong with the newborn’s back. It was crooked and the tail was almost totally inflexible.

Miretta swam up to her calf for a closer look. It has a pronounced curve in it’s back, half way between the dorsal fin and the tail. Her calf was malformed! The tail was stiff and set in one position, where it could only move up and down a little bit. The calf could set the tail at a crooked angle to either side, but then it would lock in that position, causing the calf to turn in that direction and drift downwards. The only control the calf had was with his front flippers, which were a little stunted, but they were much wider and more powerful than was usually the case for a newborn dolphin.

Miretta allowed her calf to rest against her, while it tested out all of its moving parts, to see what it could do to control its movements. Although the tail was stiff and awkward to control, the calf found that it had those strong front flippers, which he used to pull himself forward, fairly rapidly. But it took a lot of energy and it was not a very efficient way to move. This is a key point to dolphin swimming techniques. If you are not efficient in movement, then you will need more energy and that means more food!

Mother and calf worked out which movements the calf could make and which it could not. It was going to be a long slow process it appeared, but Miretta was ready for it.

Other dolphins were starting to focus on the fact that Miretta’s calf was malformed. The calf that is born malformed, almost always was going to die soon after birth. There was an undertone from other new dolphin mothers about how “sad it was,” for Miretta. Most of the dolphins were aware that she was having health problems and that being so weak herself, she was not likely to be able to help her calf keep up or grow up.

Other young dolphins were making comments about how Miretta’s calf was “crippled” and “not normal” and other hurtful and mean things. But they were not used to having a malformed dolphin in their midst. Usually the mother’s of such malformed newborns, would take them where they could be found by a predator, or left to die at the bottom of the ocean. It wasn’t common for any “different” dolphins to survive to become a member of a pod. So maybe we have to forgive the other dolphins for being so mean spirited. They just don’t know any better, yet.

She and the calf spent many hours, discovering the manner in which he could best move. She had to show him how to find food and catch it for himself. She mostly taught him to seek small crabs, muscles and worms, all things he could find for himself, that he would be able to capture without a chase. Dolphins traditionally work together and circle around a school of fish and then close in on them, making the fish school tighter together. Then individual dolphins take turns swimming up through the clustered fish, catching and swallowing fish along the way.

A malformed calf is never going to have that same agility, nor the strength of a healthy dolphin. In this calf’s case, the rigid tail was more of a drag in the water, than a force to propel itself forward. But with very well developed front flippers, the calf managed to overcome some of the drag. But he still was not able to keep up with the pod all of the time. When the pod moved long distances, he would often have to swim extra long hours to catch up. Miretta had to swim with him because of her poor health, so she didn’t mind the slower pace. But she knew that it could soon become a problem for the rest of the pod. But she was determined to help her offspring to achieve what he could, and to benefit the pod. That was always Miretta’s message to him; “What is good for the pod is what you should always do.”

After the first few weeks, the calf was to be given a name and then to register him as a member of the pod. Miretta could see that there was no quit in this calf. Every time that they practiced methods for swimming or catching food, she saw that the calf was working extra hard to accomplish all the techniques that she had developed for him. Miretta was still very tired and weak, so she would often have to just encourage the calf, as he practiced those techniques alone, away from her.

Miretta thought about a name for this calf, and she finally settled on “Courage”, a name she thought he earned. And that was the name she registered with the Council of Dolphins. However, a few dolphins protested and complained that the malformed dolphin should not be allowed to join a dolphin pod. These complaints were based on what had been the tradition for eons of time, among most all dolphin pods.

This story brings to light a global problem that is right under our noises, but almost invisible to our eyes.

A dolphin pod-family has a very rare occurrence; twin sister calves are born. This is followed by another, even rarer occurrence, the birth of a malformed calf.

Courage was born with a malformed back and tail. His birth brings first curiosity, but then ridicule, followed by bullying from others. He and his mother had to travel behind the pod, most often alone. But Courage overcomes his limitations and instead, turns them into an advantage.

This is an entertaining story, where children become aware of a worsening global pollution problem, for which their generation will find solutions. The story addresses what bullying is, and what may happen as a result. It also shows how perceived limitations can become unique talents, allowing for a successful life. The story has one foot in a fanciful tale, but the other foot is firmly planted in the real world, with similar events happening in nature, in the wilds.

Tom Meinerz was a survival instructor for the US Air Force and has been an avid outdoorsman, hunter, and fisherman for over forty years. Recently, he learned about the massive trash areas in the worlds’ oceans and the degree to which they have become very dangerous to wildlife. The Dolphin among Orcas is based on true events.