The Liberation of Rebecca Stern

Being the Diary of a Jewish Housewife Who Died of Cancer or Malpractice, or Both, After a Life of Meaningful Endeavor 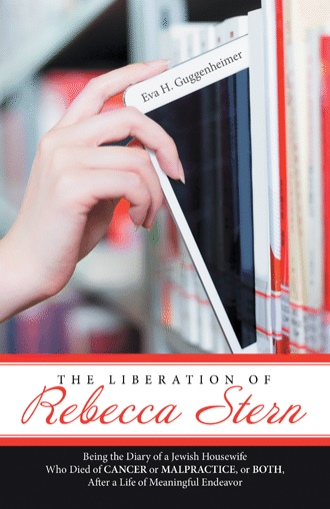 Once upon a time there was a werewolf, who with his wife and children lived in a small suburban brick house. Outwardly the werewolf looked like an ordinary an, and no one, not even his family, suspected what he really was.

The werewolf worked as a bank teller and seemed to lead a highly respectable life But he had a secret girl friend, who lived in Brooklyn and worked at the same bank as he. Once a week the werewolf came to see the girl at her apartment in Brooklyn.

For some time this arrangement had continued without arousing suspicion. But one day, when the rent for the girl's apartment was due, the werewolf forgot to bring the cash with him and wrote a check instead. Worse, he even entered the amount in his register as being "for Belinda."
"Who's Belinda?" asked his wife, when she saw the register. "Belinda?" yawned the werewolf, "How should I know?' "Well here it says 'for Belinda' pointed out his wife, who had the habit of going over the register once a month, "and a rather big sum, too, over a hundred dollars.
"Oh,yes, now I remember," the werewolf said casually. "Belinda's the name of the company that sold me the air conditioner last month. Funny name, don't you think?"

The wife, who was not convinced, nevertheless said nothing and resumed her crochet work. She was making a long, pink shawl which she planned to wear at next week's PTA meeting over her old brown dress. But her stiches now were crooked and irregular and more than once she had to take out an entire row.

The werewolf secretly went to the air conditioning company ( whose name was not Belinda but Bolair) and paid his bill in cash. Then he swore to himself that he would not fall into the same trap again.

But raising the cash was not easy. There was inflation - prices rose higher and higher, while the werewolf's salary remained the same. Moreover his wife, who knew exactly what he made, now had become suspicious. The werewolf has seen her poring over the bank's monthly statement and copy out the items on a sheet of paper. It was impossible now to divert the rent money by faking the account or by taking out more spending money for himself.

When the werewolf came again to see his girl friend he was very dejected. "Belinda," he began, then fell silent and looked out the window into the dreary backyard. "What's the matter?" asked Belinda. "You not feeling good?" "Belinda, I can't pay your rent any longer, my wife is getting suspicious." " Oh shit. Get out of here, Your wife, my foot. That's what they all say, my wife this and my wife that. If you don't want to pay I'll find somebody else. Now get out, you creep, will you, get out, get out, get out!" "All right, don't get excited," said the werewolf, "I'll manage somehow." And he promised Belinda to bring her the money next time.

Some nights afterwards, when the moon was full, the werewolf drove to a big cemetery outside Brooklyn. He parked his car in a side street and entered the cemetery through a rusty gate that could no longer be closed. The gate creaked, but no one noticed him. The werewolf quickly took off his clothes, urinated on thorn, and murmured: "Cordax, mordax, barsibellibordax" three times, and then again seven times. By then the clothes had turned to stone and the man had turned into a wolf.

The wolf looked about cautiously, wheeled around several times, and suddenly ran off into Brooklyn. He ran until he found an all-night grocery store, and when he saw that the saleslady was alone and the cash drawer was open he entered, bit her throat, and took as many bills from the drawer as he could hold in his mouth. Then he quickly returned to the cemetery, where he changed back into human shape.

The money from this robbery was enough to pay Belinda" rent for several months, but it gave out eventually. Moreover Belinda wanted a fur coat for the winter, a Dynel wig, a diamond ring, a purple couch, and yellow wall to wall carpeting. "If only I dared," she sighed one day. "you see, I actually am a lady werewolf, I can change into a wolf. I could rob the bank as a wolf and later change back to normal, and they would never find out."

The werewolf looked at her, aghast. "You-you-you mean you are a l-l-lady werewolf?" he stuttered at last. "What makes you think so?" "Oh, it's a fact," said Belinda casually." I've done it lots of times. Of course none of my people know anything about it. They almost found out when I ate Norton Levine and he never showed up any more to take me out to dinner."

"Well," said the werewolf, "if you can really change into a wolf, maybe you could rob the bank, after all. You might be able to squeeze through between the bars and get to the safe. I could leave the safe open for you that night. We could take the money and move to Saint-Tropez, or Copenhagen."

So, when the moon was full again the werewolf left the safe of the bank open and only locked the outer doors, which consisted of thick, heavy steel bars.

After dark he and Belinda drove to the cemetery, where Belinda undressed, urinated on her clothes, murmured: "Cordax, mordax, barsibelliboax" first three times, then seven times, and turned into a wolf. She licked the werewolf's hand with a heavy tongue, howled softly, then trudged off to rob the bank.

It took a long time for Belinda to come back to the car, but in her teeth she clutched money and securities worth over a million dollars. At first the werewolf was delighted, but then he suddenly felt unwilling to share this wealth with Belinda. "Why don't you go again" he suggested. "We could use some more, I think." So Belinda went off once more, while the werewolf carefully stowed the money in his car. He then took the stones that had been Belinda's clothes and one by one dropped them into a nearby water ditch. He drove home without waiting for Belinda to return.

Next morning the werewolf went to the bank as usual and was told that a big robbery had taken place with the heavy steel bars all locked and no traces anywhere except for some dog's footprints. The police were working on the case, but no one had any idea who the robber might have been and how he had managed to get to the safe through closed doors.

That night the werewolf again drove to the cemetery and found a small she-wolf running around in circles on the spot where Belinda's clothes had been. When he approached the wolf jumped up to him and licked his hands, then pulled him towards the empty spot, whining softly. "Yes, yes. I know, Belinda," said the werewolf, "your clothes are gone, lost, bye-bye. What do we do now? Want to go to a nice pretty zoo?" and he stuffed Belinda into the trunk of his car, despite her frantic efforts to cut loose.

The werewolf sold Belinda to the Bronx zoo and for the time being did not take another girl friend. He decided that it was too much trouble and besides he had nothing against his wife. It was a problem, of course, to hide the money, but he finally found a way to take care of that.

Everything would have been fine for the werewolf if the cages in the Bronx zoo had been locked more carefully. One night Belinda managed to open her cage and escaped from the zoo. It took her hours to reach the little brick house on Long Island where the werewolf lived, but she finally made it. She crept into the house through an open window, opened the bedroom door, and jumped on the bed. The werewolf slept on; but the wife woke up in time to see a wolf bite through her husband's neck. The bones cracked and blood gushed from the wound. The wife was so horrified that she could not move or even scream.

As she poises her pen over the pages of her diary, Rebecca Stern is not concerned with literary value. For her, the diary is simply a means of survival--a place of recreation and a vehicle to paradise. After Rebecca leaves Earth before the age of fifty, her family gifts her letters, papers, and diary pages to an editor friend who reads it in amazement. After receiving approval from Rebecca’s husband, the friend shares Rebecca’s life story--told through both poetry and short stories--as well as her own commentaries.

Ranging from the humorous to the tragic, Rebecca’s words are always thoughtful and heartfelt as she reveals a glimpse into the grit and grime of life. In poetry, stories, and fairy tales that reflect on daily routines, love, death, eternity, and the disadvantages of being a woman as well as highlight an eclectic group of characters, Rebecca uses her diary to create people, situations, and a reality that pleases her better than her own. Through it all, it soon becomes evident that Rebecca writes for no one but herself.

The Liberation of Rebecca Stern is a riveting and sometimes shocking collection of diary entries penned by a Jewish housewife and bequeathed to a friend following her death.

Eva H. Guggenheimer is a ninety-one-year-old linguist, poet, and artist. Born in Frankfurt, Germany, she moved with her family to Basel, Switzerland, when she was five. After she married and had three children, she first relocated to Israel and then America--where she returned to college and wrote her first book. Eva currently resides in West Hempstead, New York.