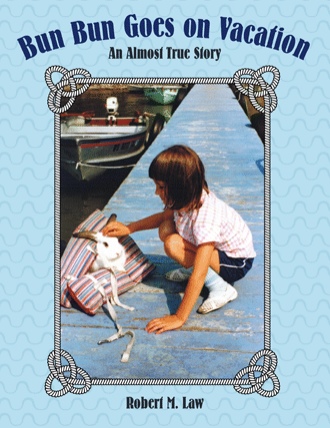 BUN BUN GOES ON VACATION is a tale about a little white rabbit given to a six-year old girt as an Easter present in Neenah, Wisconsin. She has been spending a lot of time with her grandparents, who own a cottage resort in Door County, Wisconsin. As Bun Bun has grown larger, it was not convenient for Bun Bun, the rabbit, to remain there in Neenah, so when it is time for Grandpa to move north to prepare the resort for renters, he takes Bun Bun along.
Grandpa finds an old cage for Bun Bun, but also gives him a lot of freedom in the big cottage of Redwood, where Grandpa lives for the summer and fall. There the adventure begins, with a loud thunderstorm and a strange loud noise in the house that even scares Grandpa. Could it be Bun Bun, or something more mysterious? You never could imagine what Grandpa discovered!
To leave Bun Bun outside with space to roam had an easy answer with a harness, a rope, and a boat anchor. When renters began to come with children, the rope was exchanged for a long one, which allowed Bun Bun to lead cottage kids all over the lawns and get a big idea. He didn’t really know just what he was. Since he was a baby bunny when taken from his mother, and was having fun with children, he would do the same things they liked to do. He would be a Cottage Kid!
He didn’t know what to do, but he would do whatever they did. When they sat in a circle, he would be right there with them. When they played in the sand, he would be right there. When they wanted to run, he would be right there leading them. They would need a rope because he could run faster, and that made him feel great. Cottage kids liked to play in the sand by the beach, and Bun Bun was right there with them. They also liked to play in the water. Now what would Bun Bun do? He could be in a boat. He could sit on a float. But what would he do in a moat? That is what Grandpa wanted to know, and he was taking pictures of everything that Bun Bun was doing with the children.
Candice would come to the cottages every weekend and share her bed with Bun Bun. Sometimes when she wasn’t there, he might sleep on it. One day when her cousins came for the weekend, she brought Bun Bun down to the boat dock. They knew that all the cottage kids should be wearing life jackets, so Candice tried to fit one on Bun Bun before they took him out in a row boat. It was so big that it might make him drown instead of saving his life, so they would take him along without it and be extra careful and not go far from shore. But that didn’t answer the question of what Bun Bun would do in the water. Would he sink or swim? That was the question they all wanted to answer? They would be surprised another day.
Bun Bun had the most fun with groups of children. One time Grandpa had children sit in a large circle on the lawn with Bun Bun moving about in the middle. When Grandpa patted the ground with his hand, Bun Bun came running over to him, perhaps expecting some M&Ms. Bun Bun had acquired a taste for them when growing up in Neenah, and would even jump up on a table to get some . He knew Grandpa very well. In fact one time when Grandpa had just sat down at his kitchen table for dinner, a rabbit suddenly appeared on the table and scurried over with his nose on Grandpa’s plate. What was there that this new cottage kid would not do?
There was to be more on the agenda involving a small red squirrel, a raccoon, and bird feeders. Bun Bun marveled at a little squirrel jumping about six feet away and landing on a bird feeder, and again at another feeder, What became even more mysterious was a noise after dark made by a stranger. Grandpa got a flashlight and discovered a raccoon on top of a large wooden feeder near the back door, where the little squirrel had made a long jump. Bun Bun had never seen such an animal, but now a final driving wish entered his little head. He had done everything else the cottage kids did and felt like one himself. Now could he get up on that feeder and do something no cottage kid could even dream of? When Grandpa saw his eyes look at him, then at the feeder, then back at Grandpa, back and forth, Grandpa knew what he had to do. He picked up the rabbit and placed him way up on top and then left him alone, and of course took his picture.. Bun Bun had reached the highest level of all the cottage kids As the vacation season had ended the time had come to close the cottages. What was to happen to Bun Bun? He would be a problem back home, so Grandpa decided to let him go, become a real rabbit and go into the real world, free in the woods of Door County. First he had Bun Bun type a farewell message to Candice. Showing him how to type on a typewriter, and giving him some M&Ms as encouragement, Bun Bun pawed a sad letter to Candice. The next day Grandpa opened a cottage door and left it for Bun Bun to slowly go away, never to be seen again, on that fall day way back in 1987.
Two days later Grandma read the letter to Candice, who had tears in her eyes for her little bundle of white fur that she had loved for over six months.

When a little girl’s grandpa decides to take her pet white rabbit, Bun Bun, to live with him in a large cottage on his Wisconsin resort during the tourist season, neither one has any idea of the fun that lies ahead for both of them!

Even though Bun Bun calls an old cage home, the grandpa also gives him a lot of freedom in the big cottage and the surrounding woods of Door County. From mysterious noises in the dark to the other animals that share the wilderness with him, Bun Bun begins an unforgettable adventure where he soon starts to believe he is a little more human than rabbit. As the self-proclaimed cottage kid learns how to swim, silently pleads for M&Ms, and climbs atop a large wooden feeder near the back door, Bunny certainly makes himself at home. But what will happen to him once the resort closes for the winter?

Bun Bun Goes on Vacation shares the delightful tale and real-life photographs of a little white rabbit’s adventures at a cottage resort where he attempts to do everything the other children do.

Robert M. Law spent three years in the army during World War II and eventually earned his teaching license. Over the years one might have found a variety of house plants decorating his classroom along with an aquarium and such creatures as gerbils, guinea pigs, white rats, parakeets, and even a snake. Now retired, he resides in Neenah, Wisconsin. This is his first children’s book.