Hispanic Ministry in a Medical Setting 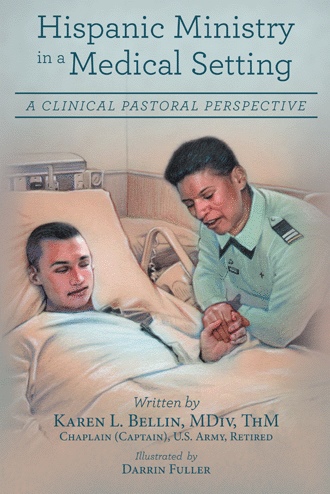 And he gave some to be apostles; and some, prophets; and some, evangelists; and some, pastors and teachers; for the perfecting of the saints, unto the work of ministering, unto the building up of the body of Christ.

Case Study #3: Often patients ask chaplains about treatment plans their doctors recommend. As a hospital chaplain, I played the role of a trusted counselor, teacher, and patient advocate regarding these decisions. For example, while at BAMC, I visited a fifty-two-year-old Hispanic Catholic woman. She asked for my advice about a risky surgery that the doctor had advised. She had a 30 percent chance of survival, but if she did not have surgery, she would die. The doctor had given her the statistical odds, but she was asking me for more. If she extended her life, she asked, would her quality of life be worth it?

I counseled her and shared St Ignatius’s decision-making process from The Spiritual Exercises of St. Ignatius.1  I told her that this method begins with thinking about what she has to decide. She said she really wanted to know if God wanted her to extend her life under any circumstances, or if doctors intervened, would it be against God’s will and therefore have a poor outcome? Next I said she should pray for grace to remain neutral; in other words, neither desire the surgery nor not desire the surgery, but only desire to do God’s will. In The Spiritual Exercises of St. Ignatius, St. Ignatius says, for example, “I should be like a balance at equilibrium, without leaning to either side, that I might be ready to follow whatever I perceive is more for the glory and praise of God our Lord and for the salvation of my soul."2  In other words, she should pray for God to inspire her spirit to do only what is to the praise of His glory. For example, she should be as objective as possible and consider what she would say if a trusted friend had asked her the same question. Also she should imagine standing before Jesus Christ on Judgment Day and choose that which would make her feel most comfortable if she had to explain her decision to Christ.

Then she should apply her reason to the matter, weighing the pros and cons; however, she should ultimately decide according to what is to her spiritual advantage, even if the decision doesn’t seem to be to her material advantage. After she weighs these options, noting any thoughts that stand out from the rest, she should make her decision and ask God to confirm it by bringing her peace of mind. A spiritual director gives the exercises, guiding the individual to make her own decisions. Therefore, I said it may be helpful to obtain as much guidance as possible from trusted spiritual counselors such as myself. Then, making her final decision, she should offer it to God in a prayer of faith.

I did not speak Spanish fluently; however, we understood each other because she spoke some English and I spoke some Spanish. She appreciated my efforts and helped me when necessary, correcting me in Spanish. In this way, I expanded my vocabulary and became a better counselor.

The above case study helps us to see the importance of dialogue between clergy and patients who must make value-laden end-of-life decisions. In his article, “The Role of the Clergy in Decisions about Life-Sustaining Treatment,” Rev. William A. Nelson wrote:

The traditional roles of offering sacraments, prayers, and pastoral presence cannot be underestimated. But there are several other roles that can be helpful as well. The first is a teaching role. In making life and death decisions, the patient is raising questions and making decisions about purpose, value, and meaning. All of these are spiritual issues that relate to a theological understanding of the nature of personhood. What is a person? What is my purpose? When am I no longer a child of God on this earth? The second role is counseling. The third role is patient advocate.

Rev. Nelson stated that, in teaching, the clergy must communicate a theological understanding to the patient about the nature of personhood. How could I convey such an important, subtle concept if I could not speak any Spanish? When we learn Spanish, we can become better pastors, teachers, counselors, and patient advocates. If we make an effort, the Hispanic patient will usually help us to fulfill these roles. Even if the chaplain can only ask a few questions, the chaplain can encourage the patient to disclose important information. In the above case, the patient shared information about her surgery that helped me to help her make an end-of-life decision. Because I had learned some Spanish, I was able to assume the roles of teacher and patient advocate, counseling her in a way that would have been impossible otherwise.

Jesus Christ did not simply convey his message with gestures. He spoke as a pastor, shepherd, teacher, and advocate in the language of the people. He did not just pat people on the shoulder to comfort them. He asked them what was wrong or what they needed. Then He responded to that need. For example, two blind men plead for mercy. “When Jesus heard them, he stopped and called, ‘What do you want me to do for you?’ ‘Lord,’ they said, ‘we want to see!’” (Matthew 20:32–33, NLT). Jesus responded by healing them. In telling Jesus what they wanted from Him, they actually confessed their faith that He could heal them. Whenever we dialogue with patients and their families, they have the opportunity to confess their belief that, through us, Jesus can ease their spiritual burdens.

Should every chaplain therefore learn all of the world’s languages? I do not advocate studying every language. I think we should learn a language when there is a growing population to whom we minister that speaks that language.  Military or civilian hospitals and VAMCs with level-one trauma centers may have significant Hispanic populations. If we learn Spanish, Hispanic family members can also receive pastoral care and feel less excluded. I firmly believe that chaplains who work with a significant Hispanic population should learn enough Spanish to minister to patients and family members.

Chaplains should at least learn how to introduce themselves, pray with, and listen to Hispanic patients and their families. We may even need to explain our role. Hispanic people may not understand the chaplain’s role, even though the patient may see a cross. Chaplain Louise Gregg said we need to explain that we are ministers of the hospital, because Hispanic patients associate the pastor with a parish, not the hospital. For example, on one occasion I told a Hispanic family that I was a chaplain. They asked, “What is a chaplain?” I was able to explain my role.

The Companion to Hispanic Ministry in a Medical Setting, Praying in Spanish, will help chaplains to speak Spanish while they learn. In it I have given some basics of the language and Scriptures that caregivers may use in their ministry.

[1] Louis J. Puhl, SJ, The Spiritual Exercises of St. Ignatius, Based on Studies

in the Language of the Autograph (Chicago: Loyola University Press, The

One night the emergency medical services (EMS) brought a Hispanic man into Brooke Army Medical Center’s (BAMC) emergency room after a motor vehicle accident. It quickly became apparent that he did not speak or understand English. The doctor shouted, “Who knows Spanish? Is there anyone here who knows Spanish?” It was twenty minutes before a bilingual nurse arrived to aid the medical staff in calming and treating the man. Precious minutes were lost as a result of the delay. Chaplain Bellin, a member of the trauma team, had put her hand on the patient’s shoulder as a gesture of comfort; but felt keenly how much more she could have helped had she been able to speak his language better.

Experiences like this one helped chaplain and author Rev. Karen L. Bellin, MDiv, ThM, to formulate her first CPE goal—to speak Spanish more fluently, and learn as much as she could about the culture and spirituality of Hispanics so that she could minister to them more effectively. In her book, Hispanic Ministry in a Medical Setting: A Clinical Pastoral Perspective, she shares the insights derived from her ministry with Hispanic patients and their families. Hospital chaplains who serve this growing minority will find indispensable information here to enable them to meet patients’ and their families’ spiritual needs with cultural sensitivity.

Karen L. Bellin, MDiv, ThM, earned a Bachelor of Arts in English Literature from Loyola University in Maryland, and Masters of Divinity and Theology from Princeton Theological Seminary. She has served as a Presbyterian pastor in Bronx, New York, and as a chaplain in the U.S. Army until she retired 2011. She has published songs with Hill Top Records, and a photo in Hidden Silhouettes. She, her husband, and their dog live in Columbia, South Carolina.