My Race with Diabetes and the Oli 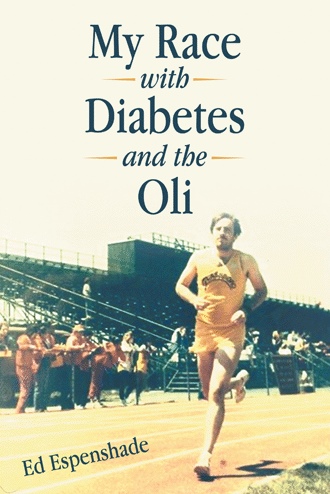 That Fateful Night 9-30-2003 It was to be a normal run, though it was a little late. My blood sugar was a bit high, but I had dealt with that before. I was heading out for about a 4 mile run. I was to do about mile and half warm-up, and once I got to Green St, which was a back road and start running hard. Though, I had my insulin pump for about year, this was the first time I got home, felt this hungry, and my glucose meter said my blood sugar was over 200. Since this was the case, I tried to fool my body by taking the amount of insulin to get it down, and drinking my normal amount of Gatorade. It was a simple workout, taught to me by Vince Phillips, my Cross-Country coach at Burlington County College (BCC) and had been doing it since I was 18. Since I was trying to make a comeback, I was only going to do one set on this night. This is a farlet (Swedish for speed play) workout where you run 50 steps hard, then 50 easier, 60 hard, 40 easier, and all the way up to 100 hard, then 10 easier, 90 hard, 20 easier, and continue then back 50 and 50. The idea is that each set takes about a mile and since I was on the first 80 hard and then I found myself face down on Green St. Like I said, this was a back street where there is little light. Suddenly, realized I had lost my eye glasses and apartment key. I could feel that I had dislocated my left shoulder. I figured my blood sugar had dropped to low and was having an insulin reaction. So I ripped open a Gu (taste like pudding and is 25 carbohydrates). In denial and/or shock, I figured I could call in sick the next day, drive to Lenscrafters, and get a new pair of eye glasses, in the Burlington Center. I should have knocked a friend's Chris Perron, who was a member of the Pineland Strider's, lived on the next block, on Green St. and asked him to call 911. Chris, Jr. was also a teammate of mine at Rancocas Valley High Regional High School. Instead, I walked about two miles home. I probably walked further home than I ran. I knocked on my landlord's door, John and Stephanie both answered the door, and they called my parents. They noticed that my elbow was bleeding. They also noticed that I had a cut over my eye. So I made my way to my apartment and tested my blood sugar, and it was in the mid 200s. I knew then, it was not an insulin reaction, but something else. When I got to emergency room, they cut my shirt off. My bleeding elbow, was actually a compound fracture. As I looked at elbow bone sticky out, I nearly vomited. It looked just the one in the Boy Scout Handbook. At that point, I was in full shock. At that point I knew I was lucky I that didn't bleed to death, on my ill-advised walk home. My elbow bone torn away the nerves in that area, so I did not feel it. They also took a cat-scan over my right eye, were they found the real reason for what happened. The next morning, I found myself in hospital room. I have no memory of how I got there. When I mentioned that it wasn't an insulin reaction to my primary doctor. He replied, yeah we noticed something on your cat-scram. I felt a little satisfied. Then, about 45 minutes later, he walked in with a neurologist who told me that I had a seizure due to a brain tumor. The feeling of satisfaction was over. The neurologist then told me they probably found on time. My first thought was that I had brain cancer and continued to believe this until about two weeks after my brain surgery. After a life long battle with diabetes, I figured I'd get the tumor removed and be done with it. I was eventually told that I had a Oligodendroglioma, a rare non-megalithic tumor. In other words, I didn't have cancer. I was later told that it was nicknamed, the Oli. For the remainder of this book it will called the Oli. I was later told, however if I had a brain tumor, at my age, it most likely be an Oli. My primary Doctor then told me surgery schedule as follows: The next step was to get my left elbow, and I'm write and eat with my left hand, back in working order. I eat with my left hand, and until the day I'll die, I will continue on eating on a far left corner of the table. By that time, they knew that I would need a lot MRI's (magnetic resonance image) companionable, not metal screws. I'll have three rubber screws in my elbow. Then I was to be taken to Thomas Jefferson University Hospital in Philly, in an ambulance for my brain surgery on Tuesday. However, the neurologist put a hold to this. The University of Pennsylvania Hospital (HUP) had one of the best brain surgeons in the world. It was a good thing he put a hold on it.

While growing up in Mount Holly, New Jersey, Ed Espenshade played catch with his dad, attended Phillies and Sixers games, and dreamed of being an athlete. But soon after he acquired a paper route as a twelfth birthday present, Ed was hit by a car while attempting to cross a road. After blood was drawn during an examination in the emergency room, Ed received shocking news: he had diabetes.

As his path took an unexpected turn, Ed describes how he became more determined than ever to pursue his athletic goals. After an unsuccessful attempt at soccer, Ed eventually found his home as a cross country runner in high school and college. It seemed that Ed was defying all odds as he continued to run hundreds of road races that included four marathons. But everything changed in 2003 when Ed found himself face down on the street during a training run and soon received another stunning diagnosis: he had a rare nonmalignant brain tumor. As he details his continuing journey with two serious health conditions, Ed shines a light on the importance of keeping hope, faith, and perseverance alive in the face of life’s greatest challenges.

In this inspiring memoir, a diabetic endurance athlete shares the story of how he has battled chronic illness by pushing through his hardships and never sacrificing his dreams.

Ed Espenshade graduated from Glassboro State College in Financial Studies. After graduation, he worked his way up from a bank teller to a senior auditor. He currently resides in Mt Holly, New Jersey, where he still runs. This is his first book.