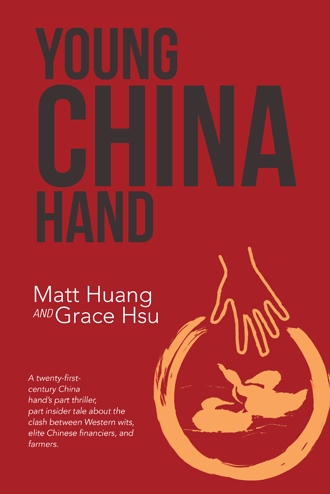 All-Stellar’s victory proved all too fleeting.
Just one day after our surprise takeover of DeeDee, we found ourselves under siege.
At around 10:30a.m., I was about to enter our office building when a rickety old yellow school bus screeched to a halt in the driveway. About forty middle-aged men waddled off the bus, still greedily sucking on their two-yuan-a-pack Five Cows cigarettes. From their tired faces and dust-caked overalls, they looked like they had just spent ten days straight laboring at a construction site without taking a shower.
They unloaded five large boxes and took out a bunch of bright red banners. Then the leader of the pack, like a tour guide leading a throng of gawking local tourists through Tiananmen Square, waved a red flag, signaling to the workers to follow him into the building
They laid out the banners carefully in the center of the spacious lobby, each piece of cloth lined up against another on the marble floors with military precision.
“Huanwo xuehanqian 还我血汗钱 (Return our blood-earned salary)!” one demanded.
“Zhongguo wansui中国万岁 (Long live, China)!” another proclaimed.
All-Stellar Asia Fund L.P’s Mandarin name and office address were prominently featured on all the banners.
The workers then marched back to the bus and unloaded crate after crate of Harbin Beer, blocking the entire entrance to the building. They leisurely fished out the bottles and lined them in neat rows behind the banners, all the while chattering in an indecipherable Chinese dialect.
Curious passersby gathered to watch, as the leader whipped out packs of poker cards and distributed them to the workers, who were already eagerly seated on the floor or on top of the empty crates. They launched into a rowdy game of dalaoer大老二 (Big Old Two), a popular poker card game played in China. Wads of one-yuan notes, gambling chips, and globs of beer-tinged spit were soon scattered all over the polished floor.
The building’s management had alerted Rebecca, and she rushed down to join me. We surveyed the mayhem in growing alarm, but did not dare to approach the revelers without our bosses’ instructions. So after I had informed the Singapore headquarters about this latest bizarre development, we hid in the crowd waiting to see what would happen next.
As I watched, images of John Tan and his shiny biker jacket suddenly flashed through my mind.
Panic surging through my veins, I recalled the empty construction site, and forced myself to confront the very real possibility that it was all an elaborate set-up. Had my own investment disappeared into a black hole? Had my judgment been so clouded by John’s show of professionalism and western management techniques that I had blindly put my trust in a conman?
I had little recourse to recover my money: a police report was useless; trying to sue him for fraud in court would be a protracted struggle; chasing him down would require copious time and resources that I could ill afford now, with All-Stellar’s investment in DeeDee on the rocks. “And it’s not like I could retaliate by sending protestors to John’s office to demand my money back,” I sighed to myself.
By now, it was almost noon. The demonstrators had set up the stage just in time for their target audience—the lunchtime crowd. More than a hundred curious onlookers had gathered. Some snapped photos of the raucous scene and gleefully posted them on their microblogs.
The workers, emboldened by the growing number of spectators, stopped gambling and started to shout slogans about the glorious justice of the Chinese Communist Party. The office building management did not dare to stop them from chanting, but they hastily circled some yellow barrier tape around the performers to make sure things did not spiral out of control. “The workers may exercise freedom of expression, but must be confined to linger and voice their views within this designated area,” a roly-poly manager nervously told the leader.
I could not help marveling at how quickly the tables were turned. It had taken us almost a month to devise a strategy to overthrow the incumbent leadership in DeeDee. But twenty-four hours were all Chairman Zhou needed to recover his footing, regroup his troops, and devise this outrageous demonstration to wrestle control of his company back from us. Enraged by the trap he had been lured into at the golf course, Chairman Zhou had launched a blistering offensive to make us regret starting this war.

Matt Huang, a young investment professional, arrives in Beijing before the 2008 Olympics aiming for gold. He hopes to win lucrative deals to impress his western bosses at All-Stellar, a high-profile, US$880 million private equity fund.

Matt’s first challenge is to gain the trust of Chairman Zhou, a militant entrepreneur whose firm Dominant Duck becomes All-Stellar’s first China investment. But he soon finds himself thwarted at every turn, as he grapples with conflicting interests and a complex web of special guanxi (connections).

A cataclysmic turn of events on the cusp of Dominant Duck’s highly-anticipated initial public offering turns Matt into a key pawn in a hair-raising corporate takeover battle across China. Pressurized to the point of being hospitalized, held hostage in a duck slaughtering house, betrayed, and disgraced, he still clings on to the dream of becoming a young Mr. China--until his princeling-linked nemesis shows his expert hand.

Matt Huang is an investment professional currently residing in China. A Singaporean who graduated from Stanford University with degrees in engineering and management in 2002, Matt has enjoyed a storied investment career spanning the globe, but nothing excites him more than living and working in China. He has been an avid golfer since his move to Beijing in 2008.

Grace Hsu worked as a financial journalist for ten years, five of which were based in Beijing, before becoming a freelance writer in 2014. A Singaporean who graduated with degrees in international relations and business from the University of Pennsylvania and the Wharton School in 2004, Grace currently splits her time between China, Houston, TX and Singapore.