by Bob Clement, With Dava Guerin & With Pete Weichlein 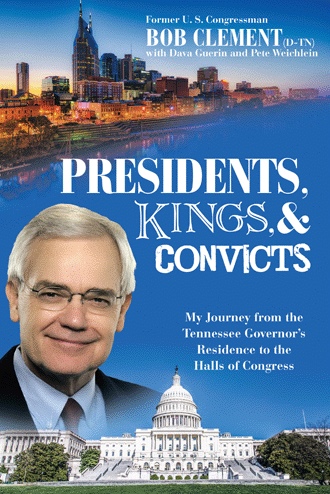 “The murderers were my best friends.”

Don’t call it the Governor’s Mansion

Most people would run for the hills if they ever met up with a prisoner, especially if that prisoner was a murderer. But to me, they were my best friends. They cooked my meals, and played basketball and football with me in the backyard. The best pals a kid could ever have. I guess you could say that my childhood was a bit unusual. That is, if you think criminals are your friends, your father is famous, and the mansion you lived in was to be referred as a “residence.” And if you add to that--state troopers surrounding your home, receiving death threats, and oh yes, having a monkey living in your bathroom—well, that’s just the beginning of my wonderfully colorful life.

I was nine-years-old when my father was first elected Governor of Tennessee on November 4, 1952. He was the kind of person that you just couldn’t ignore. To me, he was a giant. Tall, with thick wavy black hair, piercing sky-blue eyes, and a voice that could make people laugh and cry at the same time. He stood out among the crowd, and there wasn’t anyone in Nashville-or for that matter the entire state of Tennessee-- who didn’t know his name.

My mother, Lucille, was simply the most beautiful person inside and out. She could have been a movie star with Marilyn Monroe looks, and might have gone on to Hollywood had she not met and married Dad when she was just 19 years old. When Mother walked into a room, she took command of it, and not just because of her beauty. She had elegance and grace that .was truly unique.. That resolve would be tested over the years, as she would be faced with the trials and tribulations of being a political spouse, suffering from post-partum depression, and losing her beloved son, my youngest brother, Gary, at the age of 39.

I was born in Nashville, Tennessee, a city that has grown so much since I was a child. It is now one of the most cosmopolitan cities in the country in terms of diversity of jobs and opportunities, not to mention being known as “Music City USA.” When I was growing up, everyone knew one another and while it was a more innocent time, the 1950’s in our southern city was beginning to feel the tensions of segregation, and in great need of strong leadership. But, as a young boy, my thoughts were more focused on innocently mundane pursuits, like jumping in the lily pond or figuring out how to raise chickens and other farm animals.

During my Dad’s first race for Governor of Tennessee in 1952, we moved from Dickson to the Hermitage Hotel in Nashville where we lived for six months during his campaign. Since Dad was such a fan of country music, residing in the heart of Nashville was like a dream come true.

During the campaign, we would have some of the biggest names in country music at the time help him get out the vote, and they would appear together at political rallies and events. So, even as a young boy, I learned to love those heartfelt, gutsy songs, and the way folks like Johnny Cash, Eddy Arnold, Roy Acuff, Minnie Pearl, Loretta Lynn, and Little Jimmy Dickens sang them. This was the music of the people, and that’s what I wanted to be—just like them.

But I knew I wasn’t the average kid. After all, average kids wouldn’t be about to move into a real-live mansion. I must admit, the place was very big and imposing to me at the time. It was originally built by Ridley Wills, the vice-president of the National Life and Accident Insurance Company. He named it “Far Hills,” as a present to his wife. The house was situated on twelve acres of lush Tennessee land, and it had four floors, a winding staircase, and eight bathrooms. The Wills family moved in to Far Hills in 1931, and lived there for 18 years before they sold the property to the State of Tennessee for $120,000.

I will always remember my first visit to the residence. As a young boy I was particularly in awe of its size, and especially remember being fascinated with the lily pond which was about three and a half feet deep. Once we were settled in, we removed all of the fish and then drained the water and painted it. My parents filled the pond back up with water, and that became our little private swimming pool. I thought it was the greatest thing in the world!

Both of my parents wanted all three boys to grow up in a “normal” family environment, and would always tell us that that we were not the sons of a Governor, but just kids like any others growing up in the south at the time. We were allowed to dress like average young boys our age, though most of my friends didn’t live in a house with highway patrolmen stationed on the premises. Since I was the oldest son and the only child in the household for the first six years of my life, I had the advantage of having a great deal of attention from my parents as one might imagine. My parents named me after both my grandfathers-Robert and Nelson, in an effort to honor them. And not knowing whether there would be any other children, they named me Robert Nelson Clement.

It was only my mom and me in the house since Dad had a grueling work schedule; those were some of the best years of my life. My mother took me to kindergarten and picked me up each and every day. I never remember even having a baby sitter until I was nine when we moved into the Governor's Residence. I can't even recall when my mother wasn't there at my school volunteering, or cheering from the stands at my football and basketball games or other sports events. And she was as devoted a mother to my brothers too, wanting us to eat our meals together in the small dining room at the Governor's residences often as possible. . She was ever- present at all of our school functions, even serving on the PTA to make sure we were receiving the best education possible.

When I was a young child, right before I entered kindergarten, she made sure that I always had play dates with the other children in the neighborhood. I can still remember going to the park to play because we had one very close by. My kindergarten was adjacent to the park so my mother would often walk me to school, and I couldn’t have been more proud. . She even gave me my own bible and inscribed it with the words, “Bob, please read Proverbs and Psalms every day, they will teach you how to live your life.” I still have that bible to this day.

Mother was the key to my future in many ways because when I was twelve she enrolled me in speech classes that ultimately led to my joining the debate team in high school. That experience gave me the confidence to speak in front of groups large and small, and would come in handy when I accompanied Dad on so many of his campaign stops. After we moved to the Governor's residence, she also allowed me to host many social events throughout the years that we lived there, and let us run around the house in blue jeans and tee-shirts, not suits and ties or other formal attire that some people might expect of a public official’s children at the time.

Since the property was so massive, we had plenty of room to cause endless mischief, but mostly I concentrated on more productive pursuits—like farming.

I always loved animals. Dr. Walter S. Davis who was the president of Tennessee State University would bring a fresh turkey as a gift every year for Thanksgiving and Christmas. At the time, the university had a substantial farm on its property, and Dr. Davis inspired me to create my own farm at the Governor’s residence. While I was nervous at first to ask my parents if I could set up my agricultural operation, I remembered what they said about us living “normal lives,” so I wasn’t overly concerned that they would turn me down.

From a colorful youth growing up in the governor’s mansion, to a distinguished military career, and seeing firsthand the politics of world events during the second half of the twentieth century, Presidents, Kings, and Convicts tells the story of Congressman Bob Clement’s multifaceted life, and it reveals many previously untold stories about famous people.

This memoir narrates the shaping of his life as a moderate Democrat growing up in the south in the 1950s; it shares how Clement had a front-row seat to some of America’s most significant events since World War II; it provides insights on the current crisis situations taking place in the Middle East and around the world; and it addresses the dysfunction and lack of bipartisanship among the nation’s political leaders, as well as offers solutions for getting the country back on track.

Presidents, Kings, and Convicts provides entertaining and captivating behind-the-scenes accounts of some of Clement’s most memorable events and the people who shaped them. From personal stories of country music stars and other notable Americans, to the bipartisan meeting with the exiled king of Afghanistan and leaders of the Northern Alliance at the king’s home outside Rome, Italy, Clement offers insight into his event-filled life and his storied political journey.

Bob Clement, U.S. Congressman, D-TN, earned a B.S. Degree from the University of Tennessee and an MBA from the University of Memphis. He served two years in the U.S. Army and twenty-nine years in the Tennessee Army National Guard. Clement is president of Clement & Associates and was a distinguished leader in government, business and education, including eight terms in the U.S. Congress.