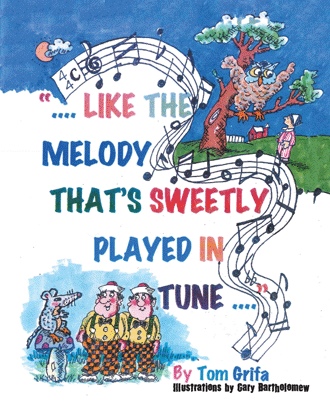 CHAPTER I - “A MIDSUMMER NIGHT’S DREAM”?

Imagine waking up to find a pink door in your room you’d never seen before. Would you go through it? Would you go get your parents? Or would you rub your eyes, sure your imagination was playing a trick on you?

That is what eight-year-old Meladie faced. When she wakes up one midnight, she discovers a mysterious pink door in her room that hadn’t been there before. Author Tom Grifa’s children’s book, Like the Melody that’s Sweetly Played in Tune, shares Meladie’s adventures after she goes through the door to a new outside world. Follow Meladie on a magical and mystical series of events that lead to her destiny. During her adventures she meets some interesting characters, including Puck the owl, who watches over her. Kate, a shrew mouse, leads Meladie through the maze of life. Although written primarily for children, it includes many allusions and references to great literature, which makes the book interesting for adults as well.

Like the Melody that’s Sweetly Played in Tune shares how one young girl was able to find her destiny through her imagination and sense of adventure. It encourages readers to use their imaginations as well.

Tom Grifa earned a bachelor’s degree in English and a master’s in education from Rutgers University. He earned his doctorate from Seton Hall University while serving as a school administrator in the New Jersey public school system. He and his wife, Judy, reside on Hilton Head Island, South Carolina.