Dark Horse of the American Revolution

by Ernest B. Lowrie 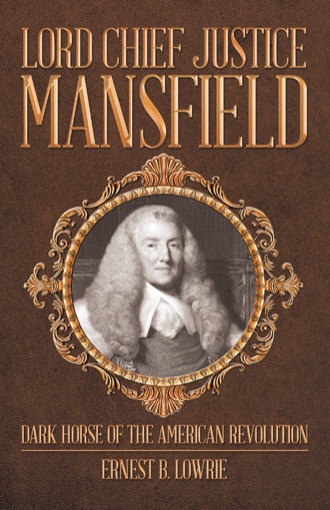 When the Continental Congress became bogged down over the vexed issue of representation . . . Benjamin Franklin cut through the predicted fears . . . by reminding the delegates that prior to the Union of 1707 the Scottish lawyers had "prognosticated that it would again happen as in times of old, that the whale would swallow Jonas," only to discover to their surprise after Scotland and England were united that "Jonas had swallowed the whale, for the Scotch had in fact got possession of the government and gave laws to the English." . . . Our latter-day Jonas was "Born at Scone 2d March 1704" according to the Old Style dating on Lord Chief Justice Mansfield's massive monument that dominates the West Aisle of the North Transept in Westminster Abbey.
[B]efore he became the Solicitor General in 1742 Mansfield had long experience with American affairs. He had represented several of the colonies before the Board of Trade. He was familiar with the border dispute between New Hampshire and Massachusetts, plus Rhode Island. He knew first hand about the dispute between Pennsylvania and Maryland over what became Delaware. He had extensive contact with Georgia in its dispute with South Carolina. Even Indian Affairs were not beyond his involvement. And from the outset of his political career, if not before, he had also claimed that Parliament by right could tax the Americans, and since at least the early 1750s it should. Now he told Grenville, "I wish you would employ somebody to look with the view into the origin of their [i.e., colonial assemblies'] power to tax themselves and raise money at all." Because he considered the colonial governments to be "on the same footing as our great corporations in London," what was problematical in his mind was whether the colonies had the right to levy taxes upon their own constituencies.
[S]ince at least early May [1769] Lord Chief Justice Mansfield had seized upon an opening into the heart of the Grafton Administration. The divided vote to preserve the tax on tea, while rescinding the tax on all the other items in the Townshend Duties, convinced him that the time was fast becoming ripe for, say, a palace revolution. So, he began to plot, secretly from behind the curtain, until Camden was turned out of office. Immediately George III offered him the Great Seal, only to have him refuse to accept it. But he "boasted of the offer," and of course it did not take long before "the secret" was trumpeted around town.
After declaring the Boston Tea Party to be the result of "over-lenity and want of foresight," Mansfield enlightened the remarkably full House with the insight that the destruction of the tea was "the luckiest event that could befall this country." Why so lucky? Because "all might be recovered" now that this "last overt act of high treason" had finally occurred. The ministry would be forced to assert Parliament's jurisdiction over the internal affairs of the colonies. In his opinion "compensation to the India Company" was not the object of the Bill . . . . The real object was to let the Americans know "that we should temporise no longer."
When the Empire was preparing to go to war [Mansfield's] influence permeated the highest levels of the administration as it came to embrace wholeheartedly the longstanding position he had promoted in season and out ever since the opening of the Stamp Act Crisis. Great Britain would now act firmly, decisively. As the dark horse of the American Revolution, no single person so thoroughly symbolized the ultimate British stance better than Lord Chief Justice Mansfield.

The American Revolution continues to resonate as one of history’s most important events, but most people fail to appreciate the role Lord Chief Justice Mansfield played in the conflict.

Ernest B. Lowrie engages in a serious rethinking of the causes of the American Revolution, explaining how Lord Mansfield’s decisions from his elevation to the Court of King’s Bench in 1756 until his retirement in 1788 gave Great Britain the firepower it needed to attempt to tax its colonies.

Lord Mansfield’s formal education turned on the Scottish legal system, and as a Scottish Law Lord, it was axiomatic in his opinion that the colonials ought to pay taxes to the imperial government.

After the Boston Tea Party, he decisively shaped the Intolerable Acts. When the British Army defeated the Americans in 1776, he was elevated to the rank of Earl of Mansfield. With the utter defeat of the British at Saratoga in 1777, however, events began to change. Soon France entered the contest, but Lord Mansfield never gave up until King George III was forced to sue for peace.

Get a detailed look at a dark horse of the American Revolution who played a critical role in driving the conflict.