(In the Land of the Fee) 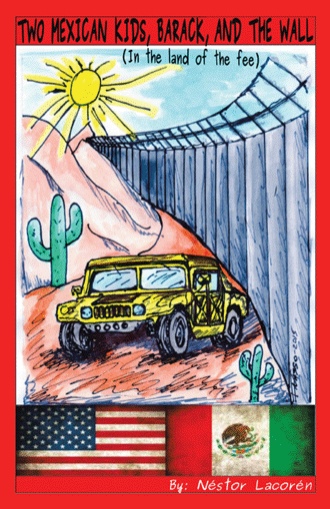 My name is Juan Sintierra and I’m the happiest kid alive. I was born in Sinaloa a few miles south of the Elota River, the only place in the world where the mountain range at a distance looks like a big, greenish Mexican poncho. The weather in my pueblo is very warm. If you sit down in any corner of my town and gaze long enough, you can see the reflection of the sunlight dancing a hot quebradita with the yellow dust. From time to time, a strong wind blowing from the north, carrying the sand and the debris to the foothill slopes, explodes like a mariachi fiesta enveloping the whole valley. Daily during the summer the wind and the sand, by the grace of God, get together and put on this special show just for me, little Juan Sintierra. Four times a week, while waiting for my primo Miguel to help him out with his deliveries and having nothing

else to do, I sit on the sand by the riverbank until dark and I think about my amigo Barack who lives faraway in the north. Since I can remember, I replay in my head, the picture of the beaten path among the mountains that eventually will take me to him. Barack is the presidente, the big boss, the mero-mero of the North, the first black president in the history of Gringo-Land. I still remember when a long time ago my abuela told me: “Brown is beautiful.”

Ever since, I kept imagining that the world was either brown and beautiful, or white and ugly. That we the dark ones, because of our hostility toward the whites, were always the problem, when in reality, if the browns and the whites worked together in peace, they could be part of the big solution for the world. Now, hoy, I finally learned that the real problem facing humanity is the colorless people, those folks that are so hard to see, that they are almost invisible. And when these pinches invisible chingones sense that the people in every walk of life are trying to get together, they will do their best to keep them apart by breeding hatred and fear among them. The colorless folks are those que tiran la piedra y esconden la mano, the same pinches cabrones who stoned and nailed Jesus to the cross. Anyway, who cares? All I want is not to be

bothered and have a chance to visit my friend Barack. I’m sure we can be like brothers and buenos amigos. I hope someday soon we’ll get together, shake hands and sit by the fire in his beautiful white house - that pretty white house built by hand by his ancestors - and have a long and smooth talk about the mexicanos’ and gringos’ similarities. We are going to be nice to each other, and nobody is going to hunt, hurt, kill or steal from nobody no more. Looking at the river, right there and then, I felt an uncertainty in the air, but at the same time a feeling of change, and the gain of new and unfamiliar things coming my way. “Maybe black is beautiful too, abuela,” I whispered, thinking about my friend Barack’s smiling

black face. Late as usual, Miguel came down the road very fast in his four by four yellow troca from the direction of the Culiacán-Mazatlán highway. Interrupting my thoughts, he nearly ran me over.

“Juancho!” he screamed. “Juancho por Dios, don’t think so much.”

I didn’t move. He got out of the pickup truck, leaned over and picked me up.

“Juancho. You are going to go crazy in the head. You are going to get sick from so much thinking.” Miguel was big, smart and quick, an extremely weird Mexican. He would always be the smartest person I’d ever known. He shook my shoulder, his long brownish face smiling at me the way a father smiles at his young son. My primo was my hero, my best friend and he was strong like a horse. Like a Mexican horse! Of course!

“Thinking is good,” I said. “You too should think sometimes primo.”

“I’m not sure that thinking is that good, Juancho,” he said hopelessly.

He plunged his entire big hand under the white canvas covering the back of the pickup truck and uncovered the cargo.

“Look what we have to deliver tonight,” he said.

“Looks like too much flour to me primo,” I answered nervously.

“Ain’t sure that the way things are right now, it’s a good time to do it.”

“Jesus Christ, Juancho! We can just as well ride off and hide forever, or do our job and kill those putos bastards, and take over the whole fricking distribution business once and for all,” said Miguel looking down at the ground in despair.

Suddenly his right hand went into his pocket.

“Do you have your revolver with you Juancho?” he asked.

“Juancho, we are not playing games here. We are not going to Father Bernardino’s church for Sunday mass you know. I don’t have to remind you that all the puñeteros carteles, the DEA and the federales are working together, and they are looking for us. If we see them, una de dos, we shoot to kill, or we run as fast as we can.”

“You told me that, two or three times already,” I said angrily.

“I just want to make sure you don’t forget it.”

Miguel walked to the driver’s side of the troca and got in. He laid back and crossed his hands behind his head. I sat down on the passenger seat, imitating every move he made, turning my head

to see what he was doing. Smiling he looked at me as if I smelled

“Juancho, I can get along with you so easily and so nice, but if you do not stop acting like a girl and making fun of me right now, I’ll kick your little sorry culo!”

For a moment we lay quiet in our seats, the motor running and

after a while Miguel said:

“Juancho, you know, you and me, we are gonna do very bad things tonight.”

“I really hope we don’t have to,” I whispered.

Suddenly pressing the gas pedal, he accelerated and made a U-turn in the direction of the highway at very high speed. He took off his baseball cap and threw it out the window.

“Miguel!” I said sharply. “For God’s sake, you have been drinking again! Are you going to go loco and trigger happy, like

“You should drink some tequila too, Juancho, for sure it will clear your head. Go ahead take a good big swig. It’s good for your little brain.”

Holding the steering wheel with both knees, he grabbed a half empty tequila bottle from under the seat. He smiled happily,

shaking the bottle close to my face.

“I ain’t sure it’s good tequila,” I said, trying not to make him feel rejected, “Looks kind of cheap to me.”

Miguel stared morosely at the road. The rims of his eyes were red and wet.

As Juan Sintierra grows up amid poverty in Sinaloa, Mexico, he dreams of one day traveling to America to visit his imaginary friend, Barack. Influenced by his cousin, Miguel Meromero, Juan carries out horrific crimes that lead him to be pursued by everyone including the police and powerful capos from the drug cartels.

Determined to report the truth about forty-three students killed in Iguala to Barack with hopes he can fix everything, Juan and Miguel decide to escape their enemies and flee to the United States. Although they are both determined to survive, they first must endure great tragedies along the way on both sides of the border. As Juan’s journey leads him to uncover dark truths about gringo-land that lead to murder and a series of life-shattering decisions, he discovers a new side of himself as he learns to embrace his identity and find hope among the ashes.

In this compelling novel, two Mexican kids escape the dark and violent world of the drug cartels and flee to the United States where they must face the truth, choices, and the reality about themselves.

Néstor Lacorén was born in Buenos Aires, Argentina. The former reporter is now a music producer and promoter who travels the world. Néstor currently resides with his wife, Helene, in New York City. Two Mexican Kids, Barack, and the Wall is his debut novel.