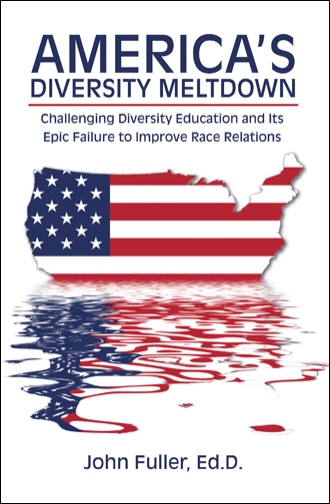 Very small keys can open very large doors. The key's design must be perfect. One such key, which could have opened the door to race relations, was damaged beyond repair through the epic failure of diversity education. A new key is required. Americans have been indoctrinated by a completely controlled diversity education agenda for at least the last three decades. The result is America's Diversity Meltdown. "Us versus them" and "we need more of me and less of you" are unspoken themes du jour.

Minority activist groups refuse to respect opposing views or beliefs or to include white males in positive dialogue, choosing to confront and blame rather than work together for progress. The visual is becoming quite clear. Our country has failed to repel radical diversity education and, instead, merely accepts, without question in most cases, whatever diversity education is presented. We have failed to meet the increasing challenges of racial relations head-on by at least including discussion of race relations in diversity education. Without significant white male input or involvement with diversity education from its inception, the goal of positive race relations was doomed from the start. Instead, America is transforming and being retrofitted by social agendas, special interest groups, political leadership, and the courts without the consent of the governed. America is becoming unrecognizable as the country I supported throughout my military career and lifetime. There are those who say that people who say something of wanting their country back are racist. That belief could not be further from the truth.

I want a country devoid of racial, ethnic, or religious animosity so that Dr. Martin Luther King's dream may, someday be achieved. Historical issues of the past still echo and will do so for eternity. These echoes, though, are becoming pounding drumbeats each day with those who wish to resurrect history and believe the same context exists today. Agendas are packed with false narratives and rhetoric believed by many but based upon filtered or no facts. We American citizens need not concentrate our fears solely on a nuclear arms agreement with Iran, combating terrorists, ISIS, illegal immigration, or other events outside of our country. These issues and threats are without a doubt dangerous. Yet the real battle in our country rages with the meltdown of our American diversity experiment. We are currently and tragically undergoing what was promised by President Obama: the fundamental transformation of our country. Replacing our nation's experiment with this new model of diversity emphasizing unquestioned support for special interests, is creating a nation unrecognizable by our Founding Fathers. Not only is the nation changing from their vision, many have forgotten the Founding Fathers themselves. Instead of continuing the formerly successful American melting pot with expectations of assimilating to the American culture, Americans are experiencing a diversity meltdown, due to non-assimilation of many immigrants who bring incompatible and possible volatile ingredients.

Participants attending diversity classes today experience self-described professionals who proclaim proudly that we are no longer a melting pot. That melting pot, they say, is old news. We are now according to these educators, some sort of a "fruit bowl." I am not sure about you but I would not like to be thought of as part of a fruit bowl! In my discussions with participants in diversity sessions, I speak to inclusion with the mantra that it is all about us. The American experiment, if it turns completely into a fruit bowl, will be as the confounding languages were to the Tower of Babel: a complete disaster of unrecoverable proportions. Our nation increasingly exhibits this fruit bowl mentality in many locations; the ultimate result is what will be America's diversity meltdown.

America's ongoing transformation includes those who wish to prioritize their heritage identities, communities of color, assignment of "white privilege," and special -emphasis recruitment programs in employment for groups that no longer need them. Individuals choose to set themselves apart as unrepresented, victims, or incapable of enjoying the freedoms that our Constitution has bestowed upon them. People should be proud of their heritage but put America first, and enjoy who they are now— as Americans.

When people encounter the word "diversity," they nervously maneuver around it or avoid the word entirely. It is as if it has no meaning, multiple meanings, or a mystical meaning— all of which can create, at times, confusion, agreement, conflict, or resistance. Some may choose not to mention the word at all for fear of being politically incorrect, misrepresented, racist, or somehow phobic in their views. Prior to the start of my diversity presentations, sometimes I hear participants speak with others and witness variable reactions, including anxious haughty laughs, scoffs, or smirks, as if diversity were a subject one should dismiss or joke about. Many of those before my class express to me that they have had all of this diversity stuff before. Most likely, some have developed these beliefs through their prior participation in mentally painful diversity classes. They merely want to get credit for what, often, is a mandatory class— and get it over with.

That is, until they participate in my presentation. I emphasize inclusion, I include white males in the discussion, and I offer a discourse they have never seen before. When a class sees me, a white male, retired military, and listens intently to my straight talk about this subject, they experience, many for the first time, how a true diversity class should be conducted. I enjoy watching them and noticing visual cues that indicate excitement about a topic they had previously avoided as much as possible. Many participants ask me afterward when I will return for another session and say this is the first time they have seen diversity presented in this manner.

From its inception, diversity curriculum designers disregarded Dr. Martin Luther King’s dream. Instead, they created a proverbial elephant in very uncomfortable classrooms extinguishing the respect and acceptance of instruction from white males.

Through the eyes of a dedicated diversity practitioner, America’s Diversity Meltdown goes behind the scenes to view the repackaged curriculum themes of “us versus them” still targeting white males for privilege, blame, and unconscious biases, but excludes them from meaningful dialogue. Here, Fuller recommends limiting the Equal Employment Opportunity Commission, affirmative action, Federal Special Emphasis Programs, and extinguishing diversity phrases from our diversity vocabulary such as “we have a long way to go,” “getting it,” and “we need more diversity.”

John Fuller, Ed.D., earned a doctorate in education and currently serves as the Chief Employee Engagement Educator for the Department of Veterans Affairs. He is a US Army Major, Retired and was a former US Marine Sergeant during the Vietnam Era.