Cooperating for Enhanced Survival in the Twenty-First Century 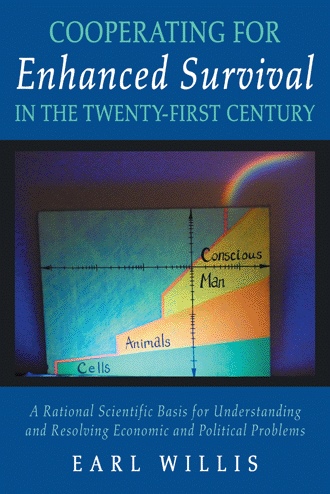 Reflective thought does not inevitably reach valid conclusions. For instance, history shows that real progress which is fueled by economic growth has always been a struggle, and that it has often been opposed. On one hand are people who have intelligently concluded that economic growth is not only desirable but also necessary to human survival, while on the other there are those who have just as intelligently concluded that economic growth is not desirable at all. Either the proponents or the opponents must be wrong. People have arrived at opposite conclusions even though both sides are presumably basing their reasoning upon observations, data, and realistic interpretations about the same real world. Such a dichotomy of perspectives seems to arise on almost every political, economic, and religious issue. This dichotomy of views cannot always be blamed upon ignorance of certain facts and knowledge by one side or the other, nor is it often clear that either or both have falsely applied logic and/or reason. Why should reasonable, logical people on both sides consistently derive such opposite conclusions? Perhaps it is a matter of what are known as “gut reactions” (predating one’s capacity for rational analysis), in which each side instinctively bases its considerations upon opposing premises (if one is true, the other must be false) that are buried so deeply that they are never examined. That condition would explain the consistent dichotomy of perspective. If a person implicitly adopts one side of an either-or hypothesis, and then his/her arguments are correctly constructed on that basis, those arguments would be expected to lead usually to a conclusion opposite to that of one who started on the opposite basis. Then each, reexamining and reaffirming his/her arguments, would believe the other to be completely wrong. Thus, each would incorporate different implications of that basic hypothesis into their perspectives of reality, and this would lead to deep philosophical differences such as do, in fact, occur. Such philosophical questions might seem to be quite remote from a scientific theory about Evolution, much less to do with current real-world political and economic analyses. However, consider the fundamental question of whether one owes his/her primary loyalty (a.) to one’s self (the individualistic instinct), or (b.) to a collective group (the herd instinct). Of course, depending upon the system and situation in which they find themselves, it is usually in one’s own self-interest to cede some if not all of his/her sovereignty to the group, and in that case, interests are aligned. However, there might arise situations where the interests of the individual do not align with those of the group, and at some basic level one must then confront this question of fundamental beliefs. It seems reasonable to propose that when one fundamental belief or the other has been accepted—implicitly and/or explicitly—it becomes integrated into the individual’s operating conceptual model of the real world, and that fundamental question would rarely if ever be reconsidered. That choice is automatically accepted as a premise that underlies that person’s reasoning and chains of logic even when it might seem far removed from the question at hand. It can be expected that tension over this fundamental individual vs. collective proposition must extend, either consciously or subconsciously, into both emotional and rational interpretations of different facets of reality. This would explain why there is a consistent dichotomy of understanding between those who start on one side of this fundamental proposition and those who start on the other. That might be at least part of the reason why it has been so hard to reach and maintain a rational consensus on so many issues. After all, even reasonable people can reach logical but erroneous conclusions if one or more of their initial assumptions is wrong. For example, consider as a premise that a person’s political philosophy is grounded in acceptance of either alternative (a.) or (b.), above. This would directly decide the fundamental political question of whether that person believes that (a.) political and economic freedom belong to the individual, and he cedes part of that to government, or (b.) the government owns political freedom and controls the economy, ceding whatever parts of the whole it deems appropriate to the individuals. If this question of basic freedom is asked directly, I believe that except for avowed collectivists, most people in the U.S. would give at least lip service to individual sovereignty —especially in their own cases. But those who end up on the Left seem instinctively to default to the collectivist claim that, except for some specific circumstances that must be clearly justified, the interests of individuals are best served by forfeiting their rights to the collective. They seem to think that any self-sacrifice (“Why Not?”) demanded by the collective is not only necessary but also noble. This is what underlies the socialistic (“PC”) view. However, those who believe in fundamental individual political and economic freedom take the opposite view. That is, they claim that, noble or not, the sacrifice of individual rights must be demanded only in cases that can be specifically and clearly justified (Why?). Thus, the dichotomy of political perspectives would result because the former (the “Left”) ask first “Why not?” while the latter (the “Right”) ask first “Why?” Observe that the former places the onus of justification upon the opponents of a proposal, while the latter places it upon the proposers.

In Cooperating for Survival in the Positive-Sum Universe, Earl Willis proposed that the universe is actually causal and positive sum.

This stance doesn’t mesh with current scientific theories, but he argues we need to look at the universe in a new way. In this companion to his first book, Willis elaborates on his theory that the universe is real, rational, and causal, and under that basis he proposes the theory of contropy.

This theory builds upon Darwin’s theory of evolution and further describes the evolutionary process to offer a new view of the world. It provides a simpler and more accurate description of reality than prevailing views.

Willis argues that his theory explains the dichotomy of perspectives between many reasonable, intelligent people regarding political, economic, and even religious issues. These differences all hinge on whether someone’s fundamental point of view is individualistic or collectivist.

Get ready to explore the philosophical, political, and economic implications of the theory of contropy, and find out how we can work toward a more positive future by Cooperating for Enhanced Survival in the Twenty-First Century.

Earl Willis is a retired chemical process engineer with two international patents. He has also produced record albums and written a play. He became interested in positive sum economics after an entrepreneurial project he was involved in created wealth. Visit www.contropy.net to learn more about these innovative concepts.